On Tuesday, we made the three-hour bus ride north from Calafate to El Chaltén, a climber’s and backpacker’s haven completely surrounded by the Parque Nacional Los Glaciares.

The entire town was built by the Argentine government in 1980 to buttress Argentina’s claim to the area in a border dispute with neighboring Chile, so unlike other parts of Patagonia we’ve been to, the streets are mostly paved. Odd, for such a small community, but I guess it’s kind of like our government’s “bridge to nowhere” in Alaska – government spending may not make sense to the taxpayers, but it makes sense to the politicians. 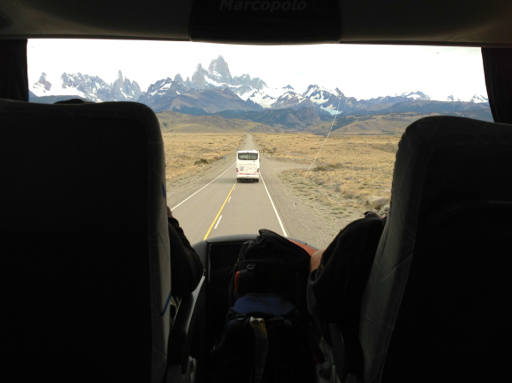 El Chaltén is well known in the professional rock climbing community because of two famous peaks that are accessible from town: Monte Fitz Roy (a/k/a Corre Chaltén); and, Corre Torre.

Arriving in El Chaltén, we stopped at the ranger’s station on the edge of town where Monte Fitz Roy was clearly visible (we could even see it in the distance from the bus – take a look at the picture, above):

Monte Fitz Roy is the tallest peak in Los Glaciares at 11,200 feet, 1,000 feet taller than nearby Corre Torre. Glaciers run down from both of these peaks and there are hikes from town to viewing points to admire the glaciers and mountains. We plan to do both hikes during our four-day stay in El Chaltén.

As we entered town on the bus and then walked to the laundromat, we noticed that everyone here has on hiking boots and is sporting a backpack. Young and old, everyone is here for the hiking.

But our first order of business is to do the laundry; and, this time, we’re not going to let anyone steal it!