Sunday morning, we awoke early to be picked up by Patrick and taken to the FIGAS terminal and airport, just a few minutes east of Stanley town, where we boarded our flight to Carcass Island with three others: an election monitor from Canada; and, two young women on holiday (former college dorm-mates), Alicky, a Brit who nows lives in the Falklands and works in conservation, and Michelle, from Singapore, returning from working on a scientific project in Antarctica. 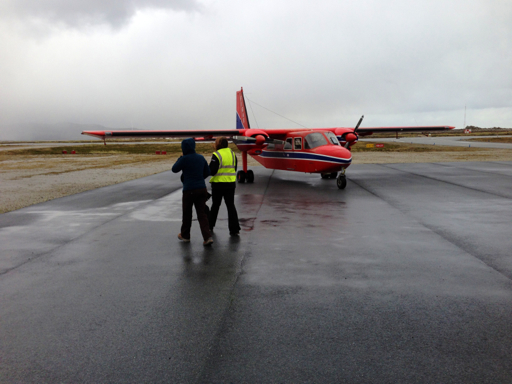 There was quite a lot of wind out of the southeast, pushing up fairly large seas.

Taking off to the east, we made a sharp left 180° bank and headed west, able to see Stanley town as we started on our journey toward Carcass Island.

Robinson Crusoe would have had a hard go of it had he been stranded in the Falklands. There are no indigenous trees; only grasses and small shrubs grow here natively. Nor are there any indigenous land animals. And the terrain, besides being very rocky, is mountainous.

Slightly more than 80% of the resident population of the islands live in and around the town of Stanley (and about the same number of British military personnel, say 1,800 people, live on the military base at Mount Pleasant). So, the several hundred farmers in the “camps” – the local term for the countryside, from the Spanish, “campos” – live in very remote locations and must, by necessity, be completely self-sufficient.

On our way to Carcass Island, we landed on a grass runway in Port Howard settlement to drop off the guy monitoring the voting there. 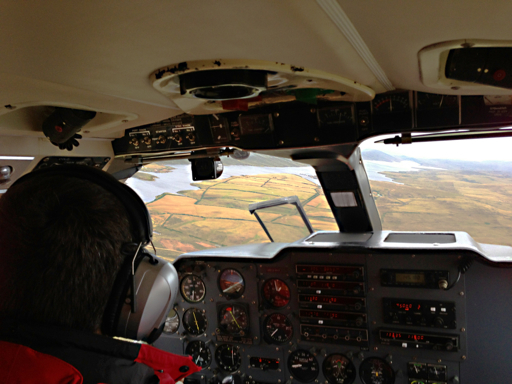 They call the rural communities “settlements” though many consist of only a handful of individuals. Here’s the Port Howard settlement (one of the larger ones at 20 residents) from the air as we approached. 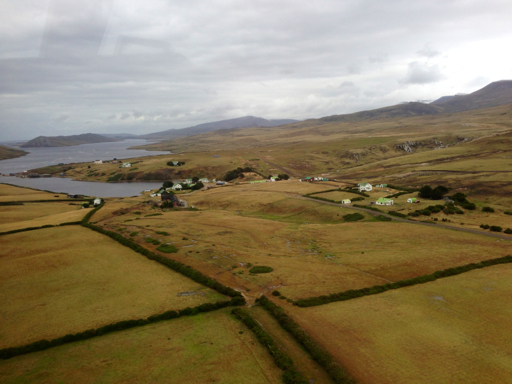 And here we are on the ground at the “Port Howard Airport,” as the sign on the “terminal” announces.

As we took off from Port Howard, we flew over the landing craft that functions as a supply ferry for the out-islands (it does not take passengers). Our destination, Carcass Island, gets all its supplies from this ferry when it visits Carcass every six weeks (the same for Saunders Island where we’ll be spending two nights).

After about another 20 minutes, we had a full view of Carcass Island through the windscreen.

The Island is about the same length as our home island of Plantation Key: 7 miles. But it is about 2 miles wide, compared to our 1/4 mile average.

But there’s a much bigger difference than the islands’ width. There are as many people living on our Plantation Key as there are in all the islands of the Falklands! Carcass Island has only 5 residents: the owners, Rob and Lorraine McGill, and the three Chileans that work for them.

Friends, of Patrick, they’ll be our hosts Sunday and Monday.