We were picked up by David around noon Wednesday and driven back to the settlement to wait for the FIGAS plane to take us back to Stanley. On the drive, we listened to the news analysis of the election results: 94% voter turnout; 99% of the voters saying “Yes” to the referendum question of “Do you wish the Falkland Islands to retain their current political status as an Overseas Territory of the United Kingdom?”

Rather than acknowledging the Islanders democratically-determined declaration, the Argentines have responded by saying, “Well, you’re all trespassers, so get out, anyway.”

Through rather contorted logic, the Argentines assert that they have a prior claim and these are their islands. You would think there would be some proof supporting such a position, given the aggressiveness with which the current Argentine administration asserts its claim to the Falklands. They also seem to have completely forgotten that they invaded and occupied the Islands in 1982, fought and lost a war over their sovereignty claim, and were repulsed and evicted by the British!

As we approached the settlement, Suzan came on the radio to inform us that the plane would be landing around 2:00, so I asked David if we could stop at the old, original British settlement at Port Egmont; he said, “Sure.”

The British first landed in the Falklands on Saunders Island in 1765, where they proceeded to build a blockhouse, several out buildings, a wharf and defensive fortifications.

We walked down to the remains of the blockhouse… 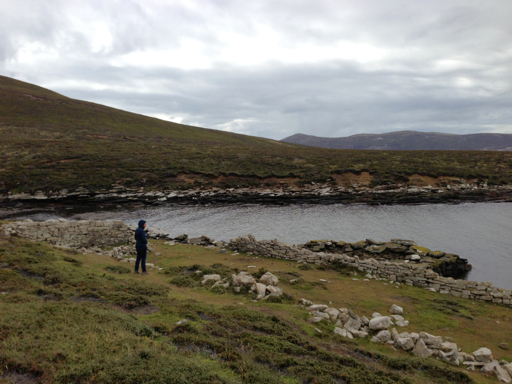 …and then David and I walked out on the wharf, from which I took this picture of the remains of the blockhouse, Dale in the Rover, and an historical plaque up on the bluff.

Given that Argentina didn’t exist as a country until 1816, I think someone might want to point out to them that the British beat them to the Falklands by more than 50 years. And the Brits claimed the Islands as their own way back then.

Problem solved. Maybe they just needed a good lawyer to make their case.