Thursday morning, before Gavin left, Derek offered us the choice of hen’s eggs or Gentoo Penguin eggs. I opted for the Gentoo eggs, over medium, with a side of bacon. 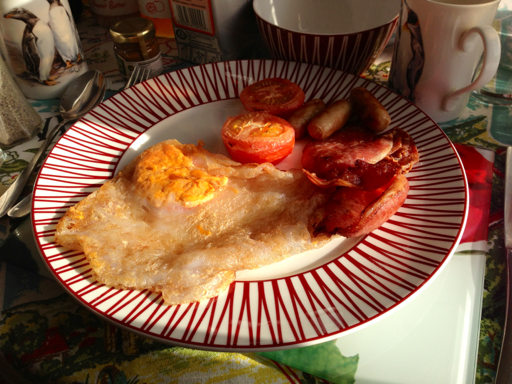 One Gentoo egg was the equivalent of three hen’s eggs. The whites had the consistency of silicon and the yolks tasted like fish. Let’s just say that it’s an acquired taste.

After breakfast, on our way down to see the King Penguins, we sat on the beach, watching the Gentoos departing for a day of feeding at sea.

As we sat, a curious group of them quietly padded up behind us…

…coming within three feet or so. When I turned around, they seemed to look off in different directions as if they were pretending not to notice me. It was quite funny. They had a “who, me?” kind of air about them. 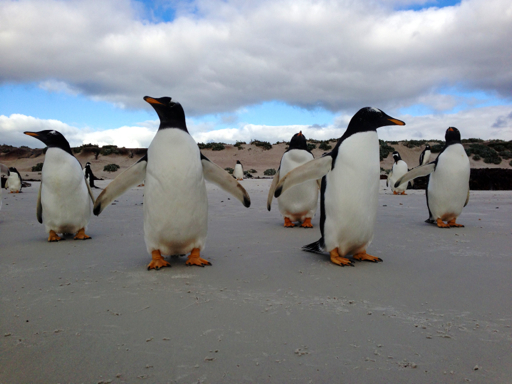 We walked further down the beach to the rocks at the end and climbed out on an outcropping to watch a group of juvenile Gentoos learn how to swim (at least that’s what it looked like to us).

They would dive into this little tidal pool, swim violently around in circles, and then slide out onto the sand. 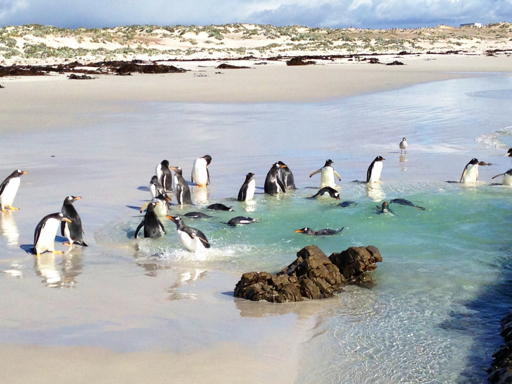 Sometimes, they would then get out of the water and run/waddle around in circles as if saying, “Hey, I did it! Look at me; look at me!” 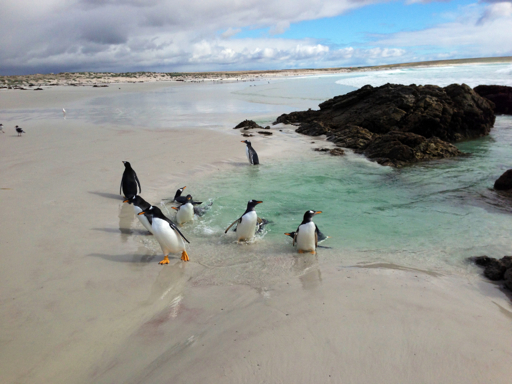 From here we went up to look at the Kings (my prior post), then went back to the house for lunch. In the afternoon, on our way back to visit the Kings, we walked the beach again, once more attracting the curious when we sat quietly at the water’s edge.

Volunteer Point has a fantastic beach, about a mile long. And there was great surf that day, though you’d have to wear a dry suit, which I wouldn’t be interested in doing, even if I had one.

Thursday evening, Derek and Trudi had another guest in place of Gavin: an Englishman named Clive who had immigrated to the Falklands in the 1970s. Derek had picked him up on his way back from Stanley after dropping Gavin off to repair the wind generator. It was interesting getting his perspective on the Falklands, though we would have preferred a little more solitude during our stay at Volunteer.

We left Volunteer Point with Derek early Friday morning and were dropped off at the Malvina Hotel in Stanley where we’re spending the night again.

Tomorrow, Saturday, we fly back to Punta Arenas, Chile, then, on Saturday, we’ll be taking a day-long bus trip to Ushuaia, Argentina, our last destination before starting our return home via Buenos Aires.