We have a rental car here in Ushuaia, which enables us to get out of the city.

Argentina has much to offer in its natural landscape, but the cities – outside of the tourist areas – tend to lack most of the public infrastructure that we take for granted in the USA, like decent roads, traffic signs and signals, zoning, building codes, garbage collection. You get the picture.

So, today we decided to drive 50 miles east along the Beagle Channel to the original european settlement of Tierra del Fuego, Estancia Harberton.

The Beagle Channel is named after the ship that brought Charles Darwin to Tierra del Fuego in 1833, H.M.S. Beagle. Like the Strait of Magellan to the north, the Beagle Channel connects the Atlantic and Pacific Oceans, but its use is limited to smaller vessels. The third navigable route around South America is the Drake Passage and Cape Horn at the end of the continent.

This is the Beagle Channel where it runs along the southern shore of Estancia Harberton. 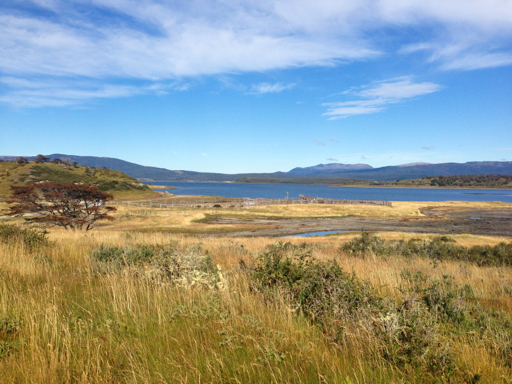 Estancia Harberton was the name of the ranch of Thomas Bridges, an English missionary from the Falklands turned sheep farmer in the late 1800s. Bridges, born in 1842, had run the Anglican mission to the Yámana indians on Tierra del Fuego, but he resigned that post and was granted 20,000 hectares (about 50,000 acres or 77 square miles) by the Argentine government in Tierra del Fuego for his efforts, upon which he built this ranch in 1886. 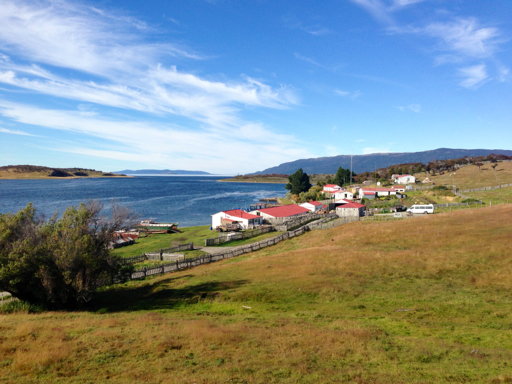 Bridges’ father-in-law was a carpenter in England and he built the original residence house there, then numbered the boards and components, loaded them onboard a ship, and sent them to Tierra del Fuego where the house was reassembled. Our guide called it the world’s first pre-fabricated home. Here I am, standing in front of the original house (the second floor was added later), next to a whale-bone entry arch. 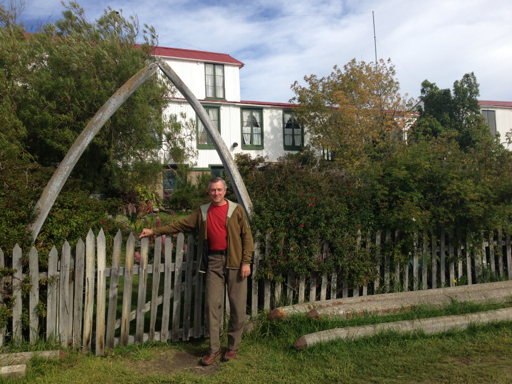 We toured the outbuildings along the waterfront where the Bridges family had their workshops, mill and sheep-shearing sheds. 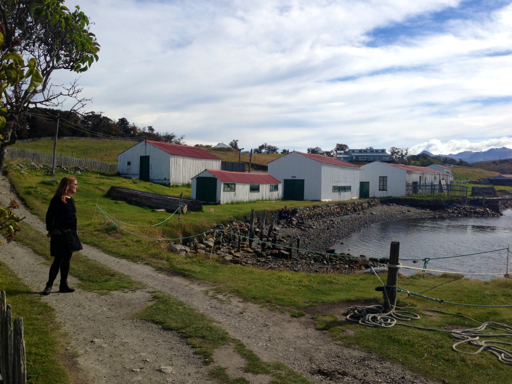 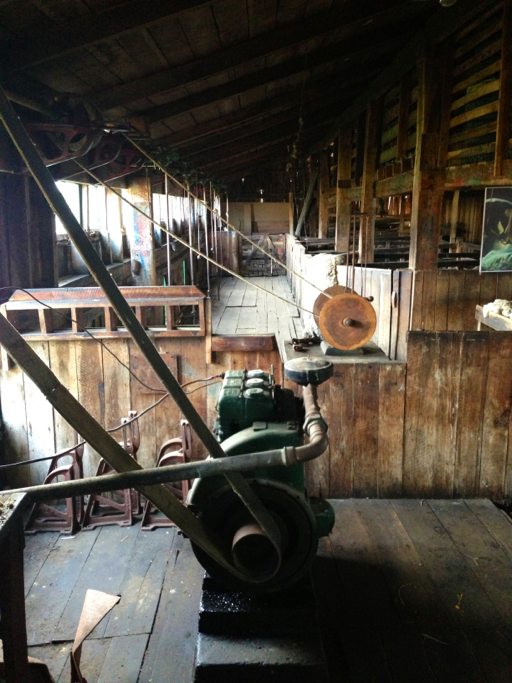 …that powered six automatic sheep shearing tools (on the left). The sheep were temporarily kept in the pens to the right (behind the shorn fleece draped over the rail) while waiting their turns. 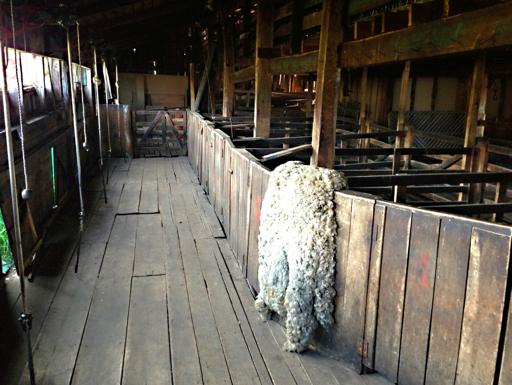 The Estancia was an active sheep ranch, operated by Bridges descendants, until 1995 when a 9-foot snowfall killed 80% of the 20,000 sheep on the ranch. Although Bridges family members still reside in the house, the property is now designated as an Argentine National Historical Site and only four sheep remain on the property, so it no longer functions as a ranch; it is now a tourist site.

Until 1973, there was no road to Estancia Harberton and all of the wool produced here had to be shipped by water. With the exception of these derelict craft… 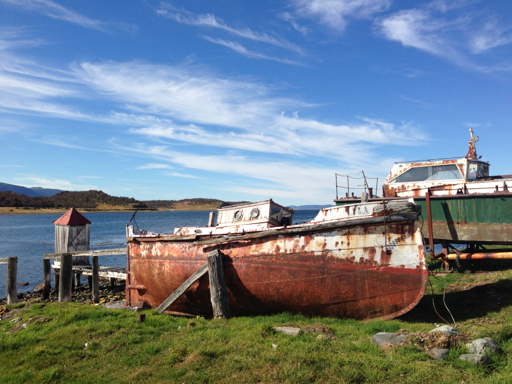 …the only boats here now are the two penguin excursion inflatables and the big motorized catamaran that brings tourists to the Estancia from Ushuaia, a 3-hour boat ride up the Beagle Channel (we were the only people that came overland to visit today).

It was a beautiful drive back out from the Estancia through the former pasture lands. 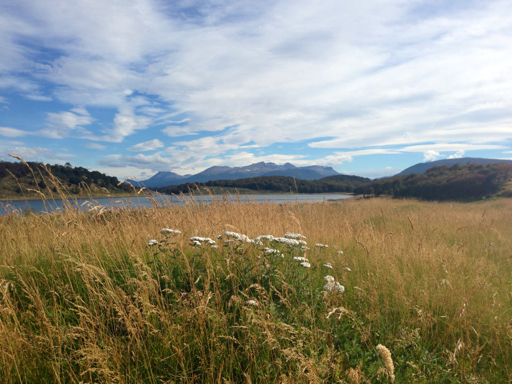 When the road turned inland, we decided to continue along the waterfront, ultimately finding ourselves at a small Coast Guard or Naval station on the Channel. Whatever it was, it was well-armed, with at least four permanent gun turrets that we saw! 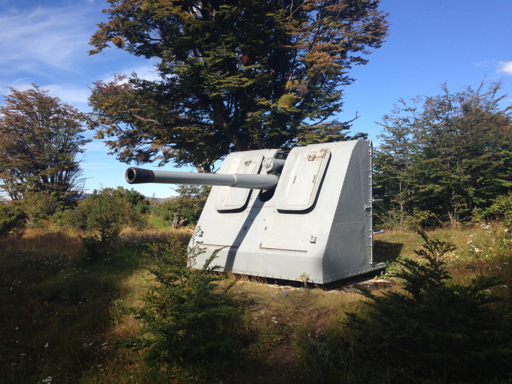 Perhaps the Argentines are preparing for an invasion from the Falklands! After all, a Falkland Islander was the first to settle Tierra del Fuego, so it seems that their claim to this island is at least as strong as Argentina’s claim to the Falklands!

At any rate, when we got back to Ushuaia, we passed this sign. The “Malvinas” is what the Argentines call the Falkland Islands. 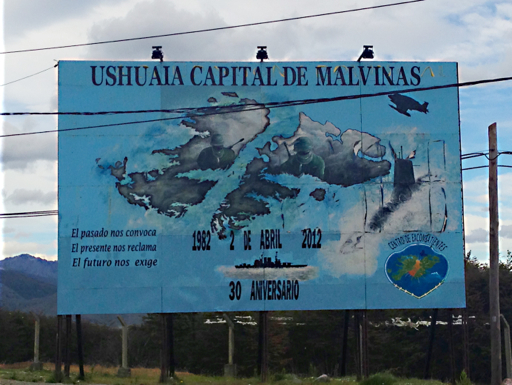 I don’t think the relationship between the Falklands and Argentina is destined to improve for some time to come.