Having rested a few days from our race around Jutland, we departed for our next adventure Tuesday afternoon: a mini-cruise to Oslo, Norway.

DFDS Seaways runs two ferries daily between Copenhagen and Oslo. They call them ferries because they carry cars and trucks, but, as a practical matter, these ferries are cruise ships, complete with cabins, restaurants, lounges, duty-free shops and a casino; one of the ships even had a pool.

Before boarding, we watched the vehicles get loaded aboard. They had an ingenious way of backing the semi-tractor-trailers and tankers into the hold. The driver would swivel his seat around 180° in the cab, then “back up” while looking straight ahead; it was like turning the tractor-trailer cab into a forklift with the steering wheels in the rear.

Anyway, the two DFDS ships – the Pearl Seaways and the Crown Seaways – simultaneously leave port at 4:30 p.m., one departing Copenhagen as the other departs Oslo. They pass each other going opposite directions in the wee hours of the morning and then arrive at opposite ports the next morning at 9:45 a.m.

Here’s Dale on the top deck of the Pearl Seaways, surveying Nordhavn Basin, the ferry terminal for Copenhagen, before we cast off. The ship we’re on looks a lot like the one in the distance.

Like the way we travel, generally, we tend to be out of sync with mainstream tourists in our travels; hence, the title of my blog, “The Road Less Traveled.”

There were obviously quite a few hardcore cruisers on the ship who knew exactly what and when to do everything, such as: a) immediately make dinner reservations as soon as you board (before they fill up); then, b) get thee to the afterdeck ASAP to grab a chair (before they’re all taken) and a beer or tropical drink (it was disconcerting hearing people ordering Piña Coladas and Mojitos this far north).

There was a great view of Copenhagen off the stern as we made our way into Øresund, the easternmost strait that separates Denmark from Sweden.

As you can tell, we did not get a chair on the afterdeck at prime time; however, about an hour into the journey, the herd bolted for the buffet, leaving the entire afterdeck abandoned to us! Go figure. 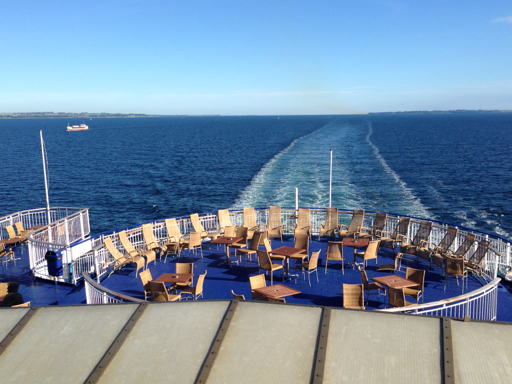 We were able to see both the Danish and the Swedish coasts as we made our way north through the Øresund, passing Helsingør, Denmark, on our port side and Göteborg, Sweden, to starboard, before entering the Kattegat that flows into the North Sea.

There’s a ferry service between Helsingør and Göteborg (Gothenberg) and I took a nice picture of it as it crossed our path, looking into the sun.

After the early seatings in the buffet had cleared, we ate, then headed for the lounge at the stern of the ship to see what they had for entertainment.

The band was okay, but the real entertainment for us was watching this Chinese tour guide do her best to get her group up onto the dance floor, without success.

We only stayed for one drink (alcohol was outrageously expensive on the ship and in Norway), then called it a night so that we could be up early to see Norway as we entered the Oslofjord the next morning; here it is, Wednesday around 6:30 a.m.: 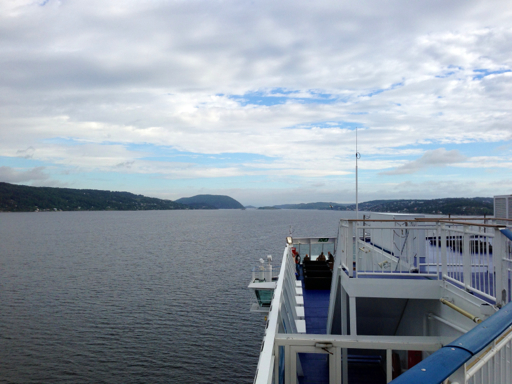 Another cruise ship followed us into the fjord.

About halfway into the Oslofjord, we passed a small islet that had been converted into a military installation by King Christian IV (remember him, Christian the Builder) in 1644 when he was king of both Denmark and Norway.

Named Oscarsborg Fortress in the late 1800s, it was improved with 28cm caliber guns and an underwater torpedo battery. It’s location in the middle of the Oslofjord made it a very strategic defensive obstacle for any invasion of Oslo which, by the time of the Second World War, was the capitol of an independent Norway.

So, when the German Navy invaded Norway in April 1940, they were surprised when the little fortress stopped them dead in their tracks by sinking the heavy cruiser, Blücher, with torpedoes, thus managing to prevent the Norwegian King and government from being taken prisoner!

The torpedo battery at Oscarsborg Fortress remained secretly active until 1993, when it was disabled, and in 2003 the island was converted into a tourist resort.

A little further into the fjord, we came to the narrowest point of the channel…

…before being greeted by these picturesque little lighthouses… 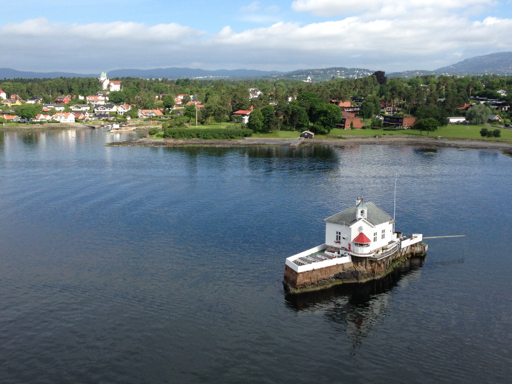 …as we entered Oslo Harbor.