On our trip to Norway last week, we traversed the Øresund, the strait that separates Denmark from Sweden. The narrowest point of the Øresund is between Helsingor, Denmark, and Helsingborg, Sweden. Here’s a map of our travels in North Zeeland. This post is about site #36 on the map, Kronborg Castle at Helsingor. 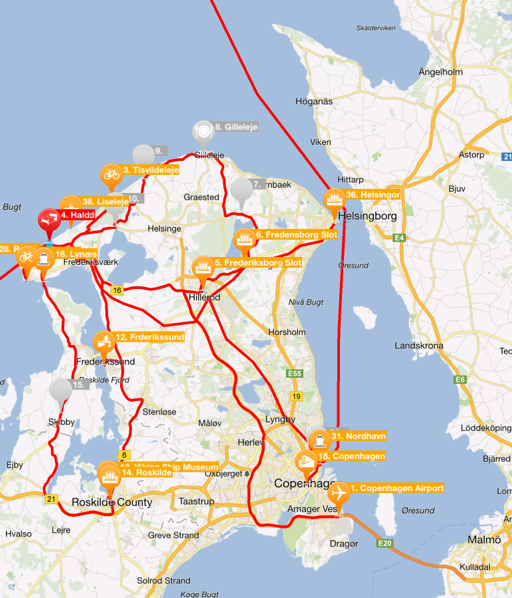 Way back in my post about Roskilde Domkirke, I commented that under Queen Margrete I (1375-1412), Denmark, Norway and Sweden were all united, with Margrete as their common monarch. This was known as the Kalmar Union and it lasted from 1397 until 1523, when part of Sweden (around Stockholm) broke away. But Scania, the southwestern-most part of modern-day Sweden continued as part of Denmark until 1658.

I mention this so that you will understand that for more than 250 years, Denmark held both shores of the Øresund which allowed it to effectively control all shipping between the Baltic nations and the rest of the world because the Øresund narrows to only 2 miles at its narrowest point between modern-day Helsingor and Helsingbord.

In the 1420s, Danish King Eric (of Pomerania) built a stronghold he named Krogen for exactly that purpose; it was built on the Zeeland side, across from a fortress called Kärnan on the opposite (now Swedish) shore that he also controlled. Henceforth, all ships wanting passage through the Øresund would be required to pay a toll of one Rose Noble, an English-minted gold coin, to Denmark for the privilege of doing so.

In the late 1570s, one of Eric’s successors, King Frederik II, decided to rebuild the medieval fortress of Krogen into a much more impressive and powerful Renaissance castle that he called Kronborg.

Here’s a view looking back on Kronborg Castle from the Øresund as we traveled through it on our way to Oslo:

Yesterday, Sunday, we decided to take the train to see Kronborg Castle. We took the bikes along so that we could do a little cycling around Helsingor while we were there. 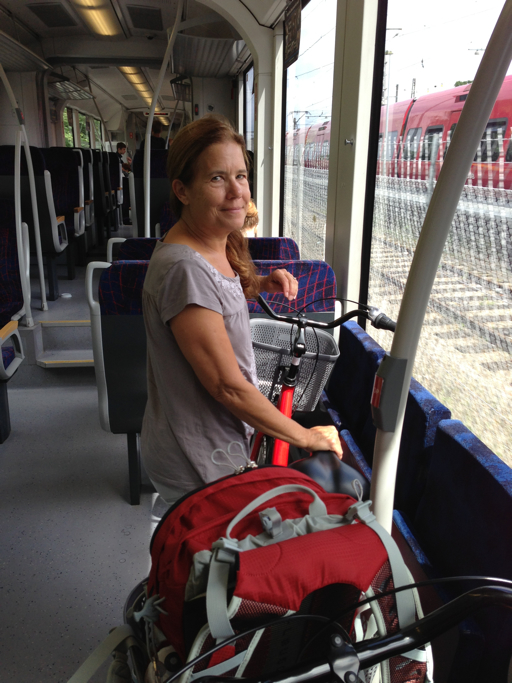 Kronborg Castle was an impressive site as we biked toward it from the railroad station.

In the foreground, above, you can also see the recently installed (2012) polished steel statute called “Han” (meaning “He” in English), which looked to me like a cross between Copenhagen’s Little Mermaid and Chicago’s Bean. 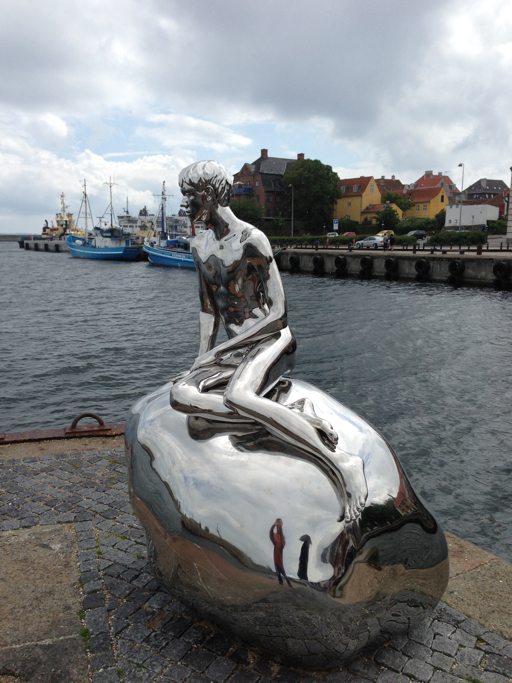 From inside Kronborg Castle, it was easy to see how the Danes were able to control the Øresund and extract the Sound Dues for so long. Here’s one of Kronborg’s gun batteries; that’s Sweden in the background:

The custom was for ships in the sound to signal their willingness to pay the Sound Dues by lowering their topsail or dipping their flag. If a ship failed to do so, a canon would fire a warning shot and if the ship continued to ignore the fortress, a gunboat would go in pursuit or the ship would be shelled. Any captain guilty of passage through the sound without payment of the Sound Dues would be executed. Needless to say, enforcement was nearly 100%.

Over the years, the King realized that he was loosing money because larger ships carried more cargo, so the calculation of the Sound Dues changed to be based upon the value of the cargo. To avoid having the ships’ captains undervalue their cargoes for purpose of toll calculation, the King claimed the right to purchase an entire ship’s cargo at the declared value. Pretty good idea, eh?

In 1629, Kronborg Castle went up in flames (with the exception of the chapel) as a result of a fire intentionally set by some disgruntled workers, but King Frederik II’s son, Christian IV, rebuilt it.

I mentioned several posts back that King Christian IV had led Denmark into wars with Sweden. One of those wars took place in 1658, resulting in the siege and capture of Kronborg Castle by the Swedes. At the conclusion of that war in 1660, Denmark not only lost all of the furnishings and artwork in Kronborg Castle as bounty, but Sweden was also given Scania, the lands on the shore opposite Kronborg, thus making it possible for ships to now avoid Kronborg’s canons by hugging the Swedish coast.

Nevertheless, the Danes kept on trying to collect the Sound Dues, with some success, until, in 1857, Denmark bowed to international pressure and ended the toll (extracting a one-time payment in the aggregate amount of 67,000,000 DKr from the affected nations for doing so).

Here are two views from the interior courtyard of the palace, restored to how it looked when Christian IV held it:

And here’s a view inside the chapel; that’s the King’s “pew” on the upper left, opposite the pulpit. 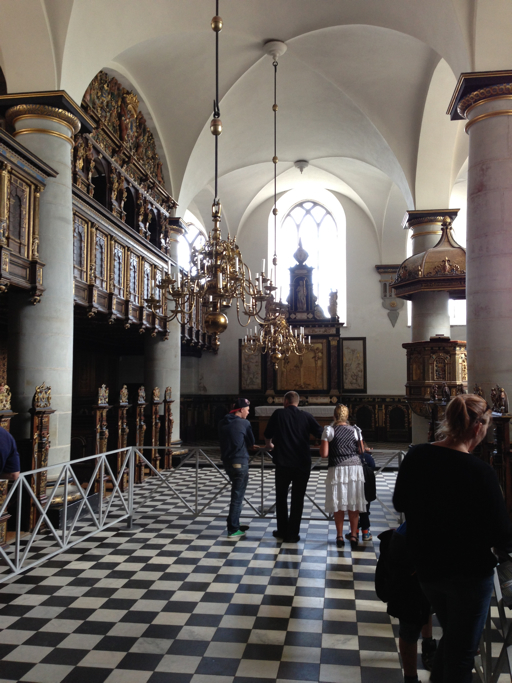 Kronborg Castle was the scene used by William Shakespeare in his play, “Hamlet,” though he called it Elsinore Castle (I think that Helsingor in pronounced “Elsinore” in English). After touring the interior of the castle, we went into the “casements” below – the underground soldiers’ quarters. It was easy to get into the dark mood that I associate with Hamlet.

It was nice to get back outside for our trip back to Hald.