Bordeaux wines are known around the world and when it comes to the red Bordeaux wines, the Médoc region is probably the best known of them all. The Médoc region, lying on the Left (West) Bank of the Gironde River, has historically been split into the Haut-Médoc (“Upper” or upstream) and the Bas-Médoc (“Lower” or downstream), though now-a-days, the Bas-Médoc is simply referred to as the “Médoc.”

Supposedly, grape vines were first planted here by the Romans, but the place really didn’t take off until the 1600s when the then marshy lands were drained and cultivated. By the mid-1750s, the gravelly, sandy soil had proven to be excellent for growing grapes and the region flourished until pestilence nearly destroyed all the vines in the 1800s. The industry was saved, however, by grafting local vines onto root stock imported from the United States and it has been smooth sailing ever since.

Grayan, where we are staying, is just on the western edge of (Bas) Médoc and July 4th seemed like a good day to go see what American stock had bred here in France, so we put down the top and went off to see the wine country. 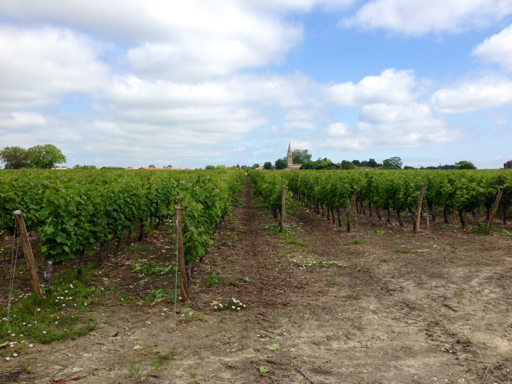 Passing through Saint-Seveur in the Haut-Medoc appellation (more on what that means later), we decided to stop at the Chateau Fontesteau when we saw a road sign indicating that they were open for visitation.

We were greeted by Julia who told us we were the first Americans to visit the vineyard this year and she was happy to give us a tour of the Chateau which also gave her a chance to practice her English (by the way, when I asked, she said that she could not distinguish our accent from her British visitors; I told her that was because they had had a long time to practice).

After explaining to us the different varieties of grape cultivated here (Cabernet Sauvignon, Merlot and Cabernet Franc), Julia described the process by which the grapes are harvested, culled and separated from their skins – all mechanically – taking care not to crush the seeds in the process.

She then let us in to see the vats where the initial fermentation of the grape juice takes place. 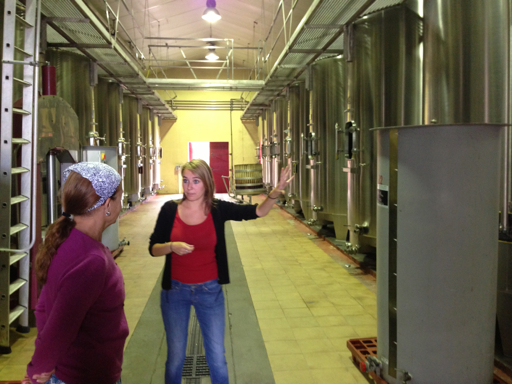 To make red wine, the pulp, called “must,” is fermented, together with the skins, in these vats. It’s the skins that give the wine its red color. The initial fermentation takes about 10 days and the skins ultimately settle toward the bottom of the vats and are eventually removed and pressed to retrieve as much liquid as possible, then the skins are discarded and the different grape varieties blended together in the proportion that the Chateau has determined (or is required) to produce. The Chateau Fontesteau’s most popular wine is mixed 60% Cabernet Sauvignon, 30% Merlot and 10% Cabernet Franc.

Following the initial fermentation process, the wine is transferred to oak barrels, each containing 900 liters, and stored here (for about a year) while it further ferments until it is ready to be bottled and sold: 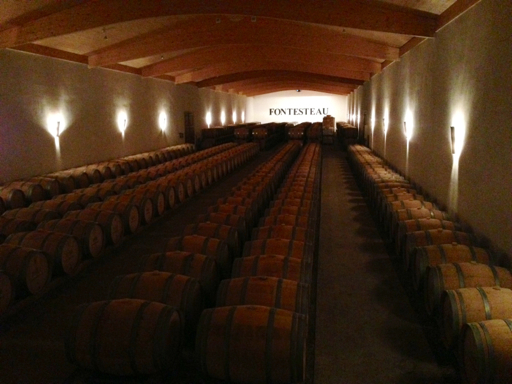 After the tour, we were treated to a wine-tasting of most of the vintages on hand. We bought one of each (about 12€ or $16 per bottle, on average). 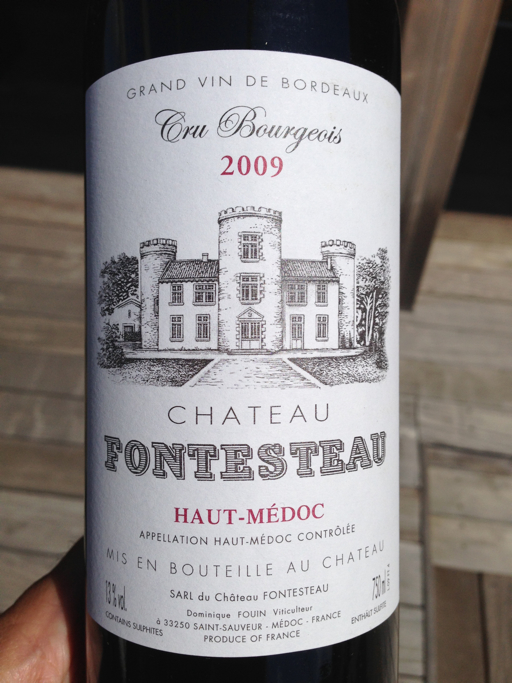 Hmmm, that building on the label looks familiar. Oh, yeah, we saw it on the way in: 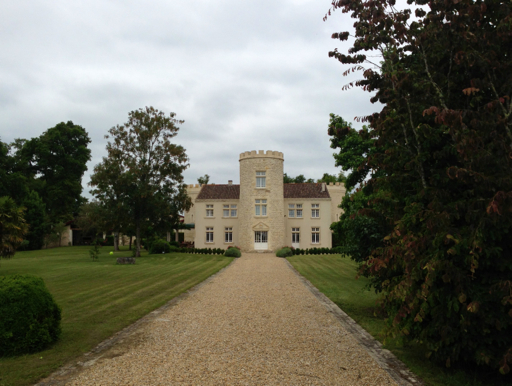 It’s the Chateau Fontesteau, the mansion house, originally built in the 1100s, but destroyed in the French Revolution of the 1790s and rebuilt within its original foundation in recent years. It was quite a grand building. Here’s a view from the rear. 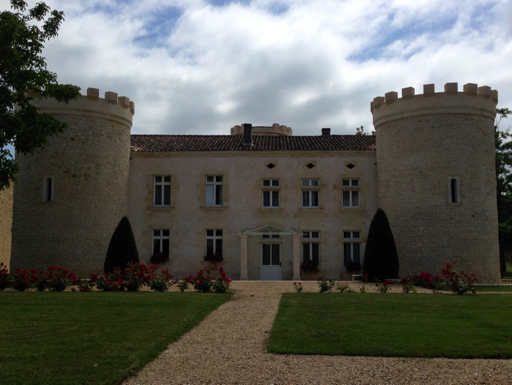 Time to get on the road. There are over 1,500 vineyards in the Médoc, so we’ve got to get moving, but we’re really glad we spent extra time at this one. 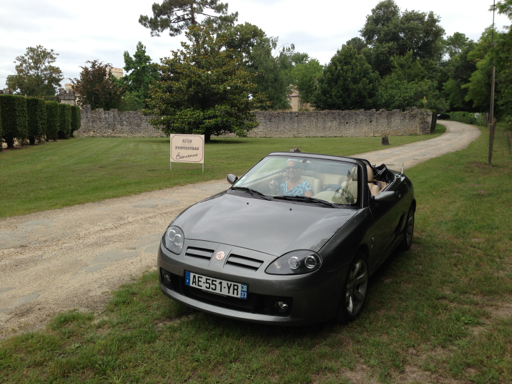