I always thought that a “chateau” was a mansion house and that does seem to be the normal use of the word; but, it turns out that here in Bordeaux, a “châteaux” is actually a vineyard – and it may or may not have a mansion house attached to it.

There are so many châteaux here in the Médoc region (more than 1,500), it was difficult to determine where to go and what to see.

So we cheated. We picked up a brochure, “Circuit: architecture des châteaux,” and followed the route suggested there, supposedly a 3 hour, 42 mile drive, passing 67 châteaux.

The Médoc region is divided up into 8 appellations which are legally prescribed and regulated geographic areas defining the wine that is grown there. I have read several descriptions of the French wine regulation system and I still don’t completely understand it, but the general idea is to make sure all the vineyards in an appellation adhere to growing the same types of grapes, the same way, on the same soil type, harvested and produced in the same way, all in order to maintain consistency and identity for the wines made there.

From the north to the south, the 8 appellations of the Médoc region are: (Bas) Médoc, Haut-Médoc, Saint-Estéphe, Pauillac, Saint-Julien, Listrac, Moulis and Margaux.

After leaving Fontesteau and driving through the village of Saint Sauveur, we passed by the Châteaux Peyrabon which was also in the Haut-Médoc:

We pulled in to take a picture of the mansion, but didn’t stop because we didn’t see any signs indicating that tours were offered.

We continued our drive and soon got lost, not that it mattered since the countryside was gorgeous no matter where we turned.

Back on track, we passed through another village, Saint Laurent Médoc, then pulled in and out of a couple more châteaux. This one, Châteaux Lagrange, in the Saint-Julien appellation, was worth a picture:

Although the roads were well marked, there were so many châteaux that it was hard to figure out which way to turn sometimes. It just took too long to sort out the signs. 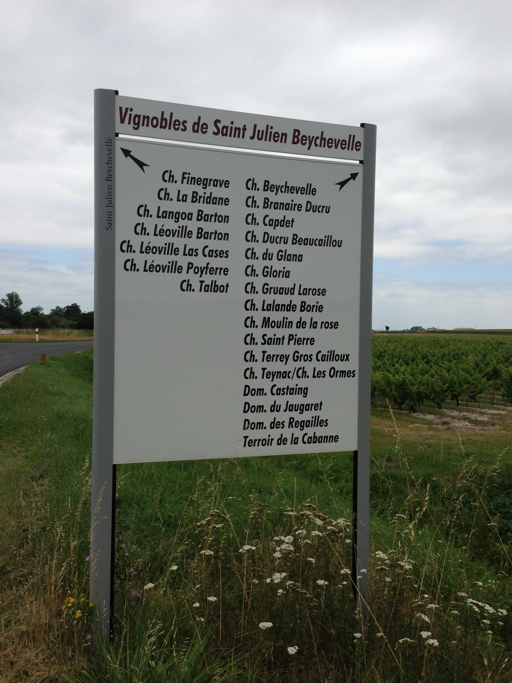 We continued through the village of Beychevelle. It seemed that the entire village was devoted to wine production: one side of the street was lined storage with buildings for the casks; the other lined with vines.

Further along, we approached the village of Saint Julien de Beychevelle, noting that nearly every village we had driven through had a cathedral.

Just after crossing into the Pauillac appellation, we came upon two châteaux facing one another from opposite sides of the street, the Châteaux Pichon Longueville, with its refecting pool…

…and the Ch. Pichon Longueville Comtesse de Lalande, designed by the same architect in the 1850s.

Something else we saw all through the region were these huge, roadside crucifixes; I must have counted a dozen or more. It is, after all, a Catholic country.

We stopped at the Châteaux Mouton Rothschild to find that it allows entry by appointment only, which must be obtained in writing weeks in advance. Informed, we didn’t even bother to try to get into the other nose-in-the-air châteaux, Ch. Lafite-Rothschild, though we did stop for a photo from the road.

Up the hill from the Rothschilds we passed into the Saint-Estéphe appellation as we approached the imposing Châteaux Cos d’Estournel and its solitary turret. 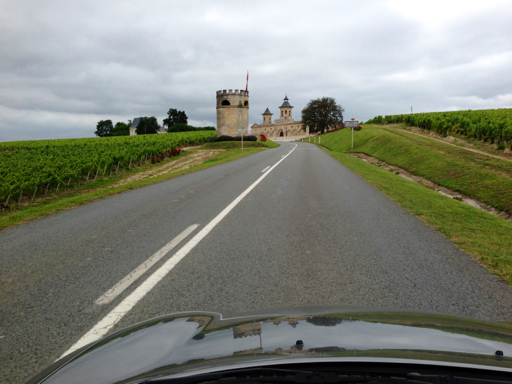 This one was pretty impressive, but, again, no tours, so on we went.

By now, like us, you’re probably getting tired of seeing old mansions. One more to go, Châteaux Pomys, where we stopped for a tasting, but didn’t like the wine and moved on, after pondering whether to have dinner at the restaurant there.

Frankly, we don’t drink wine that much any more and by now we were more interested in getting dinner or coffee.

One last thing. We were intrigued by the tractors they use in the vineyards, like something out of Star Wars!

We met a couple of these head-on on the farm roads. I wasn’t going to play chicken with them.