We decided to make Friday a beach day at nearby Le Gurp Plage, just a couple minute drive from the house in Grayan. It was a nice, warm, sunny day, reminding us how lucky we are in South Florida to have weather like this all year long.

Down at the beach, we walked south, away from the bulk of the sunbathers, toward the bunkers we had seen from the top of dunes (up there at the base of the yellow flag) on our first day in France. 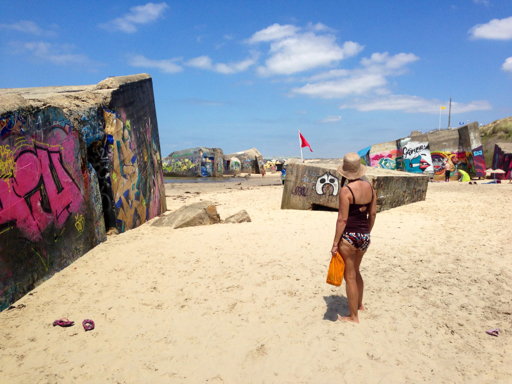 In 1942, fearing Allied invasion from Great Britain, the German Army had begun construction of the “Atlantic Wall” – coastal fortifications intended to extend all the way from Norway to Spain. The construction continued into 1945, but was never completed, nor did it stop the invasion that came on D-Day, June 4, 1944, that paved the way to the Allied victory and the end of World War II in May 1945.

Here along the Bay of Biscay, the defenses were similar to, though less massive than, what we had seen in Normandy a couple years ago. Here, the bunkers probably housed machine guns and small artillery, whereas, in Normandy, there were many that were built to hold large gun batteries.

But, whereas the bunkers and pillboxes in Normandy had been preserved, seemingly, as a memorial to the invasion there, here along the southern coast of France, these abandoned structures have been left to fall into the sea.

And, they’ve been turned into canvases for aspiring graffiti artists to make their mark with what I’m going to call “War Art,” or “Wart,” for short:

We explored in and around these partially submerged pillboxes and tested the water – too cold – I might have to abandon the idea of surfing here, though it’s an extremely popular sport all up and down the beach. 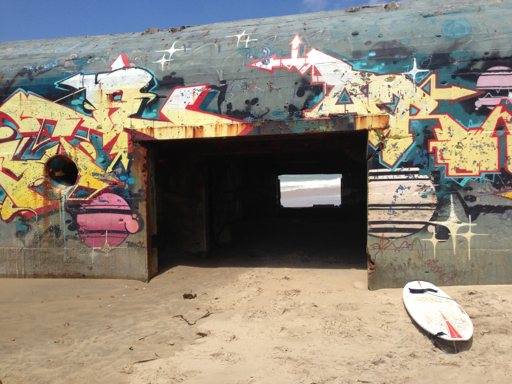 I think the French artists have found a much better use for these structures than the German builders ever intended.