The drive into the Pyrenees was very scenic, although it didn’t seem to be getting any cooler as we made our way up into the foothills; I guess we weren’t gaining enough elevation to make a difference.

We didn’t have any particular destination in mind and we even thought about crossing over into Spain, but as I drove, Dale scanned the guide book looking for a B&B or small hotel THAT HAD AIR CONDITIONING. She found a contender in Saint-Jean-Pied-de-Port, whose name means “Saint John at the foot of the mountain pass.”

As soon as we drove into town, crossing the Nive River, we knew this was the place for us.

We checked into the Hotel des Pyrenees on the “modern” main street, Route de Caro. The “old” road, built in the 12th century A.D., if not long before, was across the street from the hotel and up a short distance on the opposing hillside, paralleling the modern road. North of the river, the old road has long been known as Chemin de Saint-Jacques, the “Way of St. James;” south of the river, it’s the Rue d’Espagne, the “Road to Spain.” I’ll tell you more about the significance of those names in my next post.

Still enough sun for a dip in the pool. 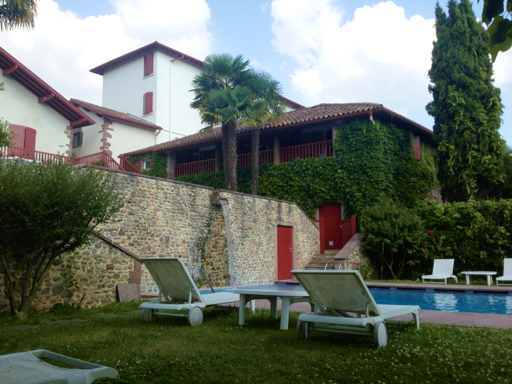