The Chemin de Saint-Jacques, the Way of St. James, is more famously known in this part of the world as the pilgrim’s road to Santiago de Compostela.

Since the 12th century A.D., catholic worshipers from throughout Europe have walked south to Saint-Jean-Pied-de-Port (which lies at the foot of the Roncevaux mountain pass) in order to cross the Pyrenees on their way to see the relics and tomb of Saint James the Apostle, 500 miles away in Spain at the cathedral in Compostela where his body is supposedly buried.

The pilgrimage continues to this day; the hikers filling the little village. For the most part, they enter Saint-Jean-Pied-de-Port through this city gate, the Porte Saint-Jacques (which we visited not long after we arrived Thursday evening):

The old road is lined today with hostels for the hikers, much like it was lined with inns during medieval times. 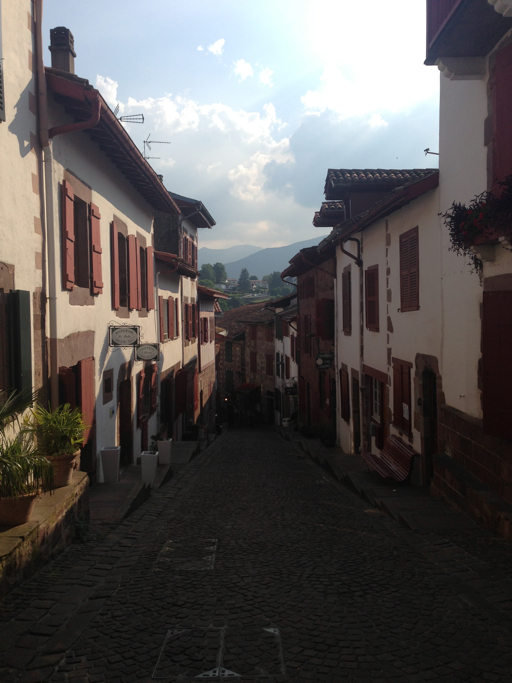 Then, as now, the returning pilgrims carried scallop shells, taken from the shoreline in Compostela, as proof they had made the journey. This Coquille St. Jacque (my guess) symbol is found all along the route; you can see it on the yellow and blue sign by the door of this hostel – special rates for pilgrims.

The buildings along the old road were ancient,…

…in addition to being picturesque and romantic.

We passed through the opposite city gate, the Porte Notre-Dame with its clock tower.

On the return to the hotel, we admired the beret on this local Basque; it reminded us of our recent visit to Chile:

The Basque people have a unique culture with a Spanish flair: they like bullfights and jai-alai (they call it pelota here); in fact, there is a jai-alai fronton here in Saint-Jean-Pied-de-Port, visible from the city gate, Porte Saint-Jacque. That’s it in the center of this photo, taken from the Porte:

And the Basque language, we’re told, is also unique – neither like French nor Spanish (the Basque people call their language “Euskaldunak”). Take a look at this sign in French and Euskaldunak, I mean, Basque.

We checked out of the hotel and left Saint-Jean-Pied-de-Port around noon.

Just out of town, I took this “still life with designer Coke can” on the dash of the MG that summed up my feelings about the local language. 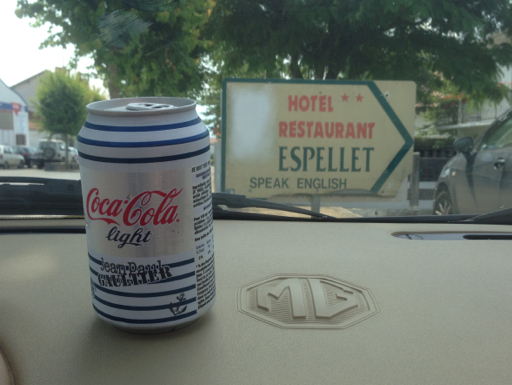