So far in Paris, we’ve been using the subway or walking, but yesterday we decided to try taking the tram and the train to visit the Musée d’Orsay which sits, appropriately, on the Left Bank (in French, the “Rive Gauche”) of the Seine River, the haunt of many of the great bohemian artists, writers and philosophers of Paris from years past. 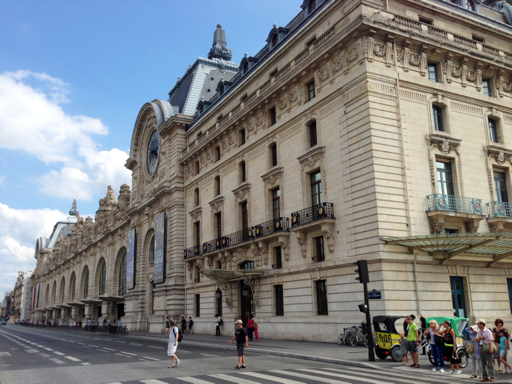 To our dismay, there was construction on the RER track along the Seine, so we had to get off the train at the Invalides station and take a bus that dropped us off a little distant from the museum.

Fortunately, Frédérique and Virginie, our exchange hosts, had obtained guest passes to the museum for us (several museums, in fact), so we were able to bypass the line to get in which allowed us to just make it in time for the guided tour of the museum in English.

The Musée d’Orsay is one of the newest (if not the newest) museums in Paris. We’ve been here before because it houses the greatest collection of Impressionist paintings in the world, our favorites.

The building was constructed as a train station for the 1900 World Expo in Paris. The trains were electric, so there was no soot from the locomotives to destroy the interior of the station, allowing a 370-room hotel to also be constructed as an adjunct. In 1939, the train station ceased operations and in 1973, the hotel closed. There was talk of demolition, but, instead, the French government purchased the property and renovated the station and hotel, creating the museum which opened in 1986 as the Musée d’Orsay.

Here’s a view of the interior: 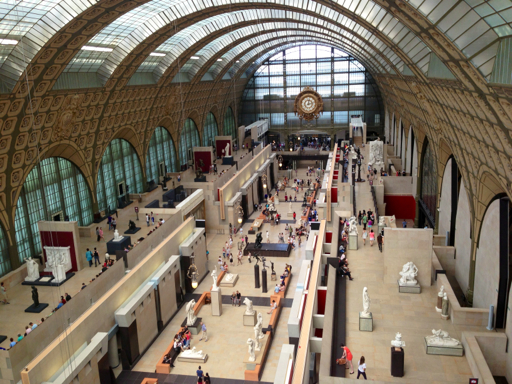 In addition to the Impressionist collection, the Orsay also has many paintings and sculptures displaying the more formalized academic works of the French Art Academy, against whom a group of young artists rebelled, starting in the 1860s. By 1874, several of these artists (Monet, Renoir, Degas, Cézanne, Sisley, Pissarro and Morisot) set up their own art show in competition with the established Academy show.

Supposedly, an art critic of the day derisively said that since these upstarts had set out to impress, “there must be an impression in there.” The quip stuck and the new style of these painters had a name. Over the next 12 years, they held 7 more shows before going their separate ways.

This painting by Henri Fantin-Latour, A Studio at Batignolles (1870), depicts the group’s inspirational father, Édouard Manet, seated at the easel, as well as two of its members: Auguste Renoir to Manet’s right (head within the frame); and, Claude Monet, on the far right edge. 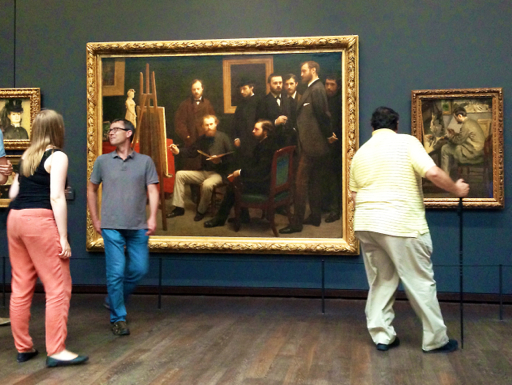 The Impressionists’ style was often light and airy – in fact, all but Degas painted en plein air, that is, outdoors in real time and real life. They preferred to paint their subjective impressions of scenes from modern life, to capture the moment, so their brushstrokes were rapid and visible, the subjects sometimes off center or out of perspective. They rebelled against the formalized studio painting criteria of the Academy (realism; flawless human forms; no visible brush strokes; proper perspective; mythical or religious subjects) that had to be followed in order to gain entry to the Academy’s shows – a necessity if an artist wanted to sell his work.

This painting by Cabanel, The Birth of Venus (1863), is an example of what the Impressionists rejected: 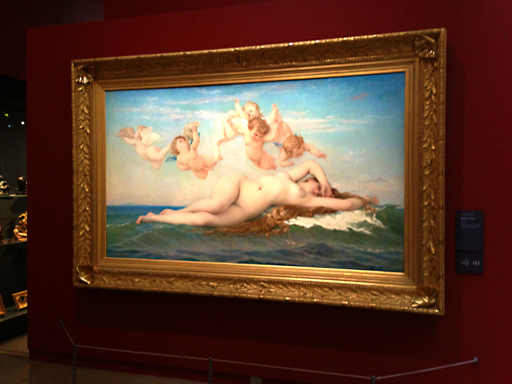 Instead, they created works like this painting by Édouard Manet, The Picnic (1862), which was reviled and ridiculed at the time: 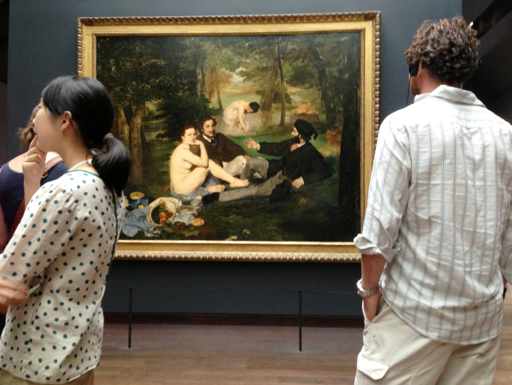 There were so many great paintings by these artists and their followers, including, in addition to those I’ve already listed, the Neo-Impressionists, Seurat, Signac and Cross, and the Post-Impressionists (Dale’s favorites), Van Gogh and Gauguin, that it was almost overwhelming. I think that for this family, it was that, exactly: 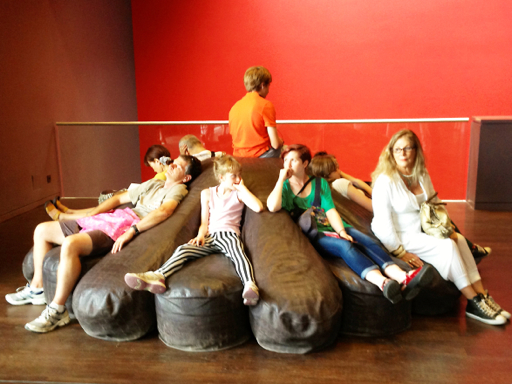 We finished the tour behind the clock on the upper floor which gave us a nice view over the Seine of Tuileries Garden,… 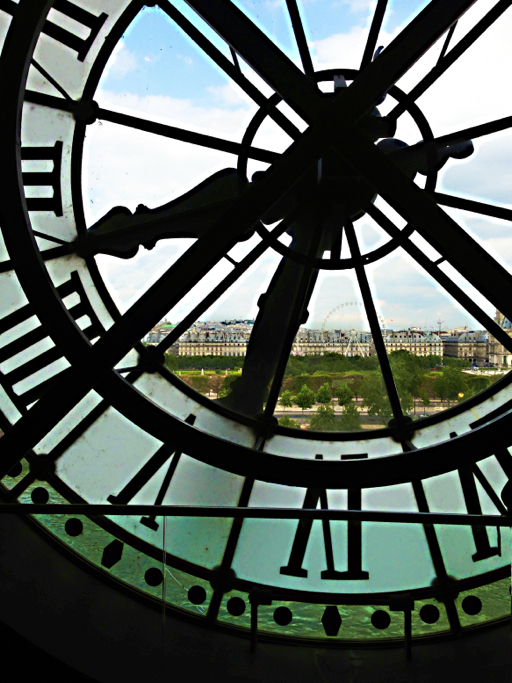 …then we had lunch in the cafe in the old hotel part of the museum before exploring the exhibits on our own for a couple hours. Around closing time, we took the #12 metro from the National Assembly station back to the apartment to recuperate before dinner.