We’re off on another home exchange, this time to the Pacific Northwest, specifically, Seattle in Washington State. And though we’ve just flown the furthest distance possible between two major continental United States airports, Miami International and Seattle-Tacoma, the flight wasn’t bad, stopping midway at Dallas-Fort Worth for a plane and airline change. 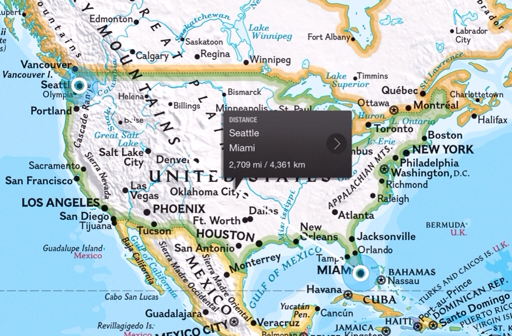 Our home exchange hosts, Rich and Susan, graciously offered to pick us up at the airport and we immediately had the feeling we were visiting old friends. Rich drove us north through downtown Seattle to their home in Ballard, a perfect location for exploring the region. We have an ambitious itinerary and we’re on a secret mission to see whether this might be a good location to have a second home. 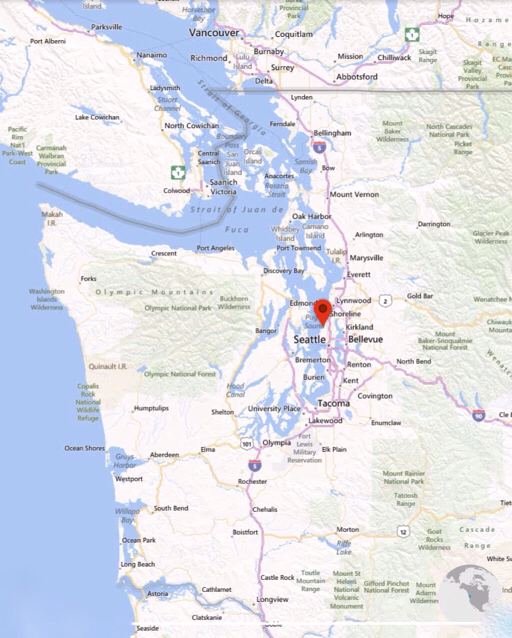 Rich and Susan have a magnificent home that they built in 2002 on family land overlooking Puget Sound. In fact, their home was featured in Northwest Home & Garden magazine for its elegance and innovative style. In a subsequent post, I’ll show you the exterior.

After getting a tour of the house, settling in and wishing Rich and Susan a good trip to our home in the Keys, we – not wanting to be Sleepless in Seattle – called it a night.

The next morning, Wednesday, we woke early (still on Eastern Standard time), made coffee, and planned our day while enjoying the view from the living room. 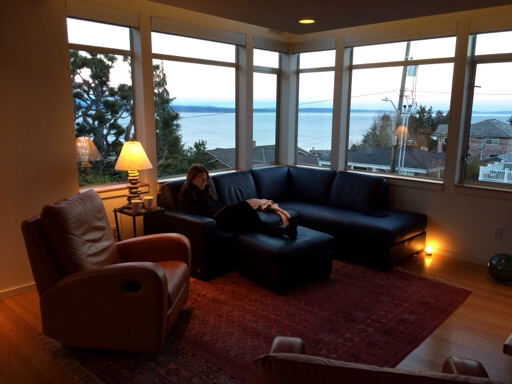 Here’s a quick tour of the house. I’ll skip the garage and guest bedroom on the ground floor and go straight up to the main living area, a great room with its entire western exposure open to the view, the northern end for lounging about, the middle for dining… 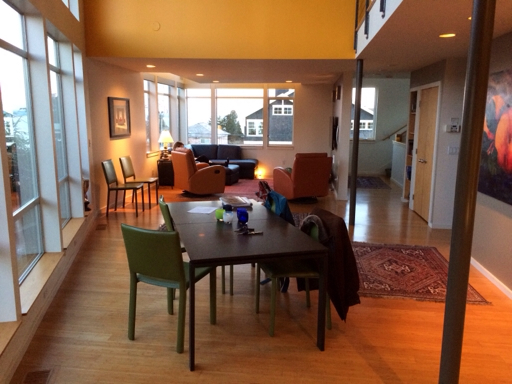 …and the wonderful, chef’s delight kitchen. 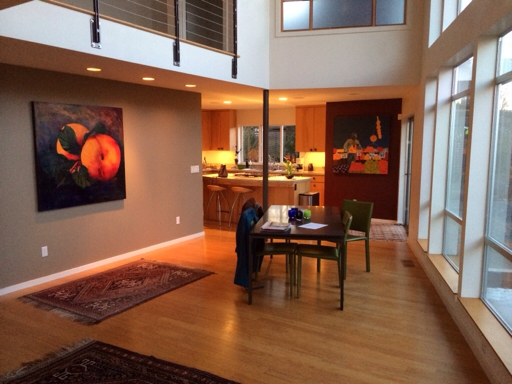 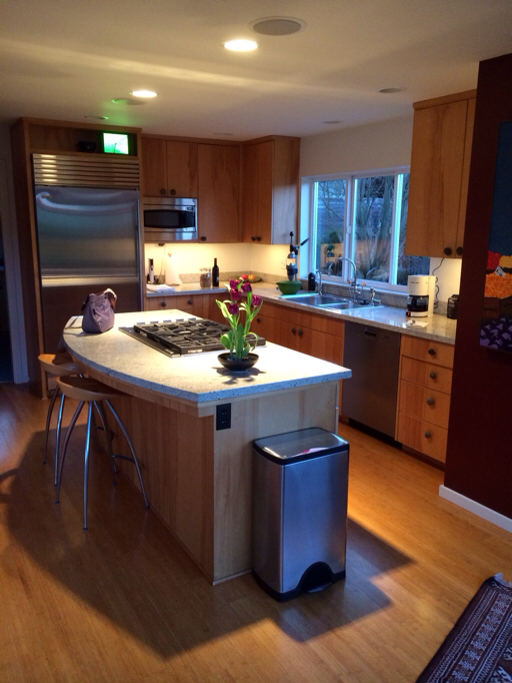 Up the stairs to the second floor… 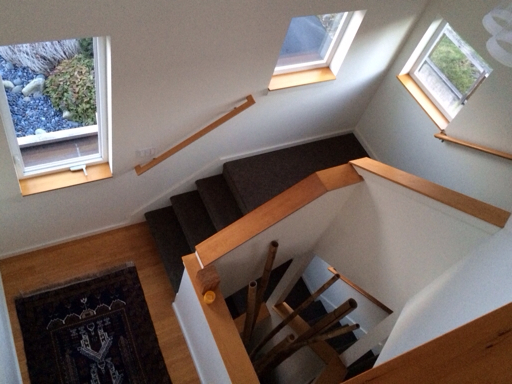 …where, from Susan’s sewing room, there’s a fantastic view of the Olympic Mountains across Puget Sound. 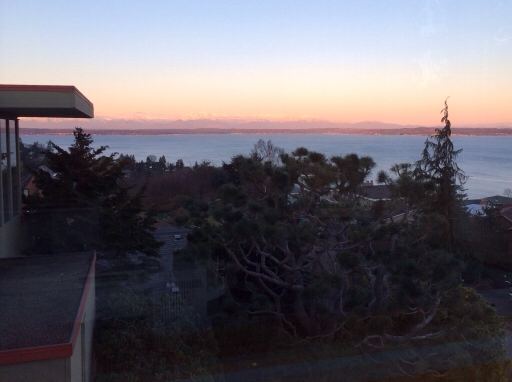 Then, across a walkway to the master bedroom… 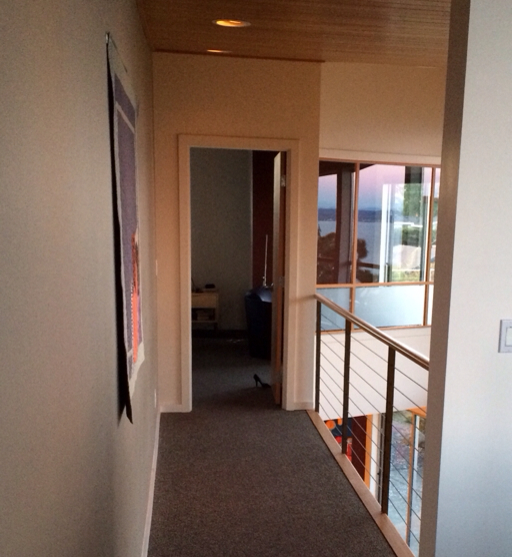 …that has a comfortable sitting area and a balcony, also with a great view. 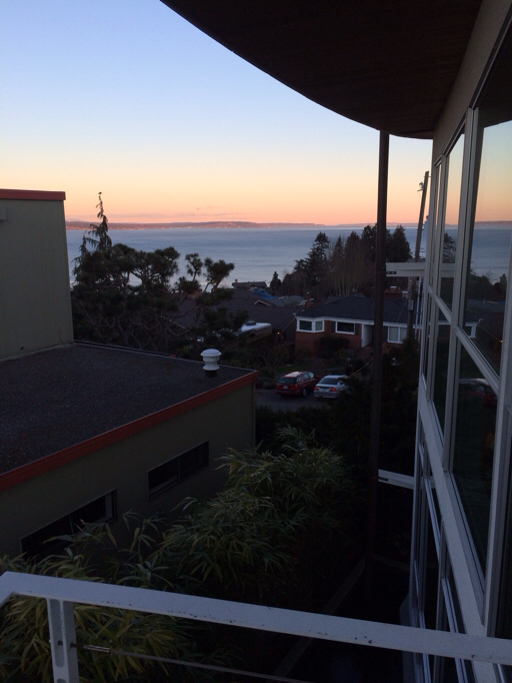 From the bedroom, there is access up a “ship’s ladder” to an observatory that overlooks the inverted parabolic roof. 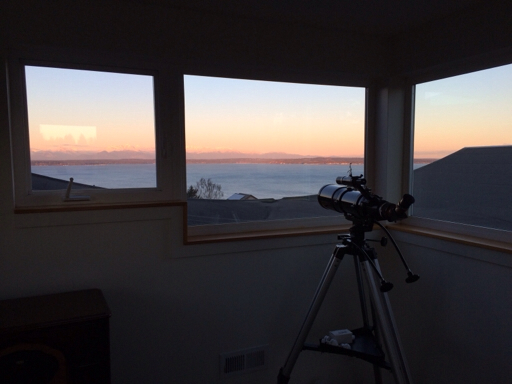 The exterior and garden are just as interesting and attractive as the interior of the house, but I’ll have to show you those views when I have better light. So, for now, I’ll leave you with a hint of the beauty of the outdoors here; a watercolor artist’s delight. 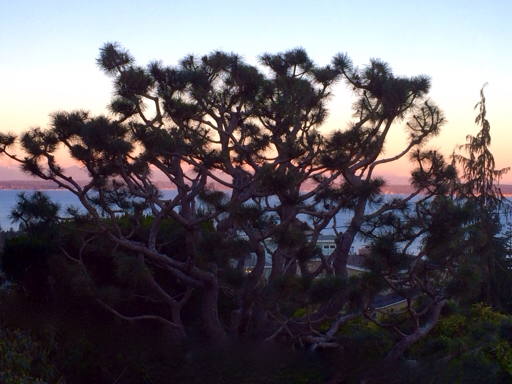 One thought on “Sleeping in Seattle”