We arrived in Brno, the second largest city in the Czech Republic by both area and population (pop. 400,000), early Sunday afternoon. Brno is a college town, but it has a reputation as being pretty sedate, which was fine with us. It was certainly quiet when we arrived.

From the train station, we walked the half mile up Masaryskova street to Hotel Pegas, our home for the next two nights. Our room was three floors above the pub on the ground floor that brewed its own pretty good beer.

Just a short way from our hotel is Freedom Square (Náměstí Svobody) which is the northern terminus of Masaryskova street. 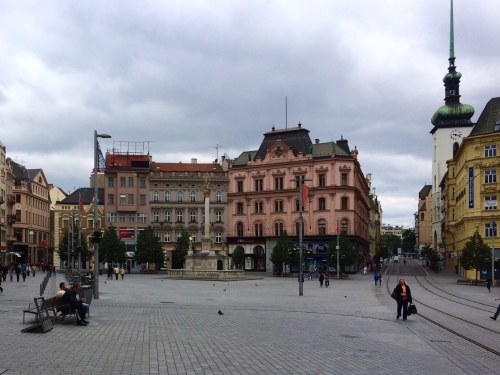 We loved the old buildings and the huge expansive square. Not far away is another square known as the Vegetable Market (Zelný trh) which is situated in the middle of the historical city center, established in the 13th century.

We walked across the Market square where I turned around and took this picture from the other side. 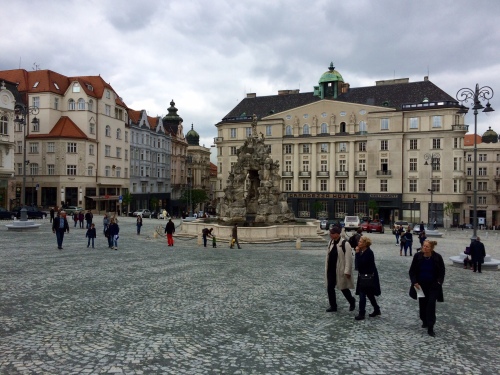 We toodled around town a little longer, then decided to head back to Freedom Square for a coffee. The building behind the outdoor cafe we stopped at is held up by giants!

Just north of Freedom Square, in front of St. Thomas church, is a bronze cast of Brno as it appeared in 1645 near the end of the Thirty Years War when it was a walled city, protected by the Špilberk Castle which sat on the hill above the town. At that time, the Cathedral of Saints Peter and Paul did not have its twin spire (it's the large building in the lower left, below). The large open area is the Vegetable Market and the triangular open area above that is Freedom Square. 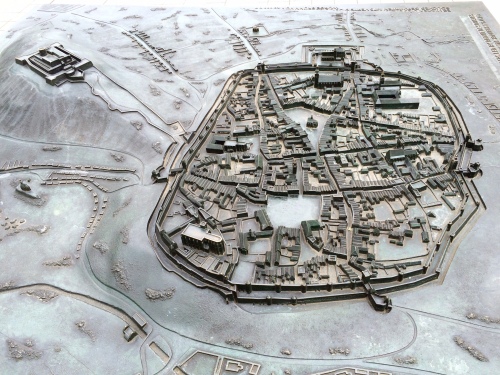 Špilberk Castle was founded in the middle of 13th century. It successfully withstood a 3-month siege by Swedish Protestant forces in 1645 during the Thirty Years War, meaning that Brno and Moravia remained predominantly Roman Catholic and under the Habsburg's rule. Thereafter, Špilberk was converted into a prison and, later, a military barracks.

Following the Anschluss in early 1938 by which Hitler annexed Austria into the Third Reich, there was an effort by Germany to do the same to the western parts of Czechoslavakia known as the Sudetenland – Moravia and Bohemia – which was already largely populated by Germans. In an effort to placate Hitler, Britain and France entered into a settlement with Germany known as the Munich Agreement that permitted Germany to annex and occupy the Sudetenland. Consequently, Špilberk Castle became a barracks for the German Army which carried out further modifications.

This would probably be a good place for me to mention that WWII was not kind to the good people of Brno. Besides being bombed by the Allies in 1944 and 1945, resulting in 1,200 civilian deaths and the destruction of 1,278 buildings, nearly 1,000 Brno Jews were transported and died in Nazi concentration camps. Then, at the conclusion of the war in 1945, the Russians occupied Brno and expelled all 27,000 ethnic Germans from the city in a forced march to the Austrian border, 1,700 of them dying along the way.

Today, the castle sits in a park-like setting on a hill overlooking the city. We hiked up to the top where I took this photo. Of course, the fortifications are mostly gone now.

But the castle still has a commanding view of the Brno.

The only other structure elevated above the rest of the city is the Cathedral of Saints Peter and Paul on the top of Petrov Hill. 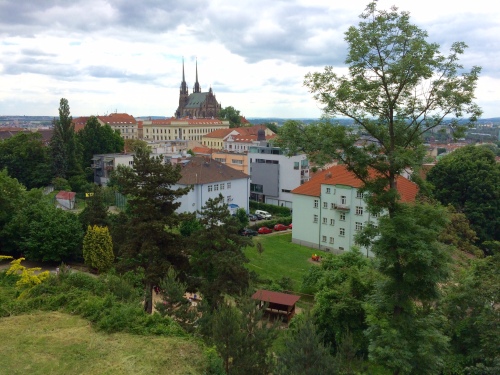 The Cathedral of Saints Peter and Paul was built in the Gothic style in the 14th century on the site of a former basilica. It was severely damaged by the invading Swedes during the Thirty Years War, but was rebuilt in stages over the next century. Surprisingly, the twin spires weren't added until 1909, although the whole structure looks ancient to me. 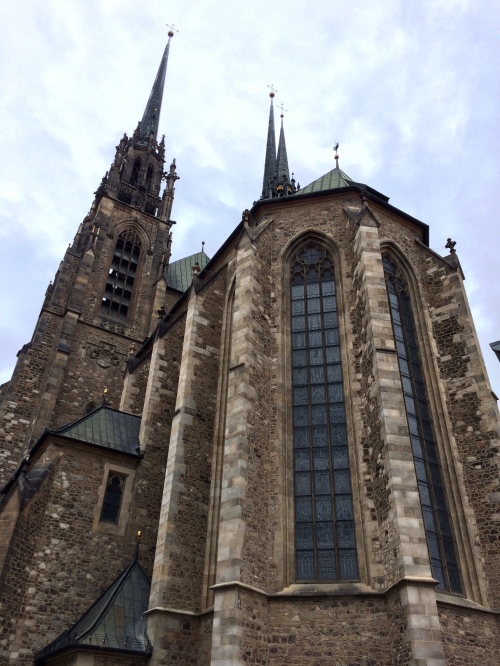 Brno has a UNESCO World Heritage site known as the Villa Tugendhat that we were determined to see before we left, so we walked all the way across town, passing this unique fountain along the way (it is programmed to draw and write with water).

Dale recently read the best-selling novel, “The Glass Room,” which was inspired by the story of Villa Tugendhat, its architect and owners.

According to Wikipedia, Villa Tugendhat:

… is one of the pioneering prototypes of modern architecture in Europe, and was designed by the German architect Ludwig Mies van der Rohe. Built of reinforced concrete between 1928 and 1930 for Fritz Tugendhat and his wife Greta, the villa soon became an icon of modernism.

Unfortunately for us, a Czech movie crew had monopolized the grounds for filming and Villa Tugendhat was closed to the public. That's the front of the house, behind the film production vehicles. 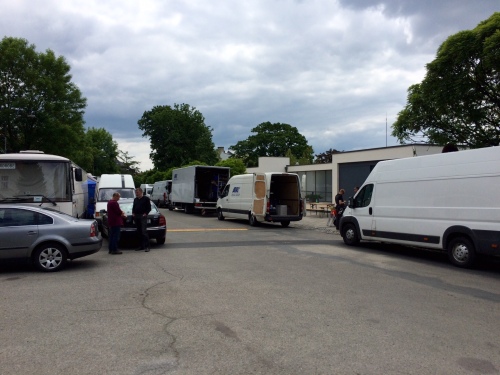 We asked if they needed an English-speaking extras for the film, but they said no. Oh, well, back to the hotel to pack for Prague.