We arrived in Prague (Praha in Czech) in the mid-afternoon and once again decided to walk to our accomodations, the approriately named Old Prague Hotel.

Prague is to Bohemia what Brno is to Moravia, the capital of its respective, ancient kingdom. The only difference is that Prague continues to be the capital of the Czech Republic.

I grew up knowing this country as Czechoslovakia, a nation-state created at the end of WWI as a result of the breakup of the Austro-Hungarian Empire, comprised of the former Habsburg lands of Bohemia, Moravia and Slovakia.

Czechoslovakia existed from 1918 until 1993, with an interregnum when it was occupied by Germany from 1938 until the end of WWII in 1945, at which time it was “liberated” and occupied by the Soviet Union. Following the end of the war, Soviet dominated Czechoslovakia became a member of the Warsaw Pact until the U.S.S.R.’s collapse in 1989. In 1993, Slovakia peacably dissolved its bonds with Bohemia and Moravia, who formed the Czech Republic, to become separate countries.

So, after having been dominated and occupied by the Austrians, the Germans and the Russians in succession, it’s a miracle that the Czechs agreed to again let go any of their sovereignty by joining the European Union, which they did in 2004. They did not, however, join the eurozone and continue to have their own currency, the koruna, as a result.

Whew. So, the moral of the story is: there is no country called “Czechoslovakia” anymore; in fact, it’s been over 20 years since that country existed. It’s the “Czech Republic” now. And don’t you forget it (especially if you happen to be in Prague).

After getting checked into our hotel and having dinner at an outdoor cafe, we decided to walk around town as twilight set in. Unintentionally, we ended up walking from tower to tower around and into the Old City.

Here’s the first one, the Saint Henry Tower (Jindřišská věž), the detached bell tower of the Church of Saint Henry, built in 1472-1475. It was still open to the public when we visited, but the main attraction in the tower these days is a “Whisky Bar” with a view. Pass. 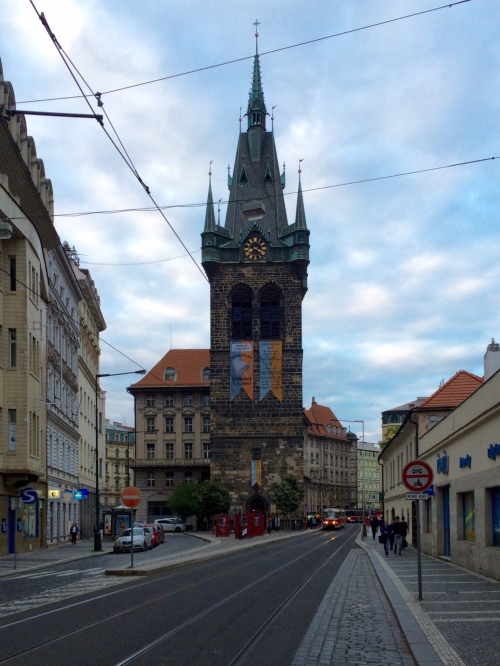 We continued wandering and next came upon the Powder Tower (Prašná brána) one of the 13 original city gates to the ancient city of Prague, that is, a real watchtower. It was used to store gunpowder in the 17th century, hence the name. Since this tower was part of the ancient city wall it also is the separation between “Old Town Prague” and “New Town Prague,” though it all looked pretty ancient to me.

We walked through the Powder Tower and entered Old Town Prague.

Although Prague is a huge city – the largest in the Czech Republic, with a population of 1,240,000 – Old Town Prague still has the feel of a medieval town with winding, narrow alleys, large public squares and ancient, beautiful buildings.

Eventually, we found ourselves walking past the Old Town Hall (the building on the left in the photo, below) and entering the Old Town Square (Staroměstské náměstí).

Across the square you can see the twin towers of the Church of our Lady Before Týn (Kostel Matky Boží před Týnem), built in the 14th century.

The tomb of Tycho Brahe is in the Týn Church (photo, below). Tycho Brahe was the imperial astronomer for Christian IV, King of Denmark. We visited his observatory, the Round Tower, when we were in Copenhagen two years ago. I wrote about it here.

In 1597, Brahe was invited to Prague to become the official imperial astronomer for the Bohemian King and Holy Roman Emperor, Rudolph II (a Habsburg, of course). He built a new observatory in nearby Benátky nad Jizerou and worked there, assisted by Johannes Kepler, until his death in 1601. Kepler used the data they collected to develop his Three Laws of Planetary Motion which describes how the planets orbit around the sun.

I’m prattling on about Tycho Brahe because the guy fascinates me. When he was 20, he lost part of his nose in a sword duel as the result of a disagreement at a wedding over a mathematical formula! Really!

So, he made himself an artificial nose and became interested in alchemy while studying which metal to use for his fake nose. It seems that he led people to believe his nose was made of gold, though some said it was lead. Wait, wait, it gets better.

Tycho Brahe died at the age of 65 of a burst bladder. Turns out he was at a banquet and had been drinking a bit and really had to pee, but felt it would be bad manners to leave the table. He had written his own epitaph: “He lived like a sage and died like a fool.” Spot on.

Soon, rumors began to fly that he had been murdered: either by Kepler for his fame and observatory; or on behalf of Christian IV who believed that Brahe had had an affair with his mother. Then another theory: he died of lead poison from his lead – not gold – nose.

So, in 2010, Danish scientists sought permission to exhume Tycho’s body from the Týn Church here in Prague to perform an autopsy of sorts. Together with Czech scientists, the group concluded that his nose had been made of bronze, not gold or lead, and that he had, in fact, died of a burst bladder, not from poisoning. Wow, you can’t make this stuff up.

We continued our walk around the square where I took this photo of the Old Town Hall clock tower (more on that in a subsequent post), with a statue of Jan Hus in the foreground. Huss’ story is quite complex, so I’m going to skip it for now; suffice to say that he was a protestant reformer over a century before Martin Luther. I had the impression that Hus was looking up at the clock tower on the town hall to see if his time was up. It was; he was burned at the stake. 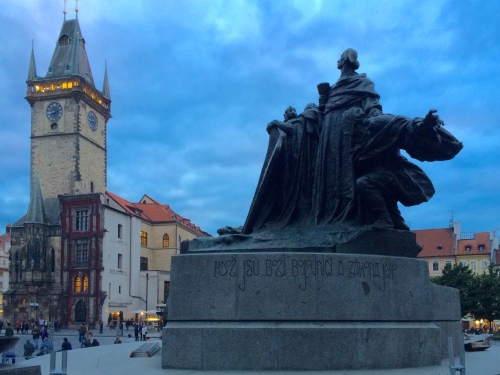 By now it was almost 9:00 and starting to get dark. The buildings were all being lit up and it was beautiful, but the nightlife seekers were beginning to stream in and we had already had a long day, so we decided to head on back to our hotel, passing the Old Town Hall on our right on the way out.

There must be some kind of way out of here. And the wind began to howl (Jimi would have understood).

One thought on “All Along the Watchtower”