We’re about to begin our Scandanavian/Baltic adventure. As I write this, we are sitting in the airport in Las Vegas, having left our home in Bellingham, Washington, 7 1/2 hours ago, yet being no closer to Stockholm, Sweden, than when we left this morning.

Why, you might ask, have we traveled so long to merely go sideways? Answer: direct flight, Las Vegas to Stockholm, for $248 on Norwegian Air.

It was a beautiful morning to fly. Here’s a photo I took just after take-off of Lummi Island which sits just offshore of Bellingham in Puget Sound.

Lummi Island is accessible from Bellingham via a short ferry ride and we visited it last year for the annual artists’ studio tour. It’s so close that some people (like the City building inspector for our house construction) live there and commute to Bellingham for work.

In the background behind Lummi Island is Orcas Island, one of the picturesque San Juan Islands and one that we plan to visit when we return. There are over 400 islands in the San Juan archipeligo, a fertile cruising ground filled with small coves for gunkholing. No wonder the Pacific Northwest is known as a boater’s wonderland. 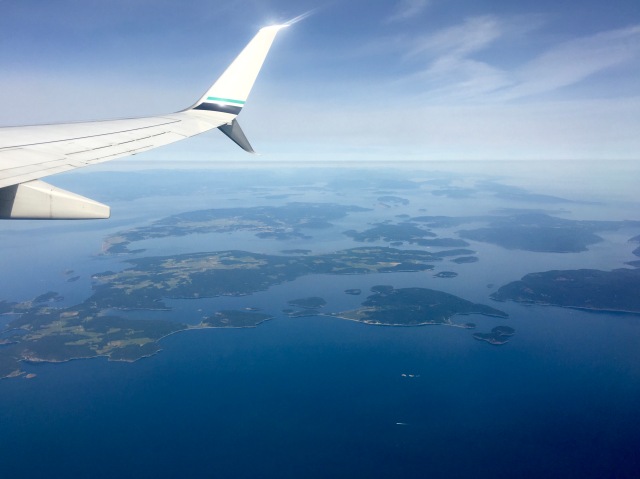 In the far distance in the photo above is Victoria, British Columbia, which is actually on a more southerly latitude than Bellingham. Imagine – we live NORTH of part of Canada!

Just 15 minutes after flying over the San Juan Islands, we passed Seattle with a beautiful view of the Olympic Peninsula and the snow-capped Olympic Mountains.

And then, approaching the Washington/Oregon border, Mount Adams, not far from the infamous Mount Saint Helens, the volcano that erupted in 1980.

Flaps down two hours later, we descended into Las Vegas. Look at how brown the place is – and it hit 100° shortly after we landed. I don’t know why anybody would want to live here. Fortunately, the terminal is air conditioned – it would have to be.

2 thoughts on “One Step Forward, Two Steps Back”