Following our visit to the Royal Palace – and taking advantage of the fact that most of the crowds were on the other side of the building, awaiting the arrival of the King – we took another look around Gamla stan, the Old City. The streets were much less crowded this time, as you can see.

We stopped for coffee…

… on the square in front of the Börshuset, the original Swedish Stock Exchange, which is now the home of the Swedish Nobel Museum (as in Nobel Prize); that’s it on the left: 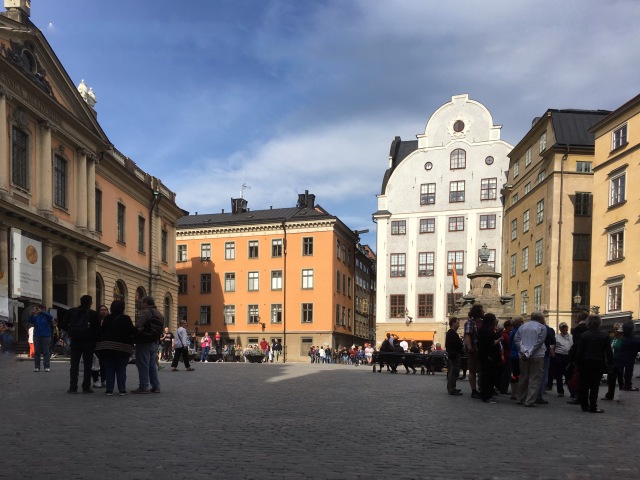 After finishing our coffees and admiring the old architecture of Gamla stan,

We took the tour of the Nobel Museum in order to compare it to the Nobel Peace Prize Museum in Oslo, Norway, that we visited when we were there a couple years ago. There are two museums because Alfred Nobel’s will (which created the trust for the prizes) directed that the Nobel Peace Prize was to be awarded by and in Norway, whereas all the other Nobel Prizes were to be awarded by and in Sweden. Nobody in either museum can explain why Nobel set things up this way, but it allows each country to lay claim to Nobel’s noblesse oblige. There’s a relief of the old dynamite inventor on the floor of the museum here in Stockholm:

Here’s the inside of the Swedish Nobel Museum; that conveyor system on the ceiling has a card for each Nobel Prize winner and his or her contribution – there are nearly 900 of them:

It was nice to be out of the crowds for the day.