I’ve called this post “Osloinaday” to give you a feel for the whirlwind walking tour we made of the city after getting off the ship at 10:00 a.m. on Thursday. You could say “Oslo in a day,” if you were taking your time; but, then, you could also take a week to do what we did in a day.

After disembarking from the ship, we walked along the harbor to the Akershus Fortress, built in the 1300s and rebuilt and modified by my favorite king, Christian IV, in the 1640s. In the olden days, if invaders made it past Oscarsborg Fortress, they still had to contend with Akershus Fortress. 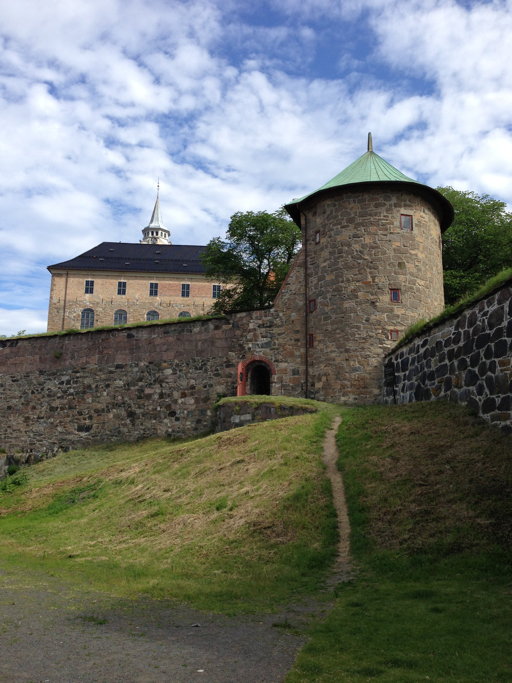 From Akershus, we continued along the waterfront, passing through Aker Brygge, the trendy waterfront promenade near the water-taxis, to our hotel.

Norway is notoriously expensive for Americans; in part, because Norway is just plain expensive; and, in part, because the Federal Reserve has done such a great job of destroying the value of the dollar abroad by lowering interest rates to zero so that there is no reason for foreigners to hold the currency as an investment.

On the ship, we purchased the “Oslo Pass” which gave us use of the city’s pubic transit system and admission into most of the city’s museums for 24 hours. At 270 NKr (about $45), the Oslo Pass has to be the best deal in all of Norway. I know we got our money’s worth out of it.

We dropped our backpacks at the Carlton Oslo Hotel Guldsmed – a terrific find and another great value – then returned through Aker Brygge to the Nobel Peace Center.

The Nobel Peace Center opened in 2005, but the Nobel Prizes have been given for Physics, Chemistry, Physiology or Medicine, Literature, and Peace since 1901. All of the Nobel Prizes are awarded in Sweden, with the exception of the Peace Prize which, by direction of Alfred Nobel who instituted and funded the Prizes, is awarded in Norway by a committee appointed by the Norwegian Parliament.

Our Oslo Pass got us into the Nobel Peace Center, just in time for an excellent guided tour. During the tour, we were struck by a couple ironies. The first is that the fortune that funds the Peace Prize was made by Alfred Nobel, the inventor of dynamite! Another, more current irony is that the 2012 Nobel Peace Prize was awarded to the European Union, although Norway is one of the only countries in Europe that has never applied for membership to the EU!

The Oslo City Hall is the most elaborate, over-the-top municipal government building I have ever seen. For example, here’s the dining hall:

Leaving the Rådhus, we walked up to the Oslo Theater, bumping into the Police Department’s Marching Band on the way. 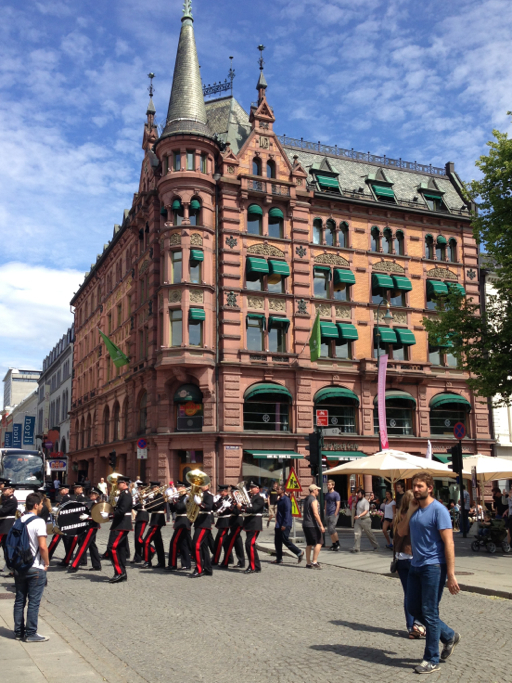 From there, we walked down Karl Johanns Gate, the main drag,…

…to the Stortinget, the Norwegian National Parliament Building.

The Stortinget is closed to visitors during the week, but we were able to walk up to the entry and take this picture of the Grand Hotel next door.

A little way behind the Stortinget is the Oslo Domkirke, the cathedral:

Oslo’s public transit includes water taxis, trolley cars, a subway, trains and buses. You can get anywhere you want with little delay. 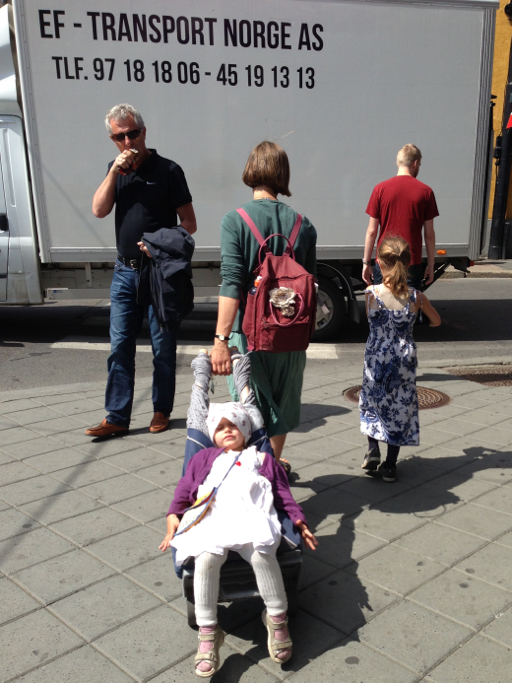 We stopped at the National Gallery to see the paintings of Norwegian artists and the museum’s Impressionist collection, but most of the Impressionist paintings were away somewhere else while the Gallery had a special exhibition, the 150th Anniversary of the birth of Edvard Munch, renowned as Norway’s greatest artist. 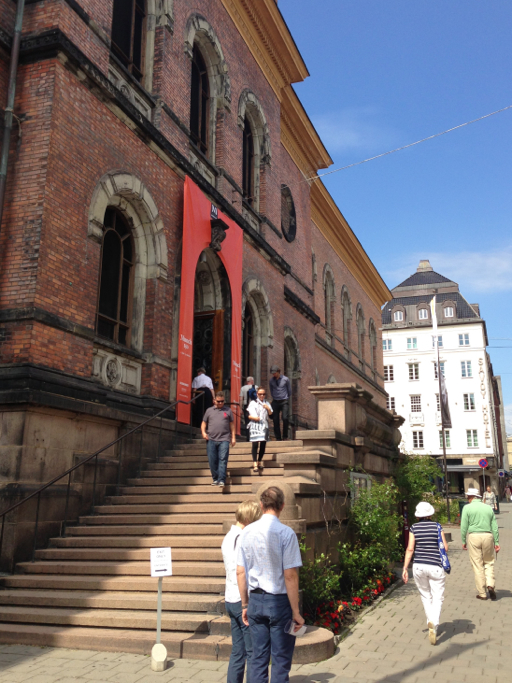 Munch is probably best known for The Scream, an eerie, melancholic work that exists in two media, pastel and oil. One of the pastels sold in 2012 for nearly $120,000,000 and both of the oil paintings have been stolen – and retrieved.

Whatever. I’m not a fan of The Scream. Nor do I care much for Munch’s other abstract works – they’re just too depressing and maudlin for my taste.

I had hoped to see the Impressionist paintings. Munch was impressed with the Impressionists (pardon the pun) and early in his career he developed a style that looks to me to be a cross between Gaugin and Van Gogh. Unfortunately for us, Munch’s earlier, more impressionistic pieces seem to be housed in the Munch Museum away from the city center. Here’s one that was on display in the National Gallery that I do really like, Summer Night’s Dream (The Voice) (1893):

After the National Gallery, we walked around the Royal Palace, but it was undergoing renovations, so there wasn’t much to see, other than this King’s Guard. 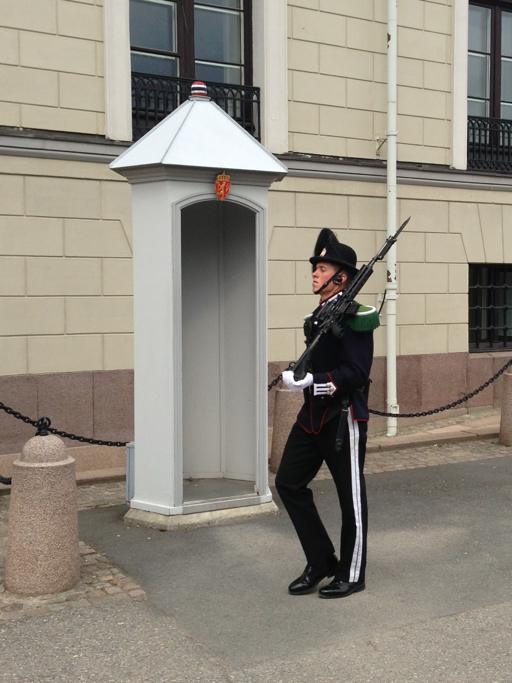 And just to show you that outside the city center, Oslo is becoming a very modern city, here are a couple pictures of newly developed… 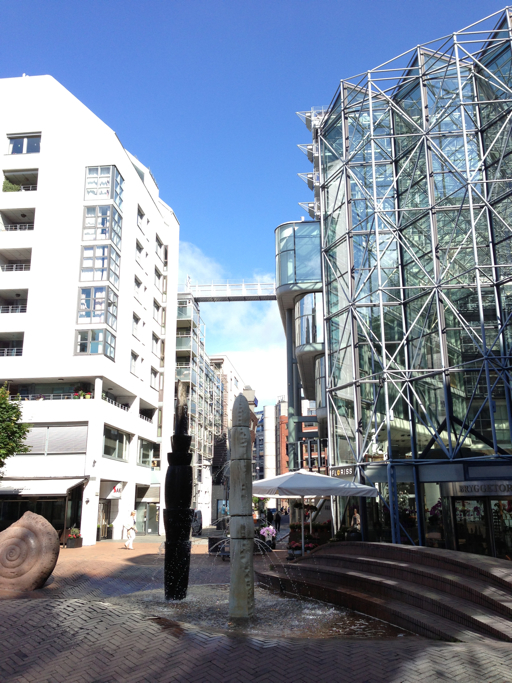 …and redeveloped parts of Oslo, this one is northeast of the Opera House: 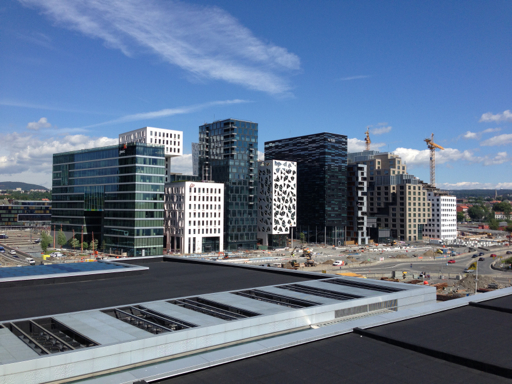 And even though the Norwegian economy is fueled (pardon the pun again) by North Sea oil, the Norwegians are environmentally conscious, as evidenced by the electric car charging stations that we saw scattered around town.

It was a breathless tour and we were back at the hotel by 6:00 p.m., in time for a steam bath and sauna before dinner and bed.