Thursday morning, we caught a water taxi to the Bygdøy Peninsula where there are several museums we wanted to visit: the Fram Museum; the Kon-Tiki Museum; and, the open-air Norwegian Museum of Cultural History (we didn’t have time for the Viking Ship Museum or the Norwegian Maritime Museum which are also on Bygdøy).

The Fram and Kon-Tiki Museums are dedicated to maritime adventurers; the Fram to Polar explorers and the Kon-Tiki to the ethnographer, Thor Heyerdahl.

Inside the Fram Museum is the sailing ship, Fram, that was used by the Norwegian explorer Fridtjof Nansen (and others) to explore the Arctic and by Roald Amundsen to explore the Antarctic between 1893 and 1912. The Fram supposedly has the record for furthest northern AND furthest southern voyages in a wooden ship!

As you can see, above, the Fram (sans upper rigging) is the centerpiece inside the museum. Take a look at the iron reinforcements attached to the bow and along the waterline to break through the ice. Inside, there was cross-bracing to keep the ship from being crushed when, as planned, it became trapped in the Arctic Ice Sheet.

Nansen’s purpose in his 1893 voyage (which lasted 3 years) was to intentionally lock the ship into the ice floe in order to track its drift, hoping that the drift would take him over the North Pole. It didn’t, so, with another shipmate, he got out and skied. Unfortunately, that didn’t work either, so Nansen and his companion turned around until, surviving on walrus and polar bear meat, they finally encountered some British explorers and ultimately made their way back to Norway at almost the same time as their shipmates sailed the Fram into port.

Amundsen’s voyage was just as crazy. In 1910, he was on his way north in the Fram, again hoping to be the first man to make it to the North Pole, only to find out while enroute that Admiral Robert Peary, an American explorer, claimed to have beat him to it. So what did Amundsen do? He changed course and sailed south to the Antarctic and became the first man to reach the SOUTH Pole, instead!

Unfortunately, we didn’t have enough time in the Fram Museum to read the many exhibits describing the trials and tribulations of these incredible adventurers; we had to get over to the Kon-Tiki Museum next door.

The Kon-Tiki Museum is dedicated to the exploits of Thor Heyerdahl and houses the Kon-Tiki and the Ra II. Heyerdahl was interested in proving that ancient civilizations were capable of transoceanic exploration. 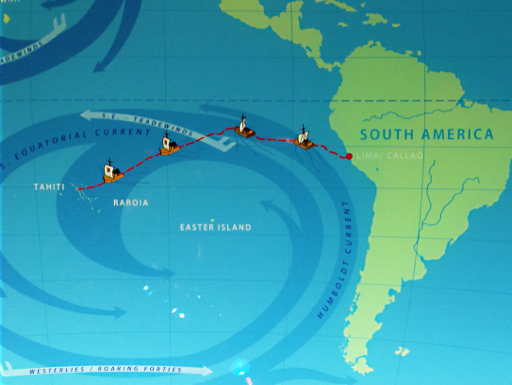 Heyerdahl was also convinced that the ancient Egyptians influenced the South American natives to build pyramids, so he set out to prove that papyrus reed boats could be sailed across the Atlantic Ocean. His first attempt, in the Ra, failed, but his second attempt, in Ra II, succeeded in 1970 when he landed in Barbados, having left from Morocco, nearly 3,800 miles distant.

I crossed the Atlantic Ocean on a 160-foot German-built, single-screw, canal boat, the “Knista,” in 1980. Like Heyerdahl’s crew, there were six of us on board; and we didn’t go much faster than he did, traveling at 6 knots, departing Travemünde, Germany, traversing the Kiel Canal and the English Channel, with stops in the Azores and Bermuda before making landfall in Fort Lauderdale, Florida, after 6 weeks at sea.

The wind in the middle of the ocean can really howl, and you wouldn’t believe how big the waves can get. We were in a gale for several days that would have torn the Kon-Tiki and the Ra II apart (in fact, Ra I did get torn apart during its failed voyage).