Leaving the Kon-Tiki Museum, we caught the public bus to the Norsk Folkemuseum, the open-air Norwegian Folk Museum, where several farmsteads have been carefully reassembled in geographical and chronological arrangement.

Unlike the rest of Europe, Norway never adopted feudalism; thus, farmers have always held absolute ownership of their lands, unlike countries such as England where, in those days, the King held title to all the land, with various lords and knights holding estates through the King and all serfs being mere tenant farmers.

Consequently, Norway, rather than developing with large estates and chartered towns, was a land dotted with independent farmsteads where several families would cluster around shared common farm buildings, owning their own homes and working their own lands.

Here’s an example, from a distance, of one of the farmsteads from the 1700s: 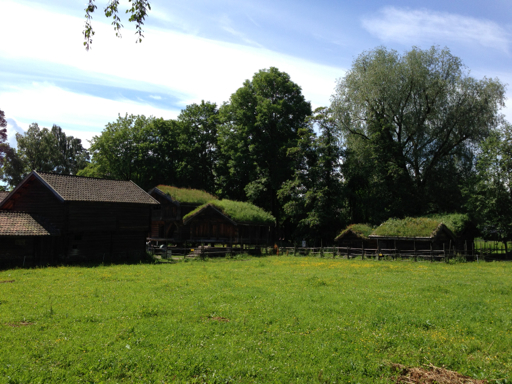 Nearly all of the dwellings and farm buildings were made entirely of wood, often pine. Two building styles developed, depending on the locale: the notched log cabin; and the stave building.

This loft, dating from around 1750, exhibits both styles: notched log on the bottom and staves on the top. 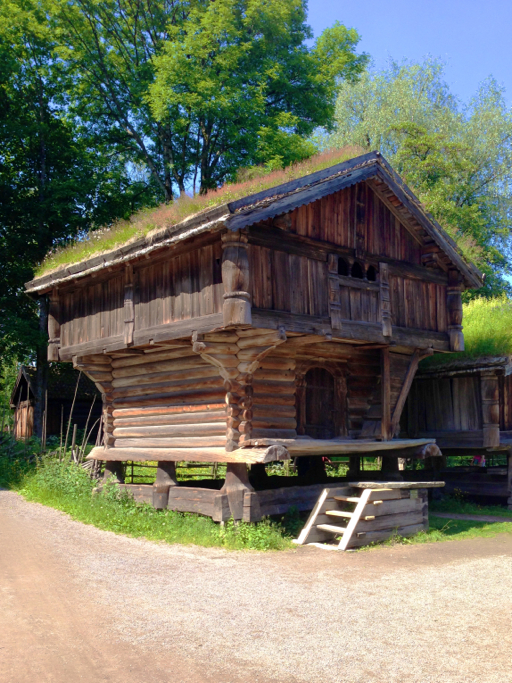 Norwegian farmers used the materials that were available to them and that meant wood for the structure, sod for the roof. Later, tile became popular and some farmers switched from sod, only to learn that the sod roof was a much better insulator. In Denmark, we had asked if sod roofs are watertight and were told they are and that they can last as long as 100 years!

They’ve been using sod for roofing here in Norway for a long, long time. You know what a log cabin looks like; here’s the Norwegian version, circa 1250 A.D. complete with sod roof:

Yep, that’s right, circa 1250 A.D.; this log cabin is supposedly the oldest wooden dwelling house in the world! They know this, not only by dating the wood, but also because there was a runic inscription above the door by the builder (“Torgaut Fivil made me”) in a type that has been traced to that time period.

Here’s the door; if you look closely at the log above the door, you might be able to make out the runic inscription: 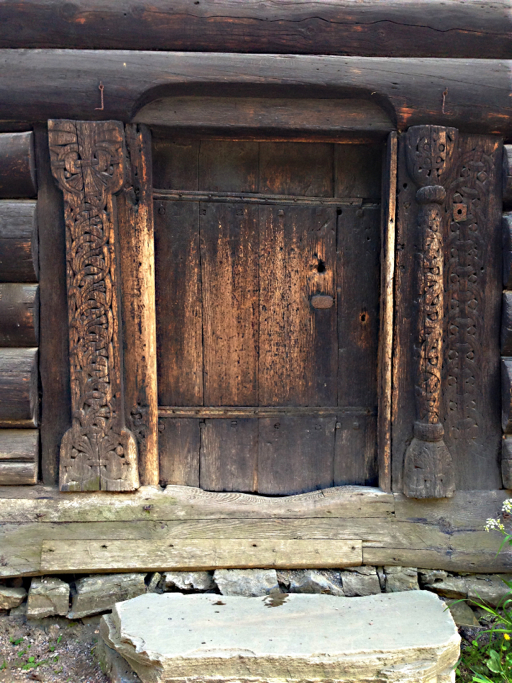 These two storage buildings from the Telemark region were some of the first buildings acquired by the museum and moved here, both built around 1750. The one of the left, which is of stave construction, also doubled as a guest cabin.

We don’t know why the Norwegians raised their homes and farm buildings on platforms or pilings. I couldn’t find an answer anywhere, including Wikipedia; but, there are three reasons we could think of: 1) to keep the entry door clear in heavy snow; 2) to prevent the integral structural components at the ground from rotting; and 3) so that the buildings could be moved (we actually saw a house about this size being moved on a horse-drawn cart, in Jamaica, years ago).

At any rate, the lower floor of the two-story buildings was typically used for storage with the upper floor being the living quarters.

The best example of a stave building is the stave church from Gol, built in the 11th Century A.D., though it was altered and renovated several times between 1600 and 1800. 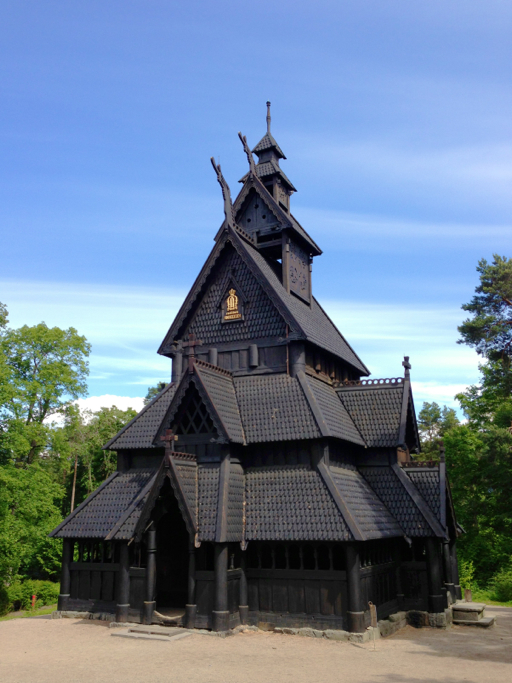 …and here’s the back:

A stave is a vertical wooden post or plank used in building construction. The old Norwegian stave buildings, like this ancient stave church, had vertical posts planted in the ground, supporting the structure above.

The dark color of this stave church is a result of coating the exterior with tar to preserve the wood. 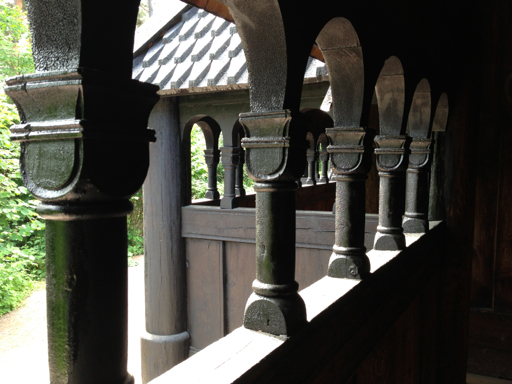 The Gol stave church is 1/3 original timbers, although the interior is nearly all original.

In Medieval times, there were more than 1,000 stave churches in Norway, leaving post-hole marks in the ground as they burned, decayed or were torn down. Today, only a handful still exist.

We’re sure glad they saved this one.