There’s an annual astronomical event called the summer solstice. I know what it is, and you probably do too, but try as I might, I can’t describe it. I’m a visual thinker and this is one picture that I can’t put into words. It has to do with the axial tilt of the earth and its orbit around the sun. If you don’t know what it is, you’ll just have to look it up yourself. Sorry.

Anyway, I thought that the summer solstice this year was June 21st, so last night, June 21st, I woke up at 3:30 a.m. and went outside to see the Midnight Sun on the longest day of the year here in Abisko, Sweden, north of the Arctic Circle. Here’s the view outside our room, looking east (that’s reception and the restaurant in the foreground):

And here’s the view looking west (that’s the old Abisko train station, the biggest building around here, by far):

And here’s the view looking north, straight into the Midnight Sun: 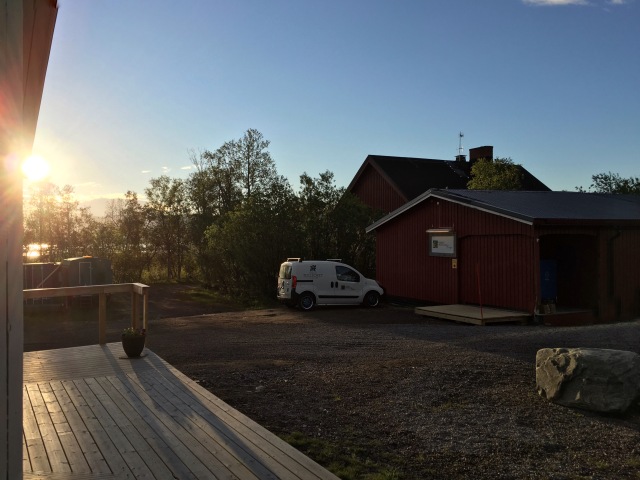 It turns out that the summer solstice this year was on June 20th. Scheiße. Anyway, the sun never went down. In fact, it hasn’t gone down around here since May 23rd and it won’t go down again until July 20th!

Here’s the astronomical data for Narvik, Norway, the nearest astronomical calculation I could find; Narvik is about 35 miles west of us:

By the way, this is the first time in 70 years that there was a full moon on the summer solstice, a “Strawberry Moon,” who knew?

P.S. I’ve had Led Zeppelin’s Immigrant Song running around in my head for a couple days now – you know, “We come from the land of the ice and snow, from the midnight sun where the hot springs flow.” Now you’re infected, too.