Can you say “Gearggevággi?” No? How about “Kärkvagge?” Me, neither. Both of those are Sámi for “Stone Valley;” the first is the older way, following by the modern spelling. I think, but don’t know for sure, that they are both pronounced the same. Anyway, I’m going with “Stone Valley,” for reasons you’ll soon understand.

We figured that the hike in and out of Stone Valley would take the better part of a day. To get there, we had to drive past the trailhead to the village of Vassijure so we could turn around and approach east-bound in order to park along the south side of the road by the trailhead. The roads in northern Sweden have no shoulder – no turnouts or scenic overlooks, either – going hiking is, as a practical matter, limited to where small parking areas have been constructed. Here’s the view heading west toward Vassijure. 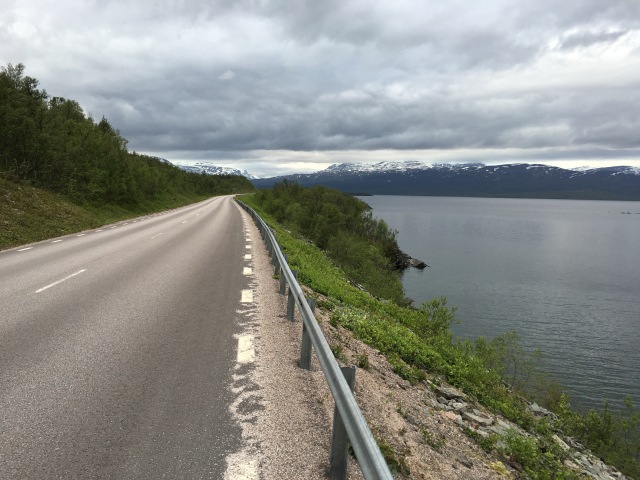 The trailhead was easy to find and not far from a roadside parking area. The hike started on a rocky trail through a young birch forest. 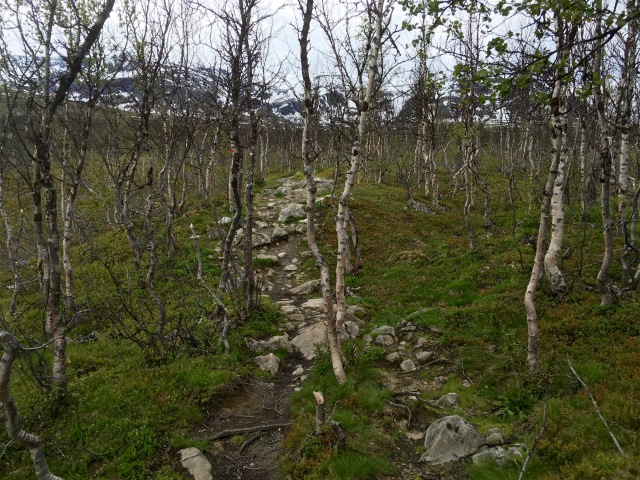 The birch trees used to be much larger, but the whole forest was cut down around 1900 when the Malmbanan (the “Iron Ore Railway”) was built to transport iron ore from Kiruna, Sweden, to the port at Narvik, Norway. I plan to write a post about Kiruna and the iron ore mine there in a couple days. For now, just know that the railway is still in operation and we had to hike over the Malmbanan tracks to get to Stone Valley. Just minutes later, a loaded iron ore train came along. 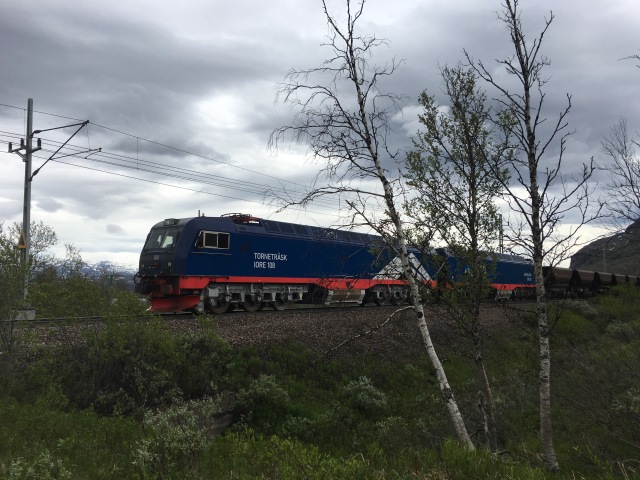 There’s a train station, of sorts, known as Låktatjåkka, right where the trail crosses the tracks. It’s also the last bathroom stop. 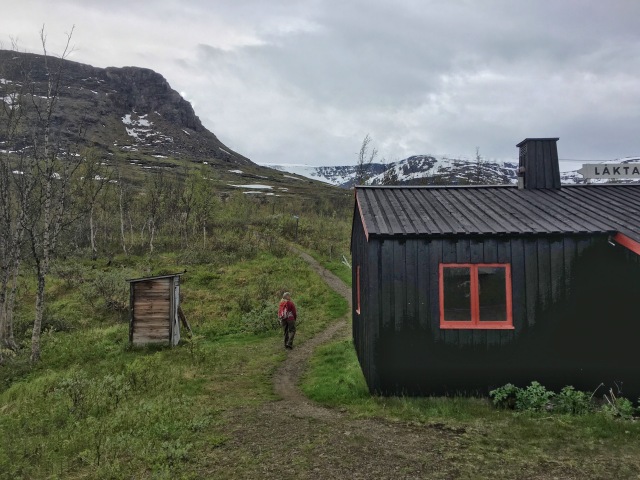 A little ways up the trail, we came to a crossroads and this sign (our destination was Trollsjön lake, supposedly the clearest natural water body in all of Sweden): 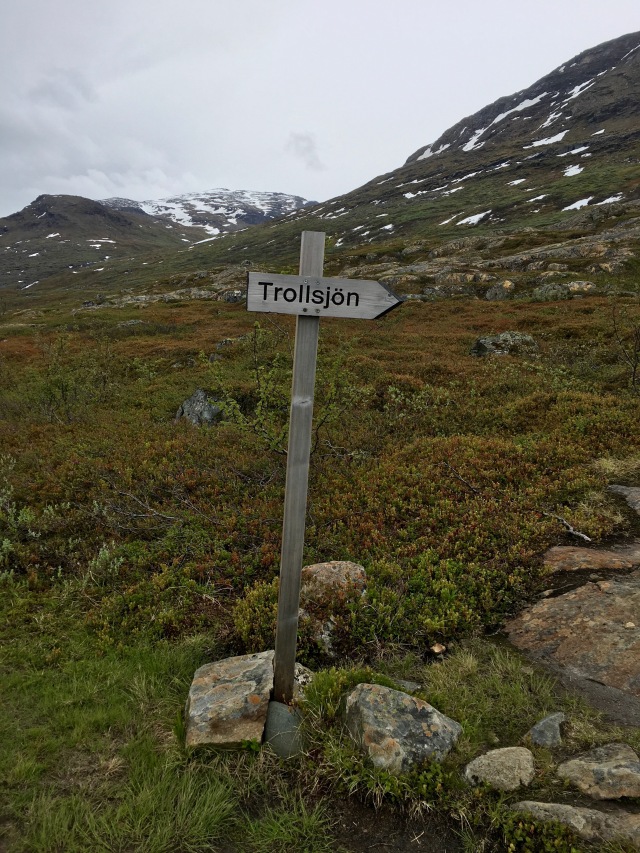 But we were not fooled by such simple instructions and headed off in a different direction. About a half mile later, we realized our mistake and decided to bushwack uphill through the tundra to get back on the designated track. It is necessary in such circumstances to maintain a cheery disposition. 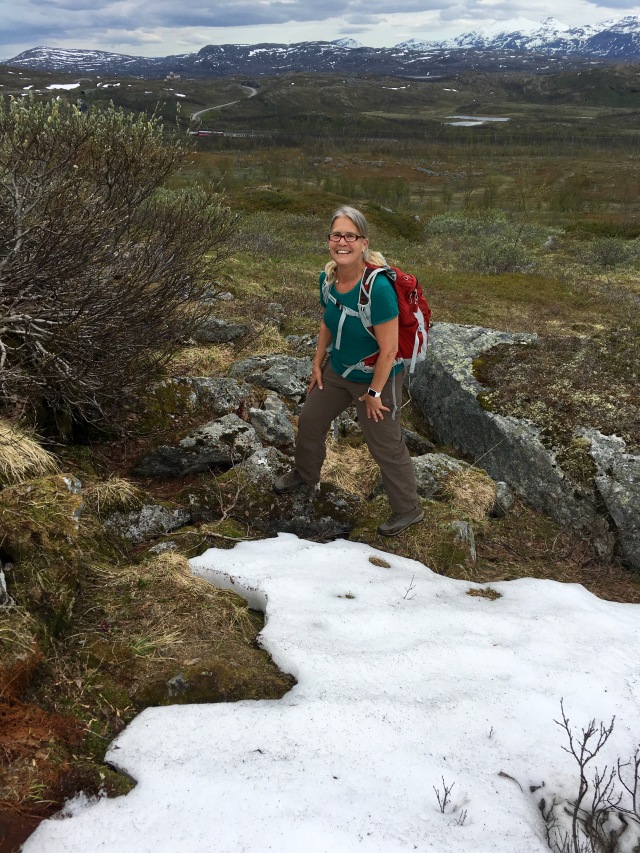 We found ourselves hiking up streambeds and through marshy tundra, over snow fields and snow melt. It was beautiful, but not fun since our boots and socks were soon soaked through. 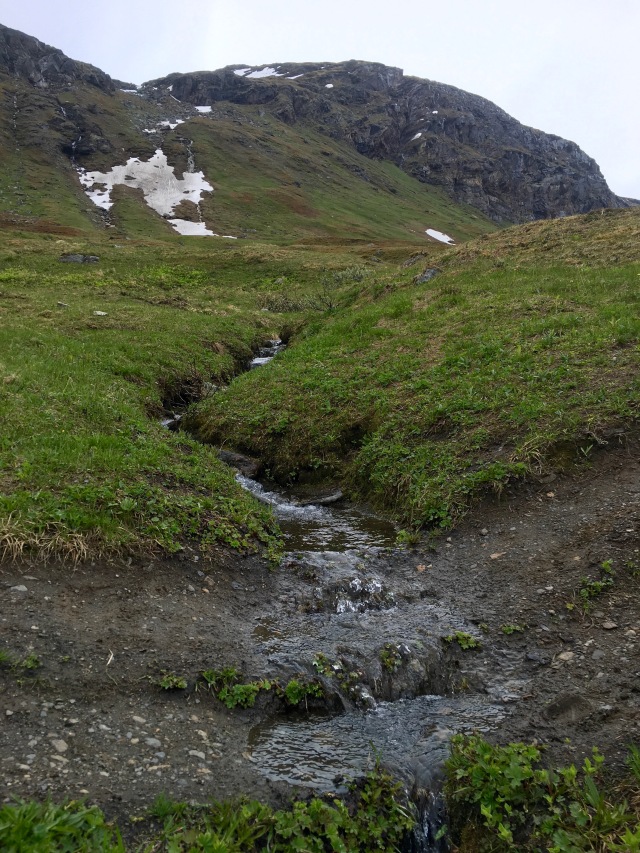 We eventually made it back to the trail where the terrain leveled out at the northern entrance to the valley. Just around the corner from this level ground, we discovered why this area is called the Stone Valley in whatever language you choose to use. The valley is a moraine, created by a retreating glacier about 10,000 years ago and littered with boulders it left in its wake. Stone Valley. 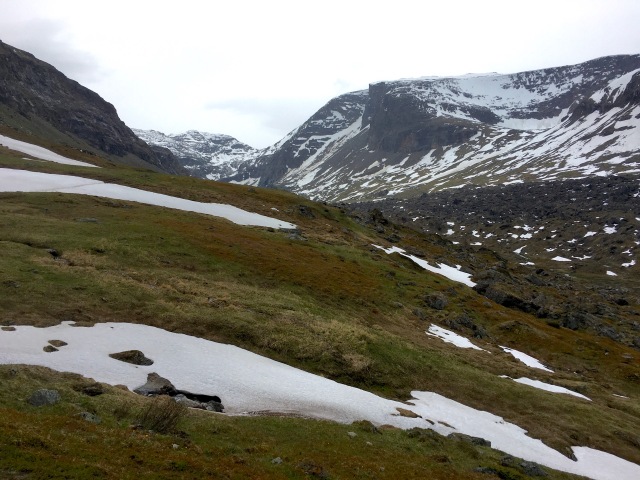 The trail soon turned from tundra to rock. By the way, the mountains in the photo, below, are in Norway. Up to now, we had been donning and shedding layers, but now the weather was taking a definitely cooler turn. 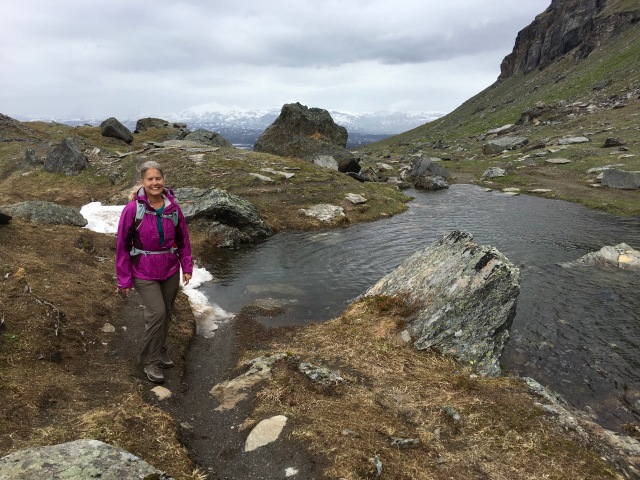 We pushed on into the stiffening wind. 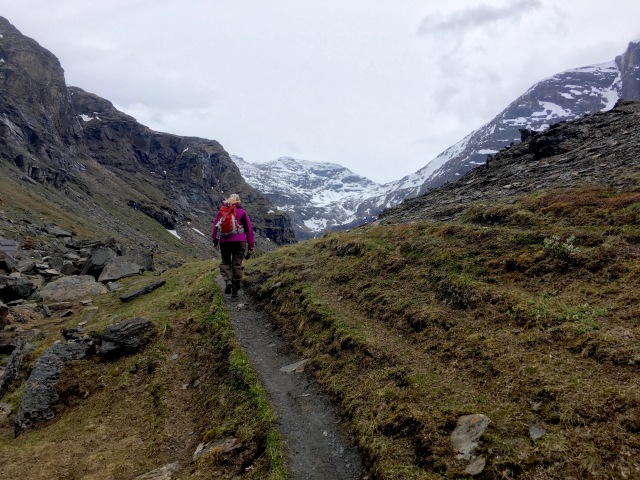 Three miles in and the temperature dropped, the wind increased, it started to rain and the trail began to descend. We had no GPS here and the map we carried was not at a scale that allowed us to pinpoint our location. I climbed up on a boulder to look for lake Trollsjön, but couldn’t see any water body up ahead. 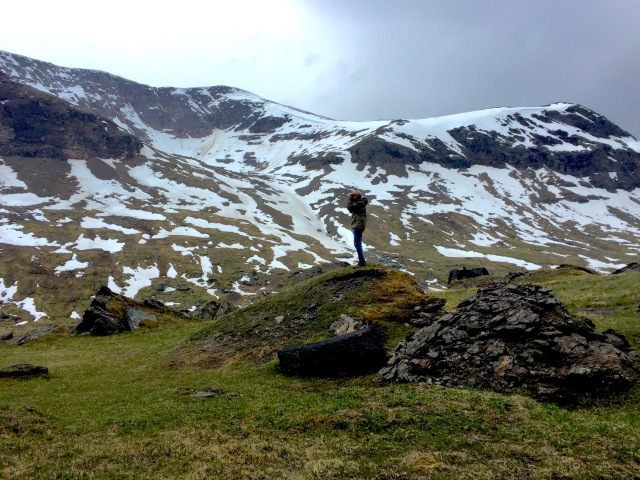 Not wanting to hike back uphill in the cold, wind and rain, we decided to turn back. We later calculated that we were just a few hundred yards from lake Trollsjön when we turned around. Here’s our route: POI 1, parking place; 2, trailhead; 3, intersection with sign, just south of “train station;” 4, start of bushwacking; 5, joinder to main trail; 6, turn-around point. 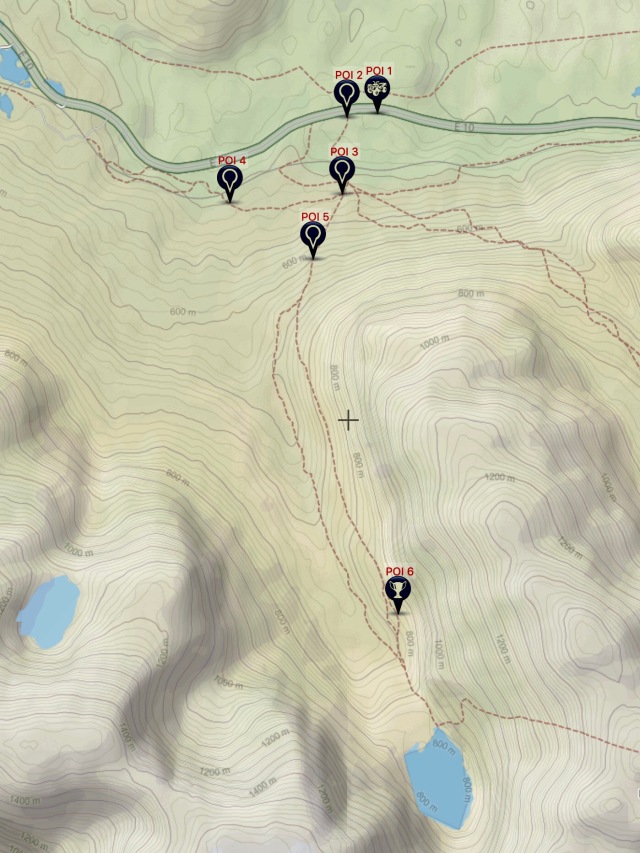 The trek back was no cakewalk, either, but it was nice to have the wind at our backs. 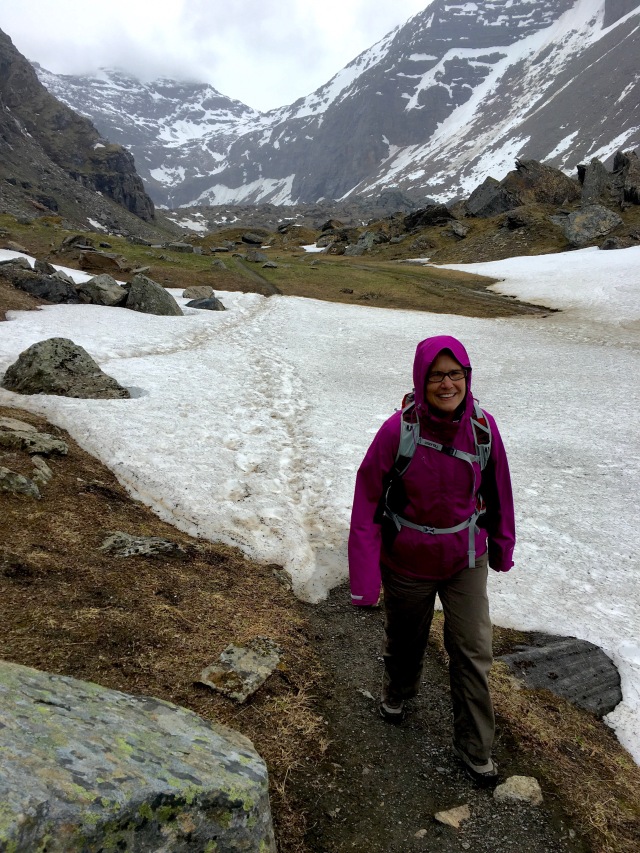 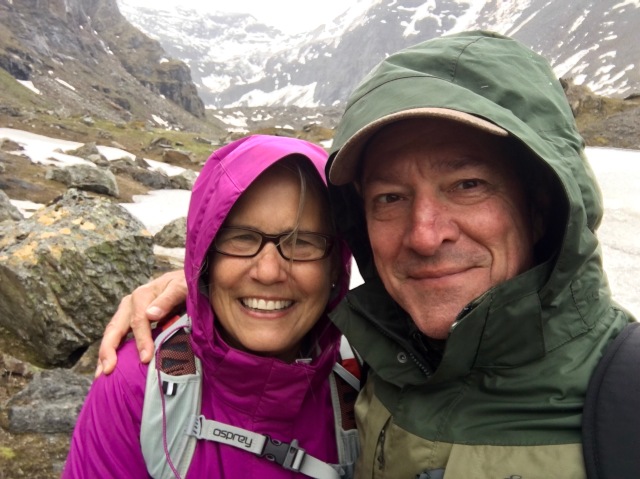 Lake Trollsjön is fed by the Kärkejåkka (the Kärke River) which mostly flows underground from lake Trollsjön down to the delta where we had parked. We found a place not long after we turned around where the water came to the surface, infinity-pool-like. 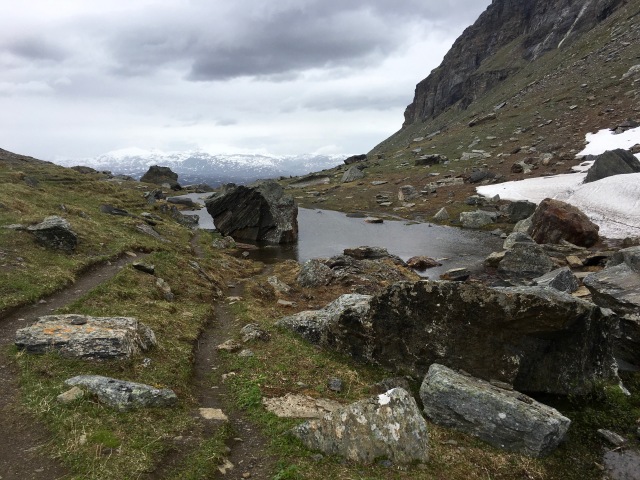 And it was crystal clear water. 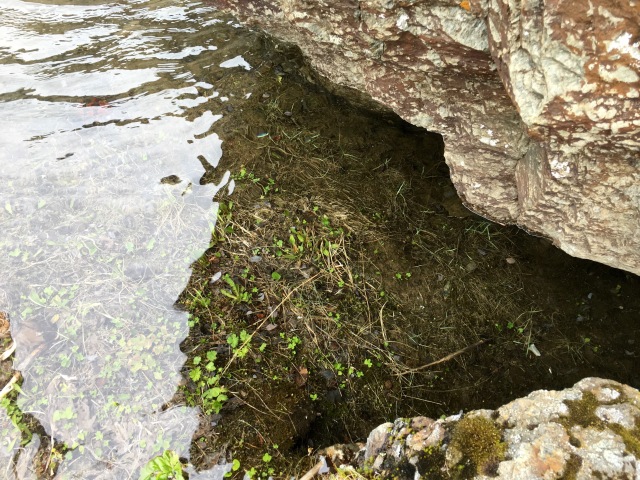 But, we didn’t linger, we needed to cover the three miles back to the car and it looked like it was going to be getting colder – sooner, rather than later. 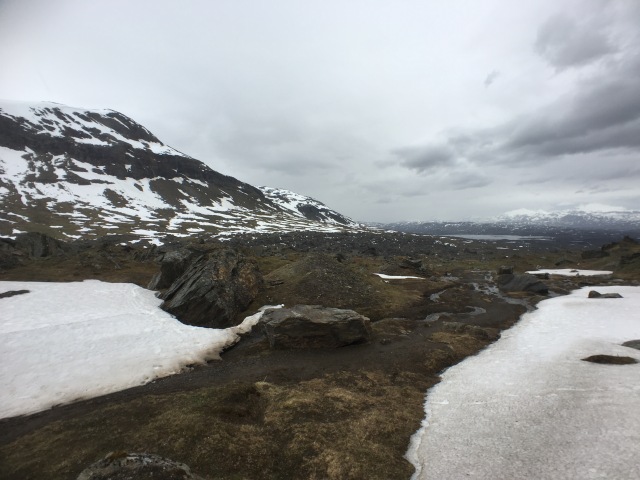 We made it back down to the soggy part of the trail where the water oozed out of the tundra. 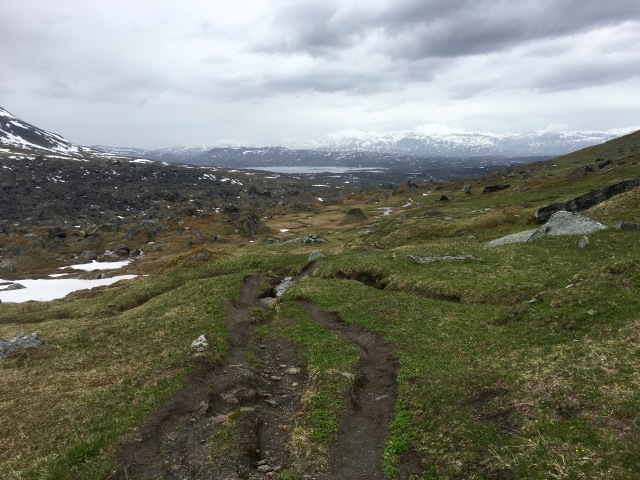 But, our car was in sight. 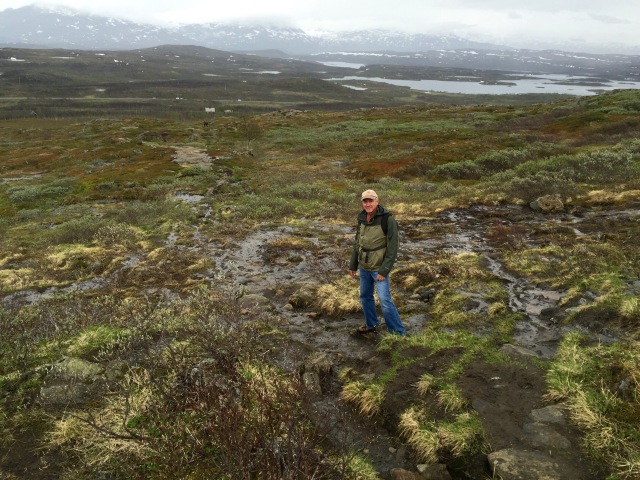 Seven miles with a considerable elevation rise. An invigorating hike.