From Tallinn to Rīga we have been transported by bus with our luggage stored below and the bikes in a trailer behind. For the most part, we have boarded the bus in the morning and been taken to where we begin our day’s bike ride, then we are picked up at an arranged destination later in the day and driven in the bus to our next night’s accomodations with our luggage and bikes in tow.

Arriving in Rīga, we said good-bye to our bus and driver and the group of fellow bikers that were in the guided tour. From Rīga on we will be on our own, the 12 of us transported now in two vans to a starting point from which we would bike for three days alone, our luggage being delivered to our accommodations ahead of us while we cycled.

Outside of Tallinn, my impression as we have driven and pedaled through Estonia and Latvia has been that both nations are relatively poor, agricultural countries. My reading along the way has supported that feeling: Latvia, in particular, has been having economic problems – specifically: a declinging economy; high unemployment; and, an exodus of the younger generation – made possible by admission to the European Union in 2004 (the current unemployment rate for Latvia is 9.6% and its GDP is unchanged over the last quarter; population in Rīga, the capital of Latvia, is down 25% in the last 25 years).

I was a little surprised that this was the case because I had also read that Rīga, which is a deep water port located on the Daugava River, has long been a major center of trade, going back to the Vikings who navigated the Daugava River to conduct trade to the south and east, all the way to the Black Sea and the Middle East. Indeed, a trading post is known to have been located where Rīga now stands since the 1100s.

At any rate, Rīga is doing its best to supplement its trading economy with tourism, which seems to be booming. We were dropped off in the old town and made our way to the hotel, which I’m pretty sure was a convent in times past.

The following day, we decided to be lazy and just wandered the market and old city while two couples from our group biked to the coast at Jūrmala.

There was a signifcant German presence in Latvia and Estonia from the time of the German crusades of the 1200s until 1939 when Hitler and Stalin entered into secret provisions of a German-Soviet Nonagression Pact that delimited spheres of influence in eastern europe for Germany and the Soviet Union; Estonia and Latvia were ceded to the Soviets, together with Lithuania and Finland. A condition of this agreement, however, was that the Baltic Germans residing in Estonia and Latvia would be given time to be resettled in German-occupied Poland before the Soviets would occupy Estonia and Latvia. Accordingly, in 1940, 51,000 Germans left Latvia and 13,700 left Estonia; those that stayed were subsequently killed or deported to the gulags of Siberia by the Soviets when they occupied the region in August 1940. As we all know now, Hitler never intended to fully honor his Pact with the Soviets and in June 1941 Hitler violated the Pact and invaded Russia, although the German invasion ultimately failed at Moscow and Stalingrad. In 1943 the Soviets counter-attacked and by October 1944 they had pushed the Germans completely out of Estonia and Latvia, occupying those countries and utlimately incorporating them into the Soviet Union.

The Rīga Central Market is located in zeppelin hangers constructed by the Germans in WWI. It is, supposedly, the largest market and bazaar in all of Europe.

The hangars seem to each have separate purposes: one for vegetables, 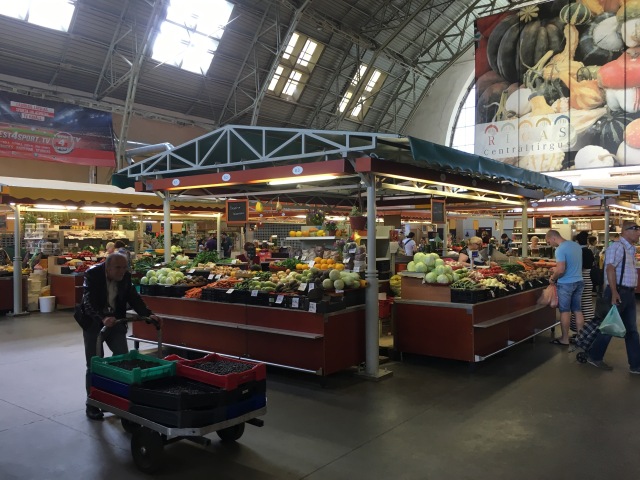 another for meat, another (if I recall correctly) for baked goods and dairy products, and another for seafood. I love how they display their dried fish. 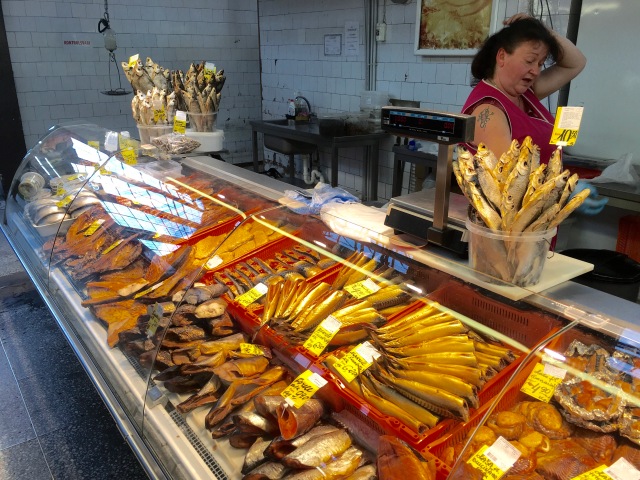 Back outside, and surrounding the zeppelin hangars, were vendors selling clothing, shoes, and produce – basically a giant flea market. 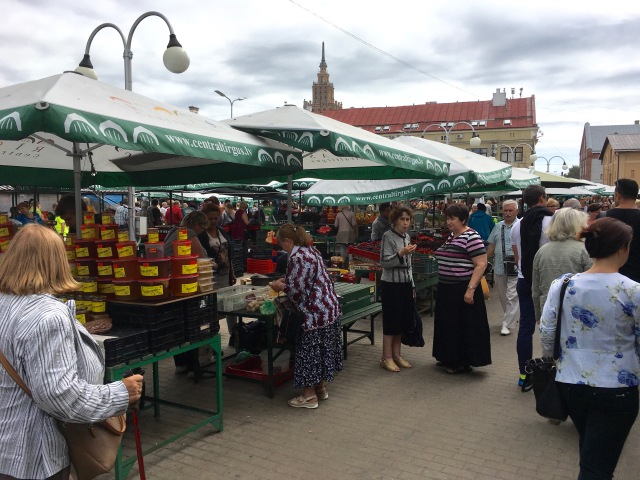 After the market, we wandered through the old Hanseatic city… 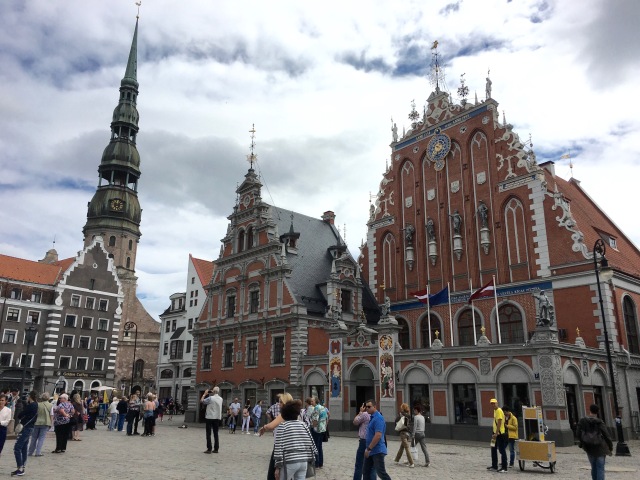 …and along the reconstructed city wall.

Outside the city walls in a nice park called the Bastejkalna park (Bastion Park) where we fled for a little greenery. 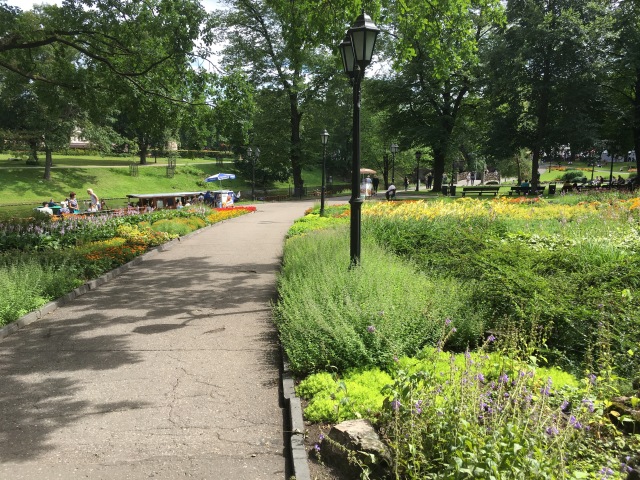 Tomorrow, we leave Latvia for Lithuania and the best part of our bike tour: three days cycling the entire length of the Lithuanian coast and the Curonian Spit.

One thought on “Rīga”