We arrived in Šventoji on the northern end of the Lithuanian coast at 4:00 in the afternoon after riding in the van all day from Rīga. After some debate (given the lateness of the day), we decided to join those of our group that wanted to ride bikes from here to our hotel in Klaipėda, rather than start further down the coast which is what some in our group decided to do.

Lithuania has done a great job constructing bike routes along the coast. We set off on Cycle Route 10 which we would ultimately be taking all the way to Lithuania’s southern border at Russia’s Kaliningrad oblast. The bike route soon took us along the beach as the sky grew ominous. 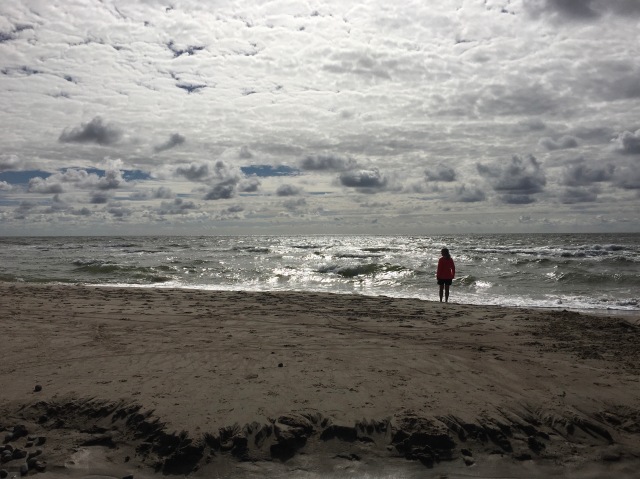 I need to digress for a minute here to tell you that one of the big souvenir items in the shops and kiosks in Rīga is Baltic Amber. In case you don’t know, amber is fossilized tree resin (sap) and it is usually fashioned into jewelry. It’s quite pretty and oftentimes contains imbedded prehistoric insects. Baltic Amber is typically 40 to 60 million years old. More than one of the vendors in Rīga told me that most Baltic Amber is collected along the Baltic seashore, although I also learned that it is mined in Kaliningrad. Apparently, amber floats, so once it is dislodged from the seabed by wave action, it rises to the surface and then washes up on shore. Just to be safe, I bought a piece of Baltic Amber in Rīga, but my hope was to find some in the wild on the Lithuanian beaches. And I think we did:

The big piece is the one I bought in Rīga; it has been polished. The rest we found on the beach just past Šventoji. They’re all very light and one test is to see if any of them float in saltwater. We’ll see.

The sun came back out as we walked along the shore, picking through the stones in search of amber. Here’s what it looked like up and down the beach. 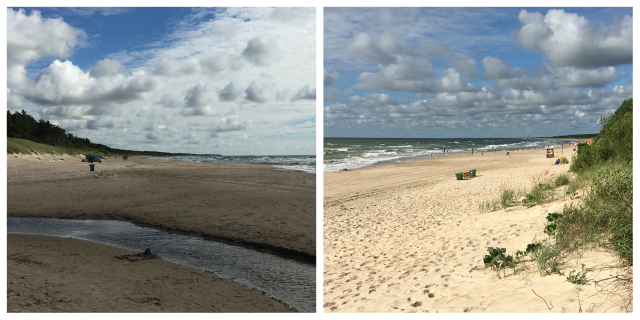 We didn’t linger, however, because we had a long ride ahead of us and no way to get to our hotel except by bike – and, like I said, we didn’t get started until 4:00 p.m. Fortunately, most of the ride was on a wide, paved bike path, much of it through park land.

As we approached Klaipėda, we paralleled the railroad for a while and had to ride in traffic on occasion, but without incident. 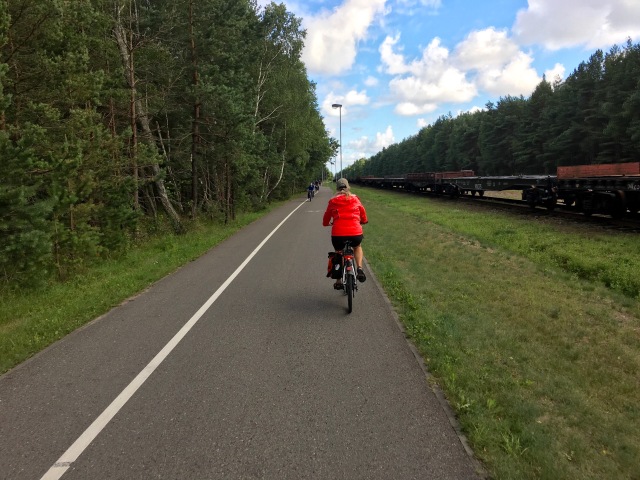 Toward the end of the ride, just as we lost the signs for Cycle Route 10, my iPhone battery died and, along with it, my GPS. No problem, though, I can still read a map – remember those things? We got to the Old Mill Hotel around 7:30, the first to arrive, having pedaled 50 km, that is, 30 miles. It was starting to get easy!