Having spent the night in a very nice hotel just opposite the ferry landing in Klaipėda, the Old Mill Hotel, we awoke rested and ready for our big biking day: 68 km, about 42 miles, an all-time long bike ride for us. But, first, we had to wait for the hand-cranked, swivel bridge to open and close before we could get over to the ferry:

The 5-minute ferry ride from Klaipėda to the Curonian Spit crosses a busy waterway known as the Curonian Lagoon which also looks to be a busy port terminal.

The Curonian Spit is a 60-mile long sand spit running along the better part of the coastlines of Lithuania and the Kaliningrad oblast which is part of Russia separated from the rest of that country by Lithuania and Poland. The entire Curonian Spit is now a UNESCO World Heritage Site and the half that is in Lithuania is a national park. Here’s a map on which I have also sketched our route: 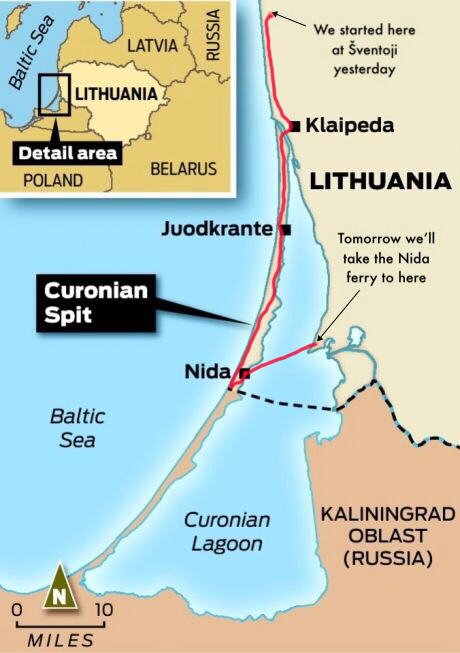 Cycle Route 10 runs the length of the Lithuanian portion of the Spit and it’s a glorious bike ride, alternating from the Baltic side with access to the beach, to the Lagoon side with its marshes and handful of summer resorts. For the first several miles, the path parallels the dunes which rise an average of 100 feet above sea level. We stopped to walk the white sand beach: 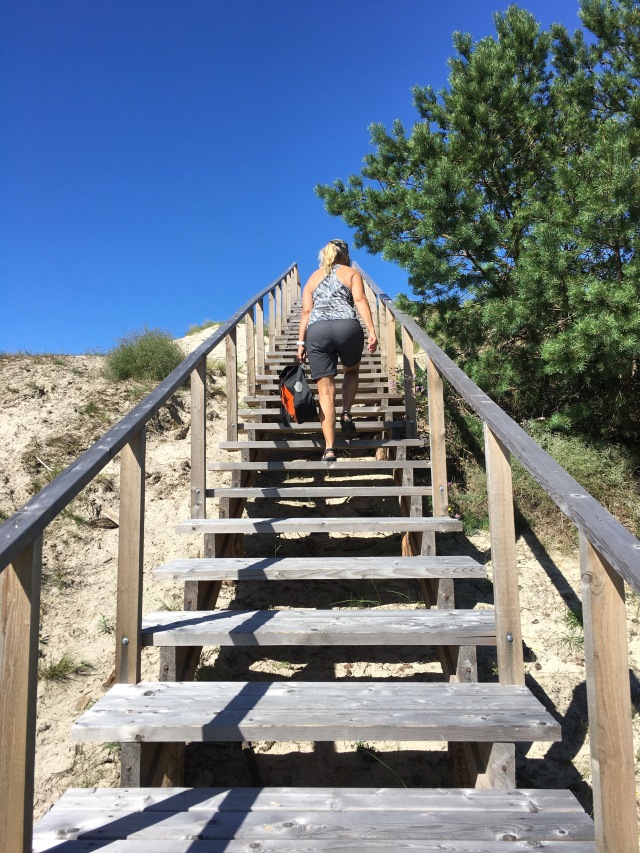 Most of the spit is now covered with trees, as you can see in this photo that I took from the top of the dune on our way back to our bikes:

As we pedaled through the forested parts of the spit, we saw a number of different types of wild mushrooms. It’s very common here in the Baltics at this time of year to find the locals wandering the woods in search of these delectables.

We stopped for lunch in the resort village of Juodkrantė, about halfway through the ride.

Nearly all the tourists visiting the Lithuanian Curonian Spit are German and I found myself communicating in that language as much as in English while we were here. In fact, our van driver spoke no English and found it easier to communicate in German with me than with the actual Germans in the group, probably because they would speak at regular conversational speed and vocabulary, while he and I conversed slowly and deliberately. [Our driver’s joke: During the Soviet years, if a Lithuanian spoke fluent German, he was likely to get shipped to Siberia.] At any rate, we were able to understand each other most of the time. We continued along the bike path on the Lagoon side.

Once again, we were the first to arrive at our destination, the Nerija Hotel in Nida, but that was not our terminus for the day: we wanted to see if we could get into Russia, another 4 km down the road.

We are going to Moscow after we finish the cycling tour and we have Russian visas (not cheap at $350 each). Oddly, the scrutiny we got at the Lithuanian border on the way out was intense. Did they think we were defecting? Finally cleared to leave, we anxiously approached the Russian checkpoint: 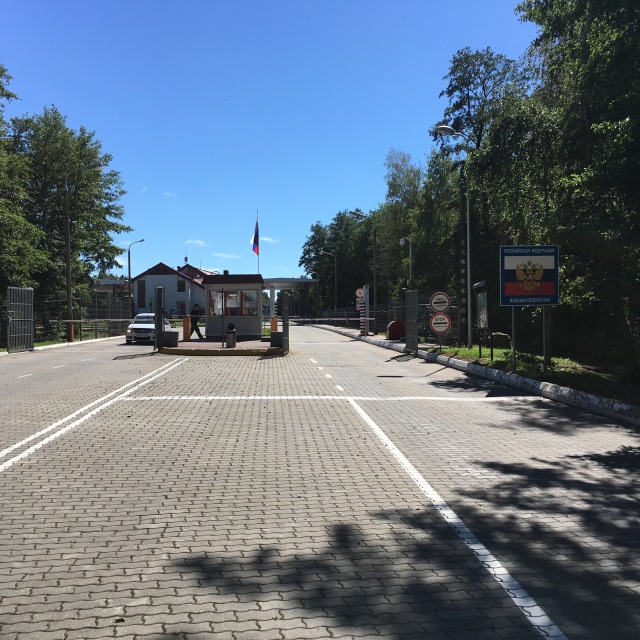 After close inspection of our visas and a call to HQ, the Russian border guard rejected us: our visas were scheduled to begin in three days (our hotel in Moscow had to sponsor our visa application). Dejected, we returned to the Lithuanian border control station where we had to wait for about 15 minutes in “no man’s land” between the two countries.

The crossing back into Lithuania went without a hitch – it was actually easier than leaving – the only question we were asked upon re-entry was, “Schnapps?” Nope, we didn’t have time to smuggle any Schnapps in during the 25 minutes we were out of the country. They let us back in and we pedaled back to the hotel in Nida…

…with a stop at the beach for a quick dip. 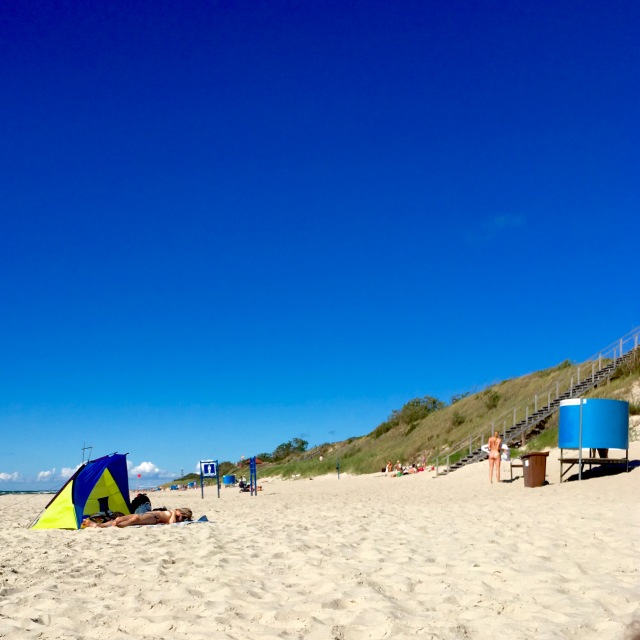