Our taxi ride from Pulkovo Airport to our hotel in the city center of old St. Petersburg took about 1/2 hour. On the way, we passed the Grand Hotel Europe where we stayed for a few days in 2002 when we visited this city with Dale’s mom.

The final several blocks of the ride down Nevsky Prospect, the main drag, made us realize how much the city has changed in the last 14 years. Back in 2002 when we first visited, a mere 11 years after the dissolution of the U.S.S.R., the streets were dirty, the buildings dark, and the atmosphere foreboding. Pedestrians walked with their heads down and without smiles and we wouldn’t have attempted to venture out without our English-speaking guide. Now, Nesvsky Prospect is filled with laughing, smiling young people and tourists of all sorts. English seems prevalent and everything looks clean and brightly renovated.

When we arrived at our destination, Hotel Kempenski, we couldn’t believe our luck. The price we paid last year when we booked these four nights gave rise to no expectation that the Kempenski Hotel would be such a magnificent place to stay. I guess it’s a function of the exchange rate between the ruble and the dollar which has changed so dramatically in our favor over the last two years: the dollar buys twice as many rubles now. 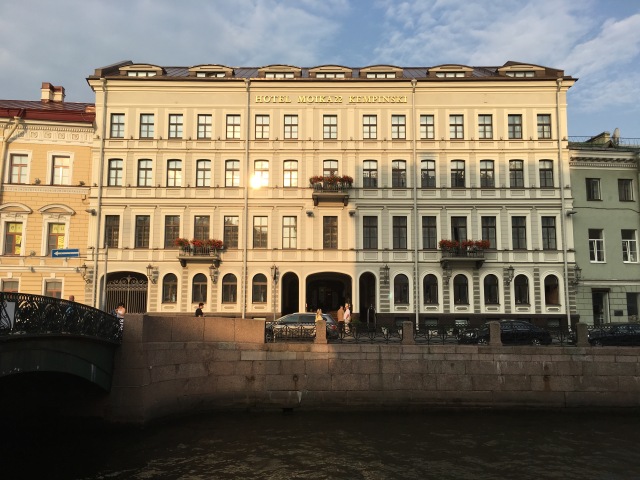 From the tea room in the lobby, it was possible to see the Winter Palace of the Hermitage a mere 200 yards away (it’s that green and white building in the middle of the photo, below). And, amazingly, the wing of the Hermitage that we wanted to visit – the part that houses the Impressionist collection – was literally a stone’s throw away, just across the canal! That’s it on the left, the yellow building with white trim: 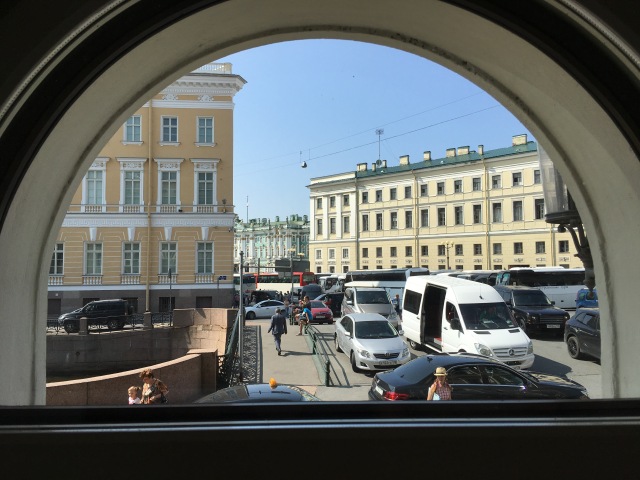 When we walked into our room, we really thought there had been some sort of mistake and they had given us the wrong room: a multi-room suite. I paced it off. It was 2,400 square feet of floor area – 35% bigger than our house in Washington! Really, you read that right: 35% bigger than our entire house. Here’s the second room of the suite (first you walk through a foyer and pass a half-bath):

And here’s the bedroom (it even had a crystal chandelier which you can just make out on the upper right of the photo), complete with his and hers robes and slippers: 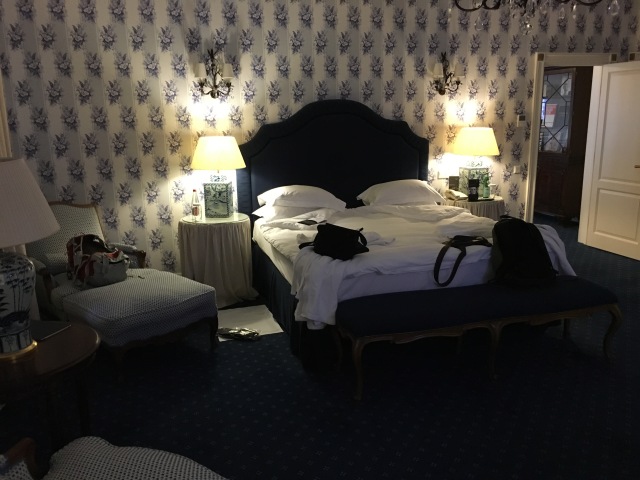 The bathroom was all marble, with a huge shower, a claw-foot bathtub and a double-sink. I had to double-check the email receipt I had from the hotel to make sure I hadn’t misread the cost or been fed a bunch of blarney or given a bait-and-switch by the marketing department; maybe I had the decimal point in the wrong place. Nope, everything was correct. Amazing: cheaper than the Hilton Hotel in Gainesville on a game day!

We changed out of our traveling clothes and headed up to the rooftop restaurant for a cocktail and dinner. On the mezzanine, just outside our room (and audible from within it) was a pianist on a baby grand playing classical music:

This is the top (9th) floor; that’s the restaurant on the right behind the glass, or you can eat outside like those folks across the way decided to do:

We opted to do both: Vodka Martini outside (what else, we’re in Russia, after all); dinner inside in the A/C:

As we were sitting, enjoying the view, we kept hearing a buzzing/whirring sound. Then Dale spotted a camera-equipped drone hovering above us! It descended just past the glass and when we looked over the railing, we spotted the pilot with his remote-control, one floor below us.

In between flights, we watched as the sun set over the Winter Palace. A warm welcome back to St. Petersburg. 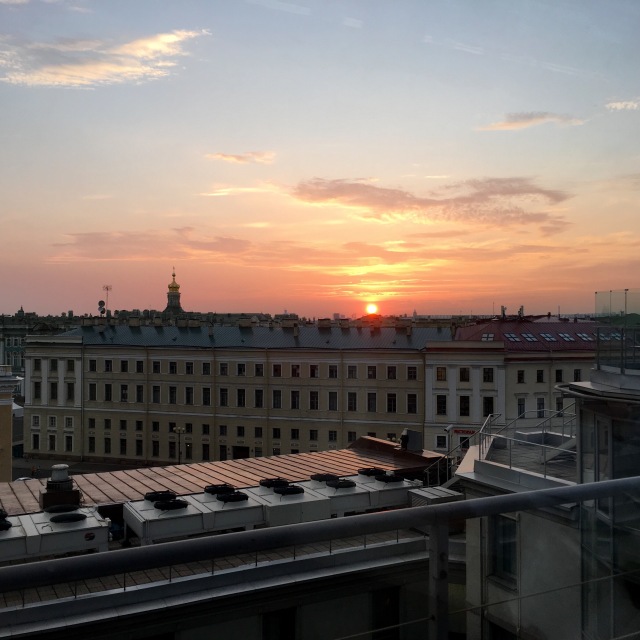