We spent our first day in St. Petersburg resting and relaxing in and around the hotel. After all, there was a Nespresso machine in our room and we could have stayed at the breakfast buffet in the hotel until time for a midnight snack. Breakfast was included with the room and was incredible (who ever heard of a continental breakfast that included eggs benedict?). I just can’t get over Hotel Kempinski; it was the best hotel I have ever stayed in, anywhere.

At any rate, in the early evening, we went on a long walk, starting with Palace Square in the middle of the Hermitage collection of buildings. We were amused by the large number of people that simply decided to sit down on the cobblestones in the square:

We heard a commotion beyond the arch and went to investigate: some sort of political rally. Returning back to the Palace Square, we headed to the base of the Alexander Column to decide where to go next. 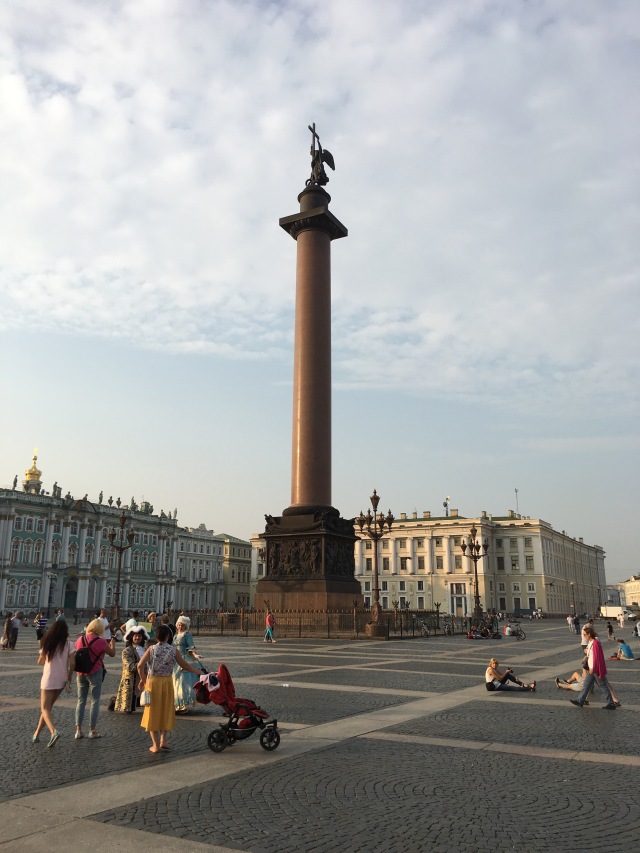 The park in front of the Admiralty building, the headquarters of the Russian Navy, looked interesting: 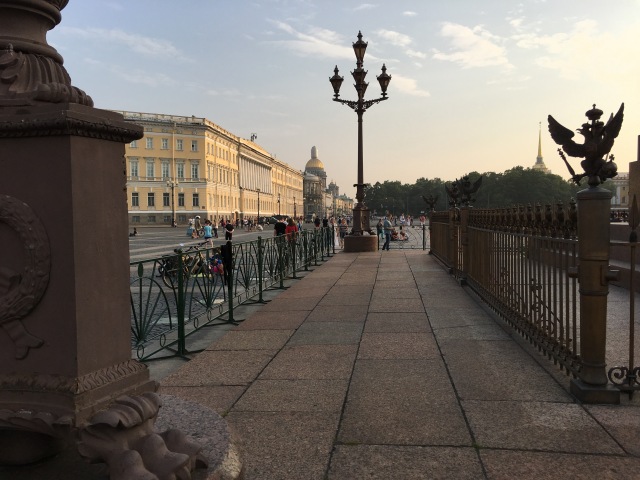 There was a nice promenade through the park, which seemed like a popular place for young people to go to hang out.

At the end of the park, we turned right and walked down to the Neva River which runs through the heart of the city. The Russian Navy was in port!

We walked toward the west, as the ships’ crews lined up for evening review. There was a submarine down by the Leytenanta Shmidta Bridge: Hunt for Red October! 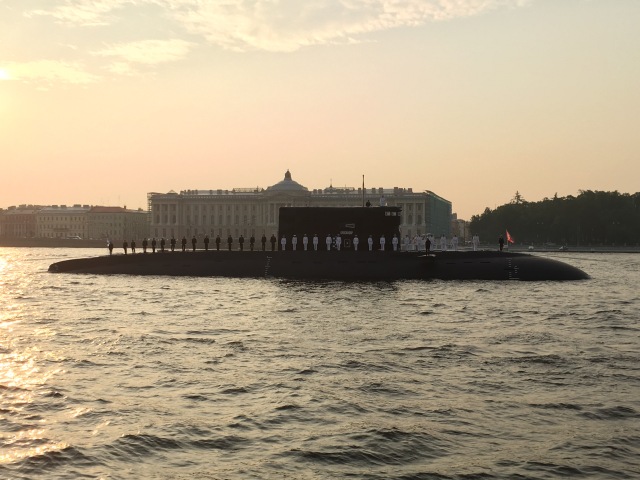 And that sub had quite an escort.

We walked east toward the Dvortsoveyy Bridge to the lead ship, the “АОМИРАП ЭССЕН” (Admiral Essen), the only ship whose name we could read.

The Admiral Essen has an interesting story. It’s a frigate, designed for anti-ship and anti-submarine warfare on the high seas, as well as for anti-aircraft actions both independently and as an escort ship. It is equipped with a 100 mm naval gun (visible on the foredeck), cruise missiles, naval surface-to-air (SAM) missles, torpedoes and a helicopter. The Admiral Essen is one of six ships being built under a single order in a shipyard in Kaliningrad (where we tried to cross the border from Lithuania); they were all to have been powered by Ukrainian-built gas turbine engines, but only three had been completed when the conflict between Russia and Ukraine broke out. As a result, the Ukrainians have refused to supply Russia with the engines for the remaining three ships, so Russia is in the process of trying to sell the unbuilt ships to India which has good relations with Ukraine. The three that have been delivered, including the Admiral Essen, are destined for Russia’s Black Sea Fleet; they all measure 410 feet (124.8 m) in length, have a displacement of 3,620 tons, and are capable of making 30 knots with a range of 4,850 nautical miles.

Isn’t it amazing what you can find out on the internet?