Once the Peter and Paul Fortress was capable of defending the delta of the Neva River, Peter the Great began his grand project of the westernization of Russia by creating a European city on the banks of the Neva. It is said that over 200,000 Russian serfs – effectively, slaves – died while dredging, channelizing and filling the swampland upon which the city of St. Petersburg was built.

In 1712, Tsar Peter moved the capital of Russia from Moscow to his new city of St. Petersburg and also began the construction of a royal residence on the southern bank of the Neva opposite the Peter and Paul Fortress that became known as the Winter Palace. This first palace was a modest 2-story building, but it was replaced in 1721 by a slightly more elegant structure. Although it was the palace construction that got the ball rolling, it took a royal order of the tsar requiring the nobility to also build residences and palaces of their own along the Neva River (and to live in them for half of every year) to get St. Petersburg established as a city worthy of notice.

Peter the Great died in his second Winter Palace in 1725 and was succeded by his wife, Empress Catherine I, who died two years later, passing the crown as a result to their grandson, Peter II. Emperor Peter II expanded the Winter Palace, but after only one year on the throne, he grew weary of St. Petersburg and in 1728 moved the Russian capital and the royal residence back to Moscow, followed by the royal courtiers who were relieved to be freed from their forced residency on the banks of the Neva.

Carrying on an apparent tradition of only lasting for two years, Peter II died in 1730 and his successor, Peter the Great’s niece, Anna Ivanovna, who wasn’t crazy about Moscow, moved the royal residence and the capital back to St. Petersburg in 1732 and that’s where it remained for the next 185 years, until the Russian Revolution of 1917. Also in 1732, Empress Anna Ivanovna further expanded the Winter Palace and it is this fourth version (completed in 1762 at the end of the reign of Empress Anna Ivanovna’s successor, Empress Elizabeth Petrovna) that we saw on our visit on this bright and sunny day. 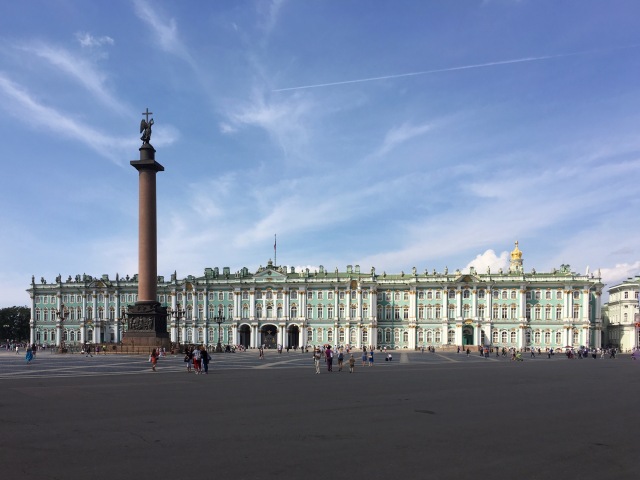 [A note here on the Russian naming system: Unlike the forename/surname system used in the U.S., the Russians use a naming system in which the forename is followed by a patronymic name, that is, a name based on the forename of the father, usually with the addition of the suffix “ovich” for a man and “ovna” for a woman. Thus, the father of Empress Anna Ivanovna was Ivan and the father of Empress Elizabeth Petrovna was Peter. And, so, we have: Vladimir Vladimirovich Putin. Quite a mouthful, eh? Think maybe “Vladimir Putin, Jr.,” would roll of the tongue a little more easily?]

The Winter Palace supposedly has 1,500 rooms, 1,786 doors, 117 staircases and 1,945 windows, but I need to mention here that it is only the exterior of the present structure that is the original, fourth Winter Palace of the 1700s; a fire in 1837 gutted much of the interior.

Opposite Palace Square from the Winter Palace is the semi-circular General Staff Building. We walked past it on our first outing in St. Petersburg and just in case you forgot what it looks like, here’s a photo from that day: 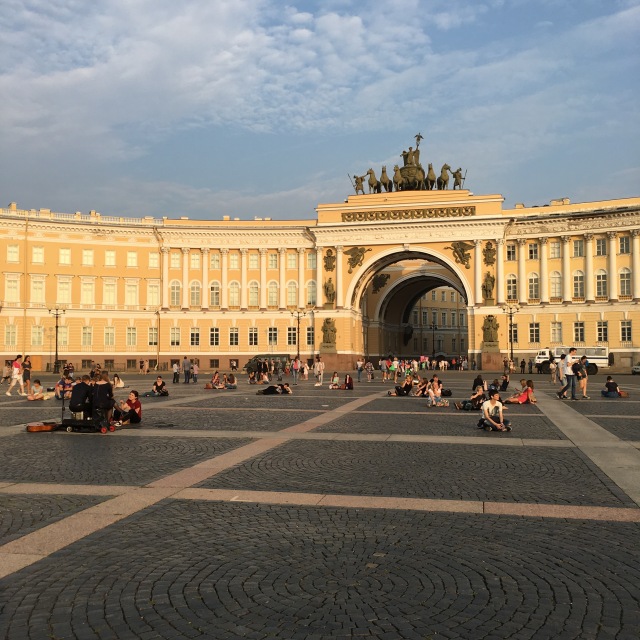 The General Staff Building is divided into two wings, separated by an arch. Until the Russian Revolution of 1917, the western wing housed the General Staff of the military and the eastern wing was home to the Foreign and Finance Ministries of the Russian Empire. In 1993, the eastern wing of the General Staff Building was incorporated into the Hermitage Museum and remodeled. It is a work of art inside in its own right and now houses the Hermitage’s Impressionist collection, including one of our favorite paintings, Paul Gauguin’s Woman Holding a Fruit (1893), a print of which hangs in our dining room in the Florida Keys:

By the way, I don’t make a habit of taking photos of paintings and sculptures when we visit museums because better pictures are available online. But, that’s certainly not the norm for the Chinese. As a friend once remarked, “the Chinese don’t seem to believe they’ve visited anything unless they have a photo of themselves standing in front of it.” I saw this in action as we wandered the Impressionist exhibit in the General Staff Building, watching in amazement as a Chinese woman and her husband moved from painting to painting, photographing each other without ever even looking at any of the masterpieces they were standing next to.

As we were leaving the General Staff Building to go back across the square to the Winter Palace and the main Hermitage Museum complex, through a window we glimpsed our hotel, the Kempinski, across the canal. That glass structure on the roof is where we had dinner and watched the sunset the other night. 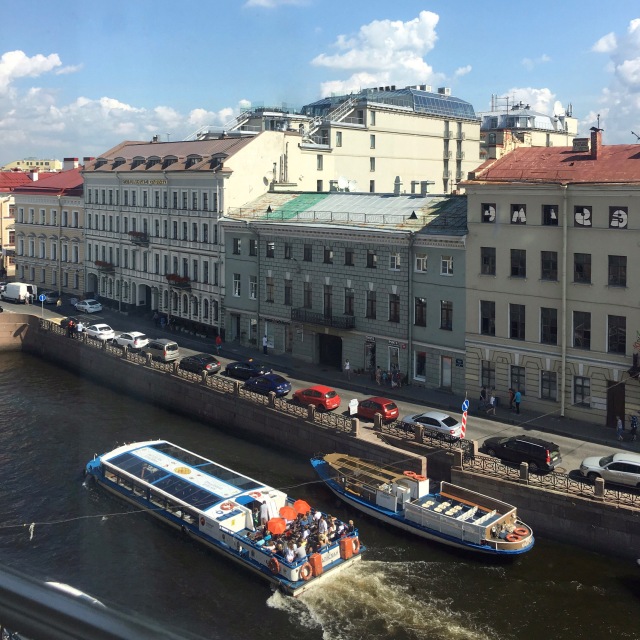 After admiring the paintings of Monet, Sisley, Pissarro, Renoir, Cézanne, Gauguin and Van Gogh, we walked back across the Palace Square to the Hermitage proper which today consists of the Winter Palace, the Small Hermitage, the Great or Old Hermitage and the New Hermitage. We followed the crowd toward the line at the Old Hermitage, but on the way spotted what looked like another entry into the Winter Palace off to the left, so we went that way and got in, avoiding the wait.

During WWI, the Winter Palace was converted into a hospital to care for soldiers returning from the front, so in 1914 most of the art of the Hermitage was crated and shipped elsewhere. Good thing, otherwise it would have been destroyed or looted a few years later during the Russian Revolution of 1917. Once the Soviets were in power, they confiscated many of the great private art collections, including that of the tsars, and distributed the works among the museums in Moscow and St. Petersbug, including the Hermitage. During WWII, as the Germans laid siege to St. Petersburg, the Hermitage collection was again crated and shipped away as a precaution against the possible loss of the city and plundering by the Germans. Again, after the end of the war, the collection was returned.

As we entered through the side door to the Winter Palace, we noticed many works of art were crated and lining the halls. We haven’t been keeping up with the news during our travels. Is St. Petersburg under siege again?

I mentioned that the Winter Palace was constructed in stages and completed at the end of the reign of Empress Elizabeth Petrovna in 1762. But it was her successor, Catherine the Great, Russian Empress from 1762 until her death in 1796, that is credited with creating the Hermitage. Here she is:

Catherine the Great’s ambassadors to Paris, London, Rome and Amsterdam had all been instructed to keep their eyes open for any worthy art works that could be purchased and six different collections were identified and acquired. Needing a place to exhibit her collection, Catherine had the Small Hermitage built adjacent to the Winter Palace in 1766 to house her initial collection where she would retreat for peace and reflection; thus, the name “Hermitage.” But her collection outgrew that space so she expanded the complex in 1787 with the addition of the Great Hermitage which came to be known as the Old Hermitage when the New Hermitage was constructed next to it in 1851.

Over the course of her life, Catherine the Great acquired 4,000 old masters paintings, 38,000 books, 10,000 engraved gems, 10,000 drawings, 16,000 coins and medals, and a natural history collection filling two galleries. Much of this collection is still housed in the Hermitage, supplemented now by the addition of the Impressionist paintings we came to see and several collections of antiquities and Eastern and Russian art. Like the Louvre, it would take days to see everything.