Several months ago, Dale started planning an RV trip to Vancouver Island and I booked a reservation for Monday, May 23, on the ferry from Vancouver’s terminal at Tsawwassen to start the trip. The end of May is the beginning of the high tourist season on Vancouver Island and reservations were recommended. I chose the 10:15 departure to avoid conflict with any early morning traffic.

This past Sunday morning, while reading the local Bellingham paper, I discovered that Monday was a Canadian National holdiday – Victoria Day (for the old queen) – and the end of a 3-day weekend. Lucky for us that I had inadvertently picked the end, rather than the beginning, of a long holiday weekend to start our trip. We left early the next morning and were elated that there were no cars in line at the border crossing when we arrived there at 7:00 am. There was also nobody on the road on the Canada side, which, had it not been a holiday, would have been packed with rush-hour traffic going into Vancouver. Consequently, we arrived at Tsawwassen at 8:00, much earlier than planned, and were able to catch the earlier ferry to Nanaimo.

The Tsawwassen-Nanaimo ferry is the size of a cruiseship, as you can see, below. We were the last ones loaded before casting off. 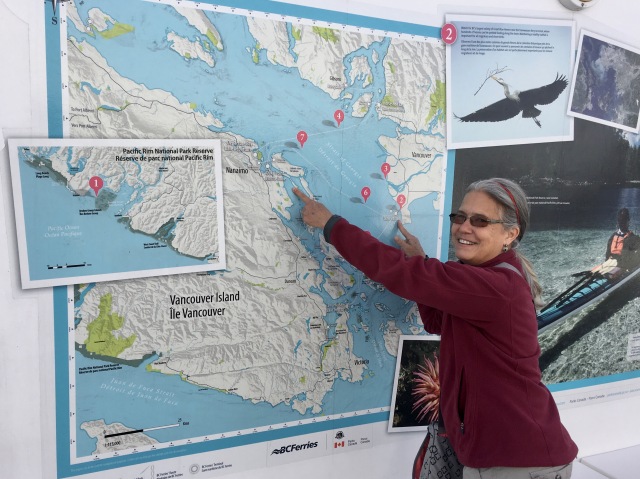 It was a beautiful day for the 2-hour crossing: calm, crisp and clear.

We’ll be on Vancouver Island for two full weeks, traveling its length and breadth (the island, Canada’s largest, is an average of 50 miles wide and 285 miles long). Unbeknown to most Americans, part of Vancouver Island, including its largest city, Victoria, lies south of the 49th parallel that separates most of the U.S.A. from Canada. In fact, our house in Bellingham is further north than Victoria, as you can see from this map:

After landing in Nanaimo, our first destination is Tofino on the wild Pacific Coast!

One thought on “On the Road, Again”