After spending a couple hours watching the surfers, we decided to head back to the car for an off-road drive to the Norm Godfrey Nature Trail near the northwest end of Kennedy Lake, six miles on logging roads. This nature trail boardwalk through an old-growth forest is not in any of the guidebooks or tourist brochures and we only discovered it because I happened to buy a backroads map at the Pacific Rim National Park visitor center. One of my favorite things to do on our RV trips is to go off-roading (we tow a Jeep Wrangler behind our Allegro Breeze RV). You never know what you’ll find away from the mainstream.

Near the end of the drive, we crossed a bridge over the river that feeds Kennedy Lake. Here’s a photo I took from the bridge looking downstream at Kennedy Lake:

Just a little further down the road we reached our destination.

There were a handful of gigantic old trees, supposedly over 1,000 years old! I think they were cedars.

I fell in love with this one and decided to give it a little hug: 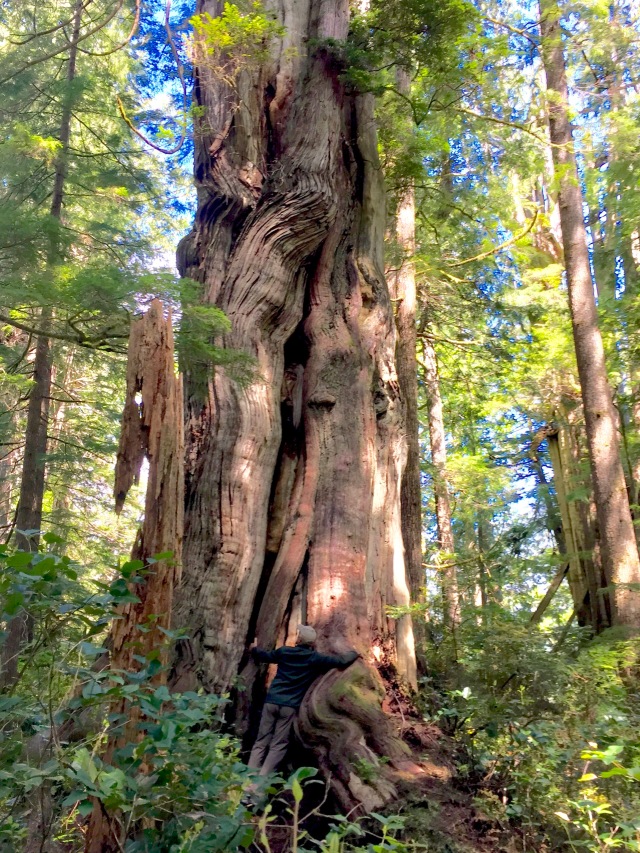 At the end of the road (literally) there was another bridge, although it was impassable. Two young women had arrived there before us and were sunning themselves on the bridge; they had moved to Tofino from Ottawa “to escape the cold.” Everything’s relative, I suppose.

Before heading back to the Jeep, I took this photo from the second bridge looking north at the Clayoquot Arm of Kennedy Lake. It’s beautiful everywhere you look out here.