Tuesday started off looking like a cold, windy, overcast day – perfect for a walk along the coast in search of a lighthouse. So, off we went, driving 25 miles south to the village of Ucluelet, settled in 1870 as a trading post catering to sealers.

Ucluelet (pronounced, “you-clue-let”) sounded to me like an aboriginal name, so I looked it up. According to Wikipedia, “Ucluelet means ‘people of the safe harbour’ in the indigenous Nuu-chah-nulth (Nootka) language.” I’ll buy that. It also looks like the lands around (and possibly including) the village of Ucluelet are part of the Ucluelet First Nation reservation. Here’s how the Ucluelet spell their tribal name: Yuułuʔiłʔatḥ. Don’t challenge these people to a spelling bee.

If you look at the map in my earlier post, you’ll see that Tofino and Ucluelet are the only towns on the Pacific coast of Vancouver Island and they take the full brunt of the storms and surf from that ocean, which explains why the area is known as a surfers’ paradise (more on that in another post). You’ll also see that Tofino and Ucluelet straddle the Pacific Rim National Park Reserve. What you won’t see is that the 49th parallel runs right through the National Park about midway between the two towns. So, Tofino lies on the Canadian side of what on the mainland is the dividing line between Canada and the U.S.A., while Ucluelet lies south of it.

We arrived in Ucluelet in the late morning and drove straight to the parking area for the Lighthouse Loop and got started by hiking to the point. Grey and foggy, just as we anticipated; and there was even a fog horn sounding in the distance.

We were all set for whatever weather we might encounter. 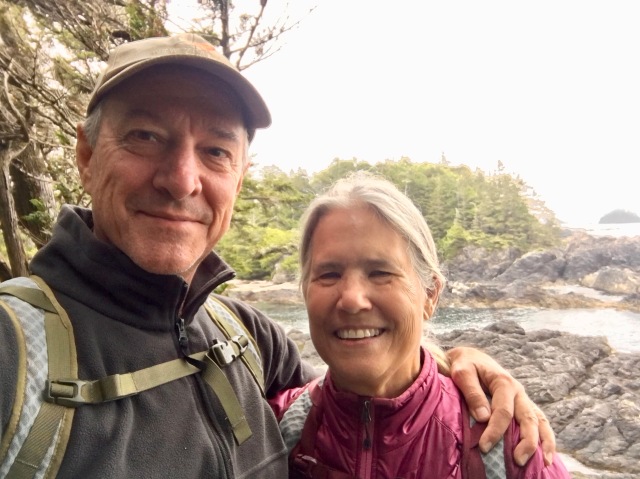 It wasn’t long before we had worked our way around the point to the Amphitrite Lighthouse, now out of service.

This craggy coast gets more than its fair share of wind and waves.

The hike took about 1.5 hours with side excursions to the many viewpoints and scrambles down to the water and we made it back to the car just as it started to rain. That turned out to be a good excuse to stop in town for lunch before our second hike of the day through the Ancient Cedars and Artist Loops sections of the Wild Pacific Trail. Here’s one of those ancient cedars: 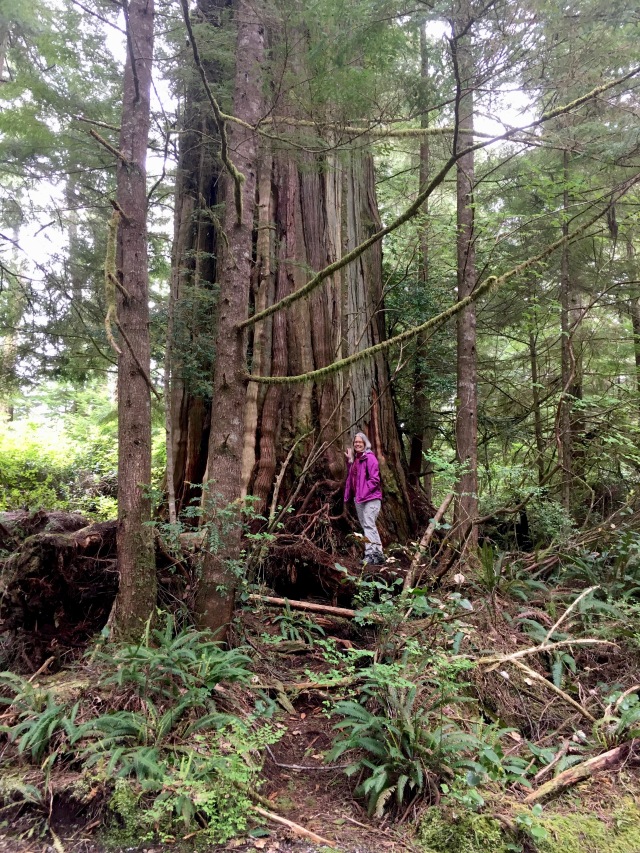 I found another tree more to my liking, since it seemed to be calling my name: “hey, U!”

We decided to head back to Tofino for dinner at The Shelter. If you ever visit Tofino, this is the only restaurant you need to go to – good food, good prices, good service and what a view!