The Vietnam War was a formative event for my generation. I remember watching the nightly Six O’Clock News war footage and body count as a teenager, wondering if I would end up being drafted to fight in far away Southeast Asia when I came of age – and what I would do if that happened. As it turned out, my birthday was picked #1 in the draft lottery in 1974, the year I turned 18, but by then the call-ups had stopped and three months later the draft was canceled.

But my experience was absolutely nothing compared to those young American men who did enlist or get drafted, to say nothing of the millions of Vietnamese who found their families torn apart, their loved ones maimed and killed, and their country brought to the very brink of complete destruction. It has taken a generation for the Vietnamese people to rebuild, something they have very successfully done, despite everything they have had to endure.

While we Americans like to remember the Vietnam War as a red-line battle between democracy and communism (Vietnam, by the way, is still a communist country, one of only four in the world), it was, in actuality, the final struggle in a centuries-old civil war between the northern and southern factions within and without Vietnam, influenced, respectively, by China and Southeast Asia, including India.

I mentioned in prior posts the French colonization of Vietnam that began in the 1800s and ended in 1954. I did not, however, mention the interregnum of World War II, during which time the Japanese invaded and occupied Vietnam, ultimately surrendering the north to Ho Chi Minh upon Japan’s defeat in 1945, at which time Ho declared Vietnam independent.

The Allies, however, supported the reoccupation of Vietnam by the French, leading to the Indochina War which ultimately ended in 1954 with the victory of the Viet Minh over France. The settlement reached at the Geneva Convention that year included the Viet Minh retreating north of the 17th parallel, the French leaving Vietnam entirely, and the governance of south Vietnam being handed off to what was essentially a U.S. supported provisional government that became the Republic of Vietnam under Preisdent Diem the following year, 1955.

But the provision of the Geneva Accords that turned out to be the monkey wrench in the works was the call for a country-wide election in a unified Vietnam in 1956. Only the Viet Minh and the French had agreed to this provision; neither the provisional government of South Vietnam nor the United States signed on to this concept and South Vietnam soon rejected a unified country-wide election. As a result, the Viet Minh sent insurgents south to infiltrate all aspects of South Vietnamese society. In response, the United States helped South Vietnam build a military to defend itself from communist take-over by sending military advisers, military hardware and financial support.

Throughout the late 1950s and 1960s, the Viet Minh moved troops and supplies south along Vietnam’s border with Laos and Cambodia on what came to be known as the Ho Chi Minh Trail. While we were in Saigon (now Ho Chi Minh City) we visited the City Museum where I took this photo of one of the many bicycles used by the Viet Minh on the Trail for this purpose: 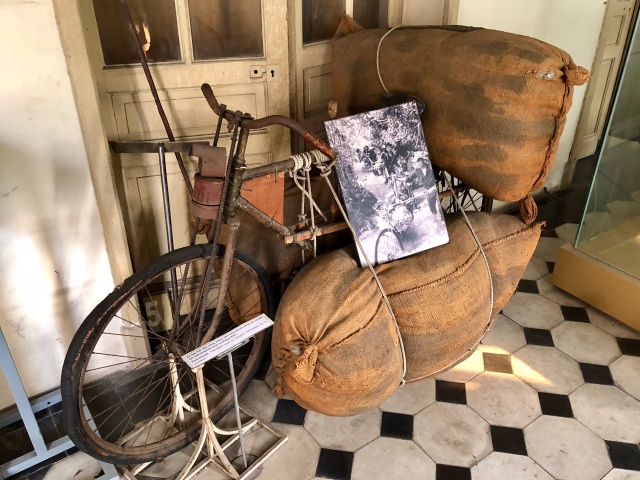 Also during the late 1950s and early ’60s, South Vietnam was in continual turmoil, resulting in part from corruption within the Diem regime, as well as the interference of the north through assassination of more than 400 government officials, terrorist bombings, and guerilla attacks on both South Vietnamese troops (the ARVN) and U.S. advisers and personnel.

By 1960, Ho Chi Minh had imposed universal conscription in the north and formed the National Liberation Front in the south (commonly known as the Viet Cong) with the object of unifying the country under communist rule by military force. Infiltration of the South by the North continued.

In November 1963, John F. Kennedy (JFK), who had been elected President of the U.S. in 1960, was assassinated in Dallas, Texas, and Lyndon Johnson (LBJ), the then-Vice President, became U.S president. Up to this point, the United States did not have ground troops in Vietnam, but LBJ changed that before even finishing the balance of JFK’s term, using a questionable incident in the Gulf of Tonkin as the trigger to escalate the nascent war in Vietnam.

Almost immediately after being “reelected” in 1964, LBJ approved “Operation Rolling Thunder,” a 3-year sustained bombing operation in North Vietnam, pummeling the jungle into sawdust. In the photo, below, which I took at the War Remnants Museum in Saigon, you can see a spotter plane and one of the jet fighters likely used in Operation Rolling Thunder. 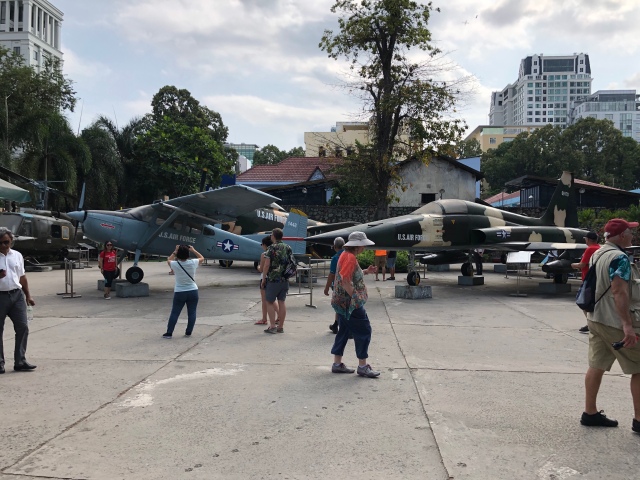 By late 1965, the Marines had landed at Da Nang and established a base and airfield there, just 20 miles from where I now sit in Hoi An. By now, U.S. troops levels topped 200,000 and the United States was “all in.” Troop build-up continued through 1966 and bombing of the North further escalated to include B-52s, the big bombers.

In 1967, a massive system of tunnels built by the Viet Cong was discovered to the east of Saigon and U.S. and ARVN troops launched a seek and destroy offensive called Operation Cedar Falls to clear the area, now known as the Cu Chi Tunnels. We visited the Tunnels before leaving Ho Chi Minh City a few days ago. 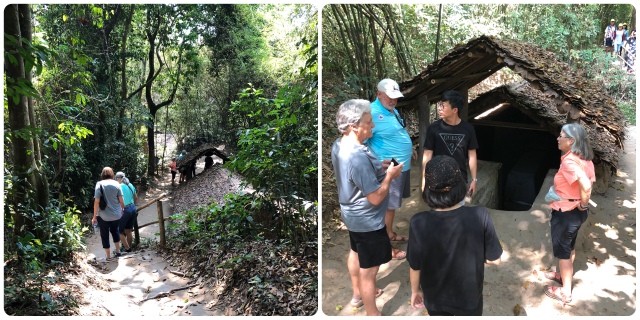 Several of the tunnels are still intact and open to the public, despite massive carpet bombing of the area in 1967. We descended: 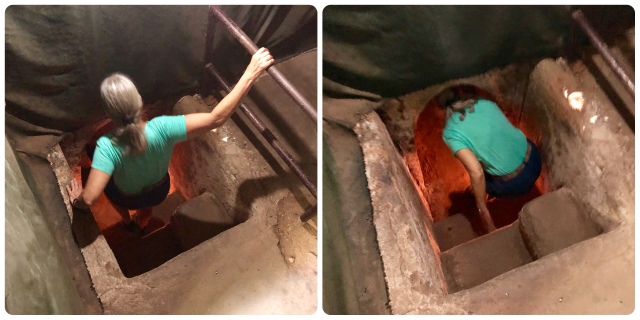 It’s a tight fit down there. 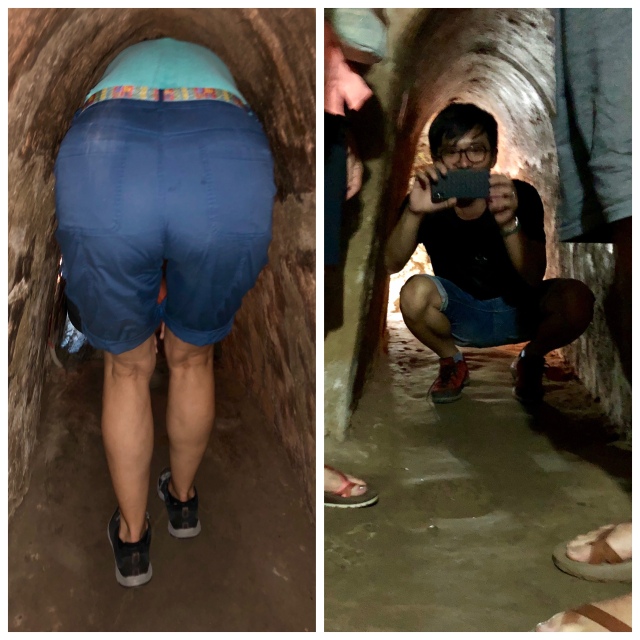 Meanwhile, back in the United States, protests against the war intensified.

In January 1968, the Viet Minh and Viet Cong launched the Tet Offensive, targeting numerous cities throughout South Vietnam, including the capital in Saigon, as well as the ancient capital city of Hue. Within days, however, U.S. and ARVN forces had driven the North Vietnamese back and reclaimed nearly everything, with the main exception of Hue which we will be visiting tomorrow. The battle for Hue continued through February.

By March 1968, vengeance was in the air when Charlie Company of the 1st Battalion, 20th Infantry Regiment, 11th Brigade, 23rd U.S. Infantry Division, was dropped by helicopter into the rice paddies near Son My, about 90 miles south along the coast from Da Nang. Things spun out of control immediately in what Americans know as the My Lai Massacre, infamous to the Vietnamese as “Son My.” 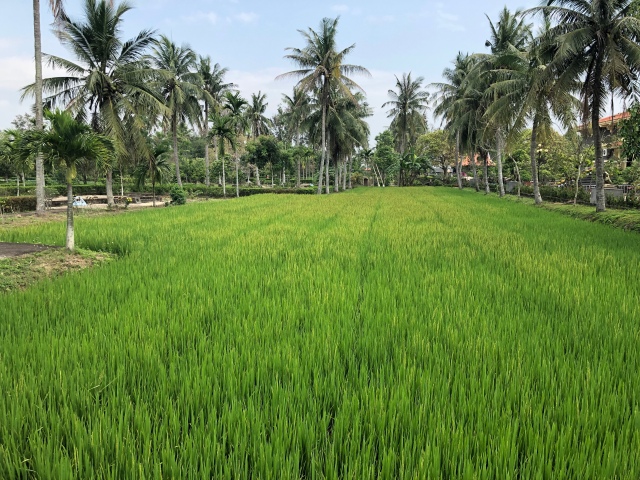 After visiting the fish market Friday morning, we visited the Son My Memorial. It was an emotional and distressing experience. There is a museum there that graphically depicts the horrors of March 18, 1968, when Lt. William Calley ordered the men of the 1st Platoon of Charlie Company to open fire on anyone they came in contact with, purportedly on the direction of his commanding officer, Capt. Ernest Medina, who asserted that all non-combatant villagers would have been away at the nearby market and anyone left in the village this late in the day would be either Viet Cong or a collaborator. [Lt. Calley was an alumnus of Miami Edison High School in Miami; he currently lives in Gainesville, Florida.]

The docent at the museum explained where and how the massacre began. Surrounding us in the museum were horrific photographs of women, children and old men that had been indiscriminately gunned down by U.S. soldiers of the 1st, 2nd and 3rd Platoons of Charlie Company. Twenty-six soldiers and officers were ultimately charged and courtmartialed, but only Lt. Calley was convicted of murder – he was ultimately pardoned by President Richard Nixon after serving only 3 1/2 years under house arrest. 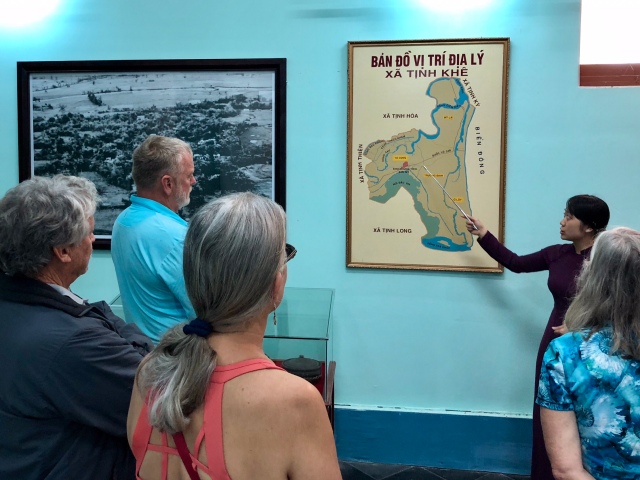 With the exception of the photographs of dead and mutilated villagers inside the museum, the Son My Memorial focuses on cataloguing the atrocities committed that day. It is over-powering in its simplicity.

In front of the destroyed remnants of each village residence is a small monument listing the occupants that had been murdered there by name, sex and age. 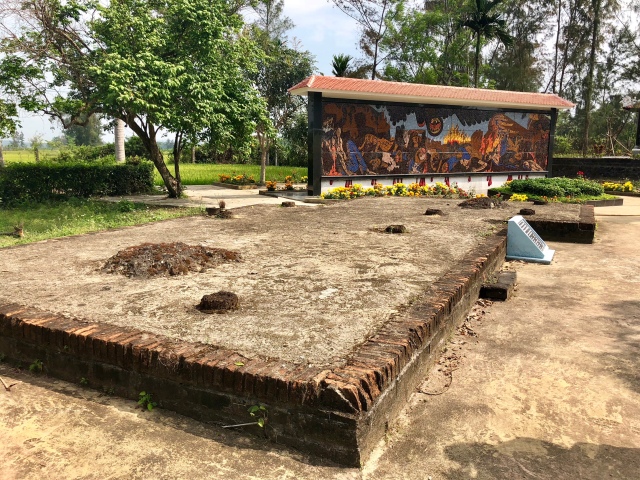 The memorial, below, informed us that in this irrigation ditch, Lt. Calley had brutally murdered 109 villagers, leaving their bodies in heaps in the ditch. The building in the background is a temple in which we were invited to honor the people that were massacred here.

As I stood before the altar in that building, I began to sob uncontrollably. I was simply overcome by the fact that my fellow Americans could do such a thing, even in the midst of war; that so many innocent people had been murdered without cause or justification; that the entire episode had been covered up by the U.S. military and government; that my path has crossed that of the main perpetrator of this atrocity in cities of my residency in Florida, not once, but twice; and, that but for the grace of God, I could have been one of those soldiers. 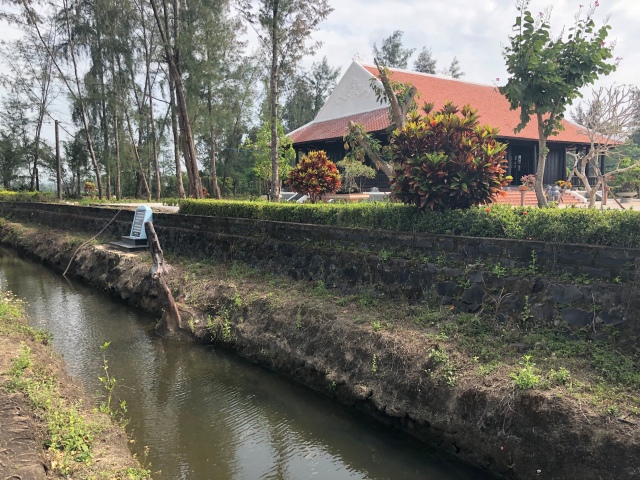 There were over 500 villagers murdered here. 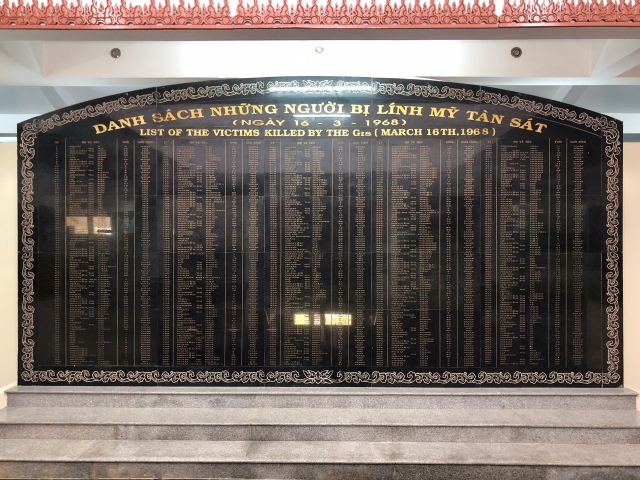 But Son My is not the only memorial to civilian casualties of the Vietnam War on this stretch of the Vietnamese coast. On our drive back to Hoi An, we passed through a government-owned wasteland littered with tombs of non-combatants that died during the War. It went on for miles. 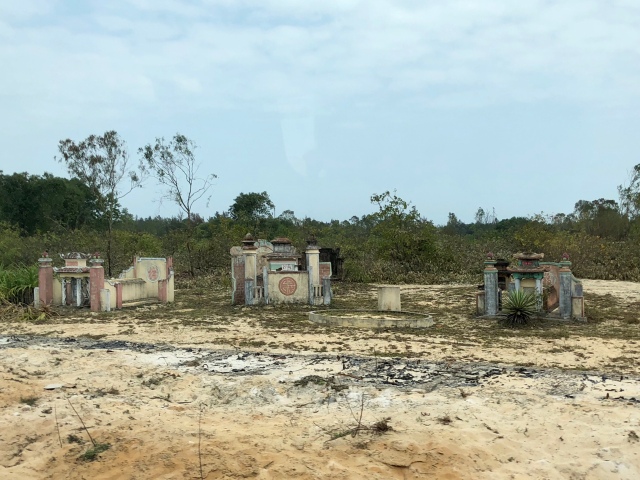 The My Lai Massacre came to the attention of the American public in late 1969 and Americans were horrified. It altered the mood of the American public. War protests in the U.S. intensified. Today, My Lai is recognized by historians as the turning point of the war. Notwithstanding the fact that U.S. and ARVN forces had defeated the Viet Minh and Viet Cong in the Tet Offensive, the American people had had enough, calling for an end to U.S. involvement in Vietnam.