After leaving the Inari Shrine, we visited the Rengeō-in Buddhist temple, commonly known as Sanjusangendo, a short distance to the north. “Sanjūsan-gen-dō” translates to “33-interval-temple” which relates to the building’s architecture of 34 columns, creating 33 intervening spaces.

The number 33 has special significance with regard to the goddess Kannon, to whom this temple is devoted. Kannon is said to personify compassion and to be sympathetic to the prayers and cries of those in difficulty in order to help them achieve salvation. According to the Lotus Sutra, a principal Buddhist scripture (to the extent that Buddhism has “Scripture”), Kannon can take on 33 different forms when aiding devotees, including that of a monk, nun, child, general, king, dragon or Buddha.

The building is huge, measuring 120 meters, nearly 400 feet long. Here are two photos I took of the temple, first from the front, then from the rear. 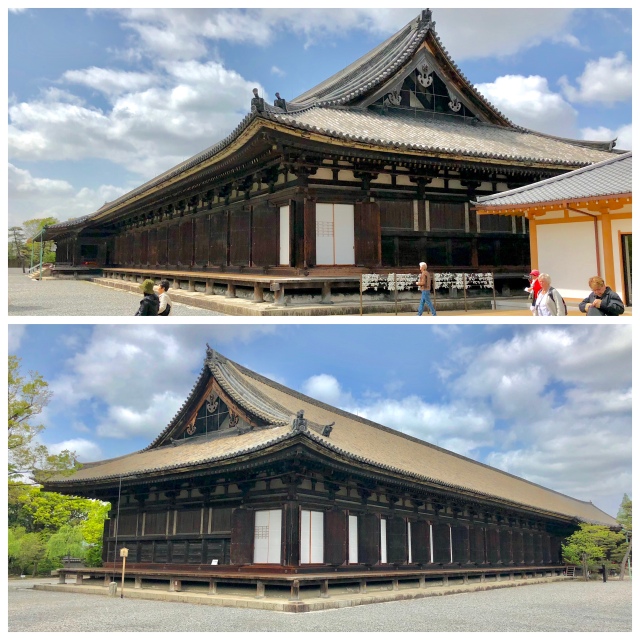 The top photo, below, is of the temple’s side entrance, halfway down the building’s length. We also toured the inside of the temple, but photography was not allowed, which is a shame, because inside there are 1,000 human-size statues of Kannon carved from Japanese cypress and clad in gold leaf – 500 on either side of a centered 11-foot tall seated Kannon statue. The statutes, as well as the building itself, are all over 700 years old. I downloaded a photograph of the interior from the temple’s website (bottom photo), but it really doesn’t do justice to the scene. 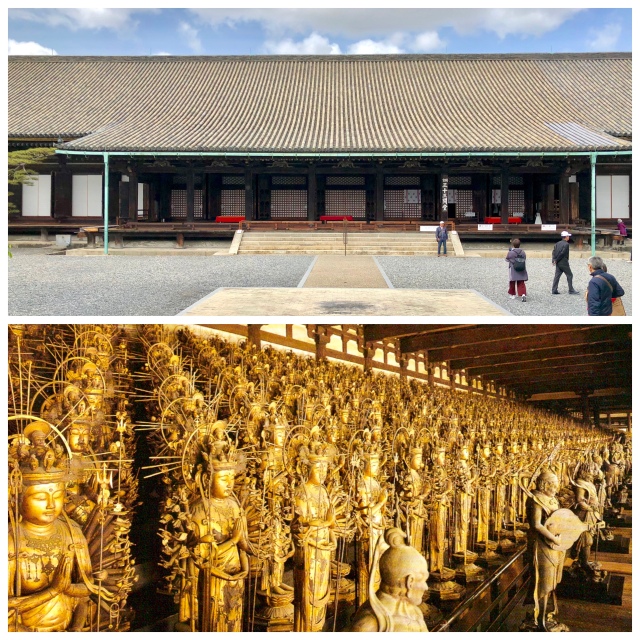 Leaving the Sanjusangendo Temple, we walked further north to the Kiyomizu-dera, another Buddhist temple devoted to the goddess Kannon. Along the way, we passed a number of women in traditional kimono, apparently rented from one of the several shops along the route to Kiyomizu-dera for a “pilgrimage” to the temple.

The route took us up busy Matsubara-dori, a walking street lined with tourist shops and restaurants. It was far too crowded for my taste.

At the top of the walking street, we found the niōmon, the temple gate, from which see could see the 3-story pagoda poking up above an adjacent pavilion to the right.

We passed through the gate and ascended the steps to the pagoda and main hall, although we knew in advance that the main hall has was in the process of being rebuilt and was not really accessible.

From the pavilion adjacent to the pagoda, I turned and took a photo of the gate with Kyoto city in the distance.

We didn’t spend much time in Kiyomizu-dera Temple, itself, due to the construction and congestion. Returning the way we entered, we stopped to admire the costumes of some of the pilgrims. Actually, I don’t know if these folks were on a pilgrimage, although there is a 33-temple pilgrimage for followers of Kannon; for all I know, they just like to dress up in geisha costume for a day out.

From Kiyomizu-dera, we continued our walk over to the Gion Hanamachi, the “flower streets” of the Gion District, known for its geisha and tea houses. Long ago, I read “Memoirs of a Geisha,” by Arthur Golden; much of it takes place here in the Gion Hanamachi.

As we were walking down Hanamikoji-dori, “flower viewing lane,” a crowd was milling about in front of a closed-door establishment. We stopped and waited. After a few minutes, the door slid open and out walked a real geisha! We were lucky to see this. It’s unusual to spot geisha during the day, even in the Hanamachi.

Actually, this Geisha was a maiko, an apprentice. Two things give her away (according to the description in Wikipedia): the shoes (full geisha wear wooden sandals) and the red in her collar (full geisha have white collars).

There’s a common misimpression that geisha are high-class prostitutes. Apparently, that’s not the case. According to Encyclopedia Britannica, they are cultured women entertainers, skilled in dance, music and the arts.

Who am I to argue? But someone needs to have a talk with Arthur Golden.