Two days in Kyoto visiting congested shrines and temples was enough to make us anxious to get out of the big city for a day. So on Tuesday, we got up early and took the train to the northwestern outskirts of Kyoto for a day outdoors.

From the JR Saga-Arashiyama Station, we walked west through town to the Arashiyama bamboo forest, a 1/2 km walk through incredibly tall bamboo.

We had some pretty tall stands of bamboo at our house in the Keys, but nothing like these. 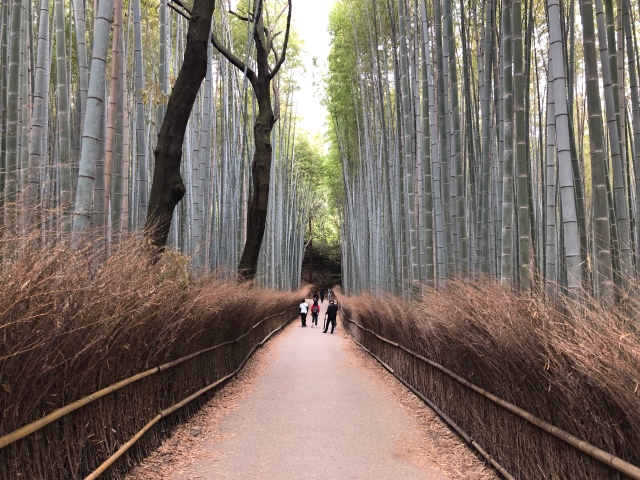 Some of the larger stalks must have been over a foot in circumference.

We walked the length of the forest, then turned around and retraced our steps to the station.

We had tickets on the “Kyoto Sagano Romantic Train” to Kameoka which was leaving from the Saga-Torokko train station adjacent to the JR Saga-Arashiyama Station. The Sagano railroad between Arashiyama and Kameoka is a single, narrow-gauge track laid in 1889 to haul freight between Kyoto and the port city of Maizuru to the north. 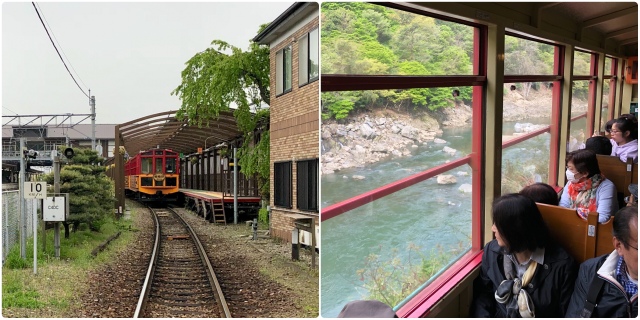 We had planned for our return to trip to be by boat on the adjacent Hozu-gawa River, but the river looked too low for any boat to navigate.

As you can see, there were plenty of rapids and shoals spanning the entire river: 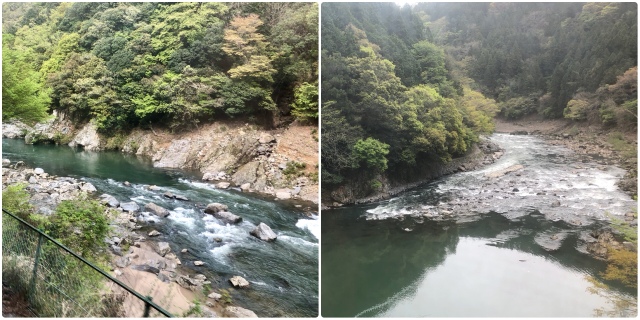 We got off the train at Kameoka and the bus to the Hozu-gawa River Boat Ride boarding site was sitting there in the parking lot, so we hopped on, figuring we’d go see if they were doing a shortened boat ride. Amazingly, it was the full ride that was operating, all the way back to Arishiyama, 16 km (about 10 miles) downriver – on the other side of those rapids and shoals!

The Hozu-gawa River was improved and opened for navigation in 1606, originally to float logs downstream to the then Imperial City of Kyoto. Later, rice, wheat, firewood and charcoal were also sent downstream by boat until 1895 when the railroad went into full operation, at which time the tourist boat rides began.

The boats that operate now are about 30 feet long, shallow-draft and flat-bottomed. They are manned by three crewmen who alternate positions: one steers using a long steering oar; another rows on the starboard side; and, the third poles and fends off with a long bamboo.

The boat holds 25 passengers, each paying about $40 (that’s $1,000 per boat). Almost all the other passengers on our boat were Japanese. We were seated at the very back of the boat so the pilot could occasionally point out things to us in broken English.

At the start of the trip, the river was quite calm, but if I had seen our pilot’s expression as we cast off, I might have guessed what was ahead: 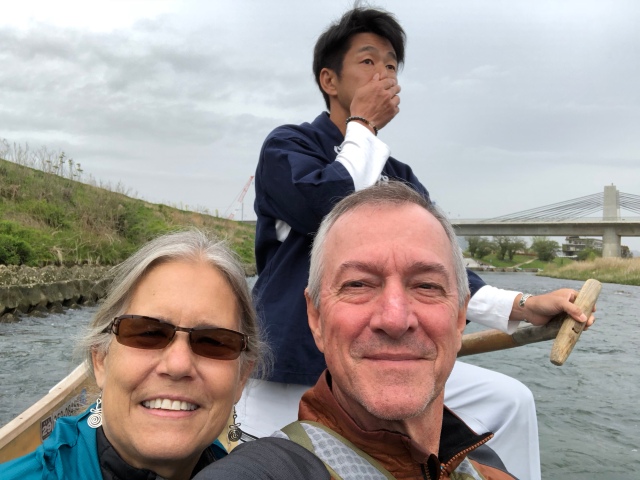 The calm waters soon began to roil as we skipped over a few minor rapids, passengers laughing and hooting.

The entire boat ride was supposed to be 2 hours long and after just 15 minutes we hit our first big challenge, a 6-foot drop over a shallow and fast-running rapid.

Not long after, the crewmen all changed position, then came more rapids, the laughter turning to exclamations of concern.

It was a fun ride. Toward the end, in calm water again, a concession boat pulled up and rafted alongside. Leaving them, the crew poled and rowed us to our disembarkation point at Arashiyama.

It was an all-around fun day.