We left Kyoto on Friday for Hiroshima, a port city near the southwestern end of Honshu, the largest of the four main islands that make up Japan. Hiroshima’s sister city in the United States is Honolulu, symbolically linking the beginning and end of the Pacific theater of World War II.

In Hiroshima city, we had a singular purpose: to visit the Hiroshima Peace Memorial Park, the infamous location of the first use of a nuclear bomb. The centerpiece of the Memorial Park is the Genbaku Dōmu, the “A-bomb Dome.” In 1967, the city of Hiroshima erected a monument in front of the A-bomb Dome. The plaque on the monument explains that:

The A-bomb Dome is the ruins of the former Hiroshima Prefecture Industrial Promotion Hall which was destroyed by the first atomic bomb ever to be used in the history of humankind on August 6, 1945. The atomic bomb was detonated in the air at an altitude of approximately 600 meters almost right over the hall. The explosion by a single bomb claimed the lives of over 200,000 people and the city area of about 2-km radius was turned into ashes. In order to have this tragic fact known to succeeding generations and to make it a lesson for humankind, the reinforcement work of the ruins has been done by the contributions of many people who desire peace within and out of the country. The ruins shall be preserved forever.

[Encyclopedia Britannica and Wikipedia both say that 70,000 people were killed by the blast and ensuing destruction and another 70,000 succumbed to radiation.]

The atomic bomb dropped on Hiroshima, dubbed “Little Boy” by the U.S. military, was a 15-kiloton, gun-assembly, nuclear-fission weapon containing a mere 2 lbs. of Uranium-235, a highly reactive radioactive isotope.

The damage such a weapon can cause is succinctly described by Encyclopedia Britannica:

Fission releases an enormous amount of energy relative to the material involved. When completely fissioned, 1 kg (2.2 pounds) of uranium-235 releases the energy equivalently produced by 17,000 tons, or 17 kilotons, of TNT. The detonation of an atomic bomb releases enormous amounts of thermal energy, or heat, achieving temperatures of several million degrees in the exploding bomb itself. This thermal energy creates a large fireball, the heat of which can ignite ground fires that can incinerate an entire small city. Convection currents created by the explosion suck dust and other ground materials up into the fireball, creating the characteristic mushroom-shaped cloud of an atomic explosion. The detonation also immediately produces a strong shock wave that propagates outward from the blast to distances of several miles, gradually losing its force along the way. Such a blast wave can destroy buildings for several miles from the location of the burst.

Large quantities of neutrons and gamma rays are also emitted; this lethal radiation decreases rapidly over 1.5 to 3 km (1 to 2 miles) from the burst. Materials vaporized in the fireball condense to fine particles, and this radioactive debris, referred to as fallout, is carried by the winds in the troposphere or stratosphere. The radioactive contaminants include such long-lived radioisotopes as strontium-90 and plutonium-239; even limited exposure to the fallout in the first few weeks after the explosion may be lethal, and any exposure increases the risk of developing cancer.

Here’s a view of the remains of the Industrial Promotion Hall from the direction of the blast, looking SE to NW:

Hiroshima was chosen as the target for a number of reasons: it was a major military base, the headquarters of the Japanese Second Army, and occupied by 40,000 Japanese soldiers; it was a major military port, used to dispatch troops in nearly every action; no American POWs were known to be there; the city’s location in a valley would maximize the effect of the blast; and, it was easily identifiable from the air.

Little Boy was dropped by the Enola Gay, a B-29 bomber, by visual sighting. The Aioi Bridge, from which I took the photo, below, has a unique T-shape at a fork in the Motoyasu River, thus providing the bombardier of the Enola Gay an easily identifiable target at nearly the exact spot I was standing. 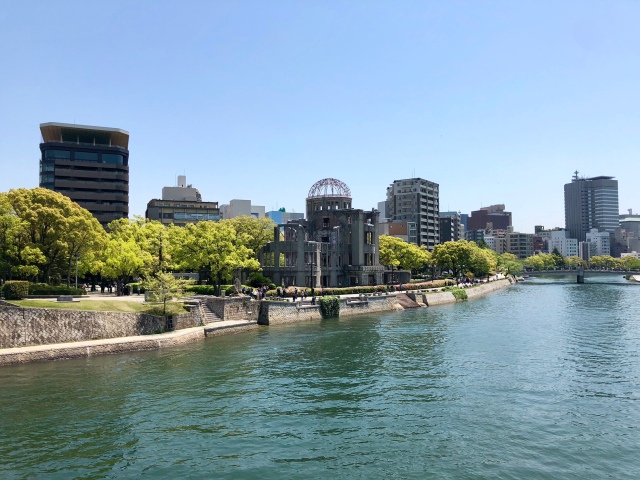 When the bomb was dropped, most of the buildings in Hiroshima were made of wood and were instantly incinerated. Besides the Industrial Promotion Hall, only portions of a few other earthquake-proof, reinforced-concrete buildings survived the blast. Its a testament to the Japanese people that Hiroshima has been rebuilt as such a vibrant, modern city (as you can see in the photos above and below) in a mere 70 years. 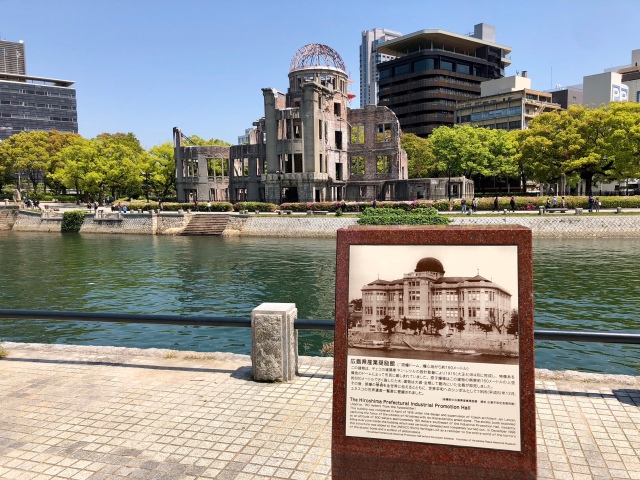 Besides the Dome, the Memorial Park also houses an eternal flame monument, a cenotaph and a museum. The flame is located just below the Japanese flag in the photo below, although it’s hard to see; the cenotaph (which recites the names of all the known victims of the bombing) is shown on the far left.

Barack Obama was the first sitting United States President to visit Hiroshima since the dropping of the bomb was authorized by President Harry S Truman in 1945.

My maternal grandfather idolized Truman; I never did. I suppose the difference is that his generation saw the dropping of the A-bomb as bringing a calamitous war to a close, whereas mine saw it as the beginning of a new one, the Cold War and the Nuclear Age.

But Truman’s decision was effective. Three days after Hiroshima, a second A-bomb, this time, a plutonium weapon, was dropped on Nagasaki with similar effect. The next day, Japan surrendered.

We visited the museum after ringing the Peace Bell and walking the grounds of the Memorial Park. It would not be possible to visit this museum and read the testimonials of survivors of the blast without mourning the sacrifice made of these innocent people.

Yet, the madness continues.

Ingenious as humans are, we have now created an even more powerful weapon of mass destruction than the atomic bomb. The thermonuclear hydrogen bomb, which operates by fusion rather than fission, can be thousands of times more powerful than the atomic bomb. In fact, thermonuclear bombs use atomic bombs as their triggers to create the extreme heat necessary to start a fusion reaction. The power of atomic bombs is measured in kilotons (thousands of tons); the power of hydrogen bombs is measured in megatons (millions of tons). Think about that.

In front of the Dome, we were approached by a Japanese woman and asked to sign a petition demanding the world’s governments destroy all nuclear weapons before it’s too late. Agreeing to sign that petition was one of the easiest decisions I’ve ever made.

One thought on “Hiroshima”