Besides the Hiroshima Peace Memorial Park, there wasn’t much in Hiroshima of interest to us, so on Saturday we went on an excursion to Itsukushima Island, a short train ride along the coast to the southwest. Itsukushima Island is popularly known as Miyajima, which translated means “Shrine Island.” We scooted over to the JR Ferry from the train to get over to the island.

Our plan was to reach the summit of Mount Misen, the highest point on Miyajima. That’s it on the right side of the saddle in the photo, below. The opposing peak is the location of the Shishiiwa Observatory and the terminus of the cable car and aerial tram that go there from the town below. [Note, also, the big building at water level on the left and the torii gate in the water just to the right of center; more on them later.] 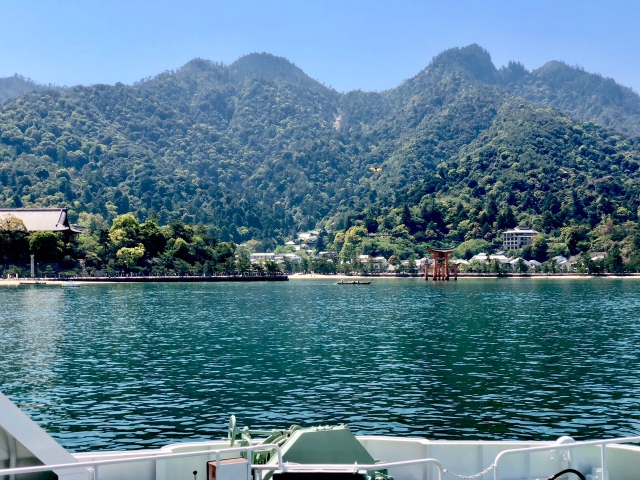 After disembarking, we walked briskly through town, using the 5-story pagoda as a landmark. The town was already busy with tourists, but they were mostly sticking to the waterfront and the shops, restaurants and tourist attractions there.

There are two hiking trails up Mt. Misen, but we opted for a third way, the Miyajima Ropeway, a combination gondola (the lower part) and aerial tramway (upper) with a transfer station about 4/5 of the way up to Shishiiwa Observatory on the top of a lesser peak.

From the Observatory, a trail heads down and across a saddle to the higher peak, Mt. Misen. There were a couple interesting rock formations along the way.

After hiking about 45 minutes, we neared the summit of Mount Misen at 1,750 feet above sea level.

From the observation platform at the summit we could see the ferry landing down below and, to the right, the starting point of our hike, the Shishiiwa Observatory.

On the hike back down, we stopped at the Reikado Hall which houses the eternal flame, said to have been burning here for over 1,200 years. This was the source for the lighting of the Hiroshima Peace Memorial Park’s Peace Flame mentioned in my last post. I took the photo, below, from the steps of a small Buddhist temple opposite Reikado Hall. 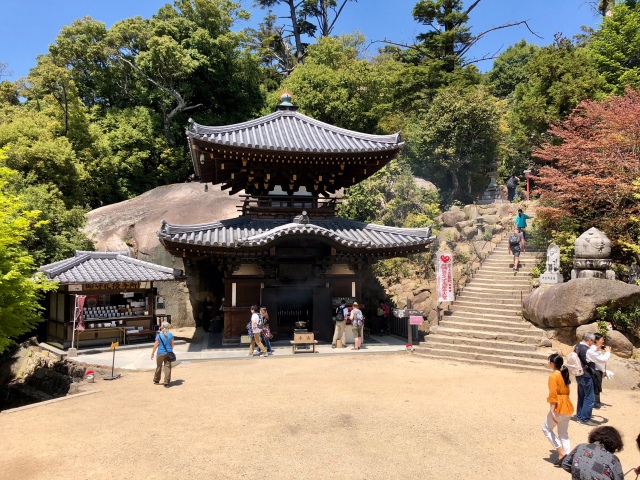 After resting for a few minutes on this warm, but pleasant, afternoon, we hiked back to the Shishiiwa Observatory and took the aerial tram and then the gondola back to town.

There’s a reason that Itsukushima Island has been nicknamed “Shrine Island.” In earlier days the island was considered to be sacred and commoners were not allowed to land on it. To accommodate pilgrims, a Shinto shrine – the Itsukushima Shrine – was constructed on pilings slightly offshore of the island, giving the appearance at high tide that the shrine is floating (bottom half of photo, below). Pilgrims arrived by boat through the Otorii, the Great Gate (top half), and were able to worship at the shrine without ever having to touch land.

Here’s a better photo of the Great Torii as a boatload of tourists approach it while the ferries pass behind. At low tide it’s possible to walk out to the Otorii, it’s made from rot-resistant camphor wood. 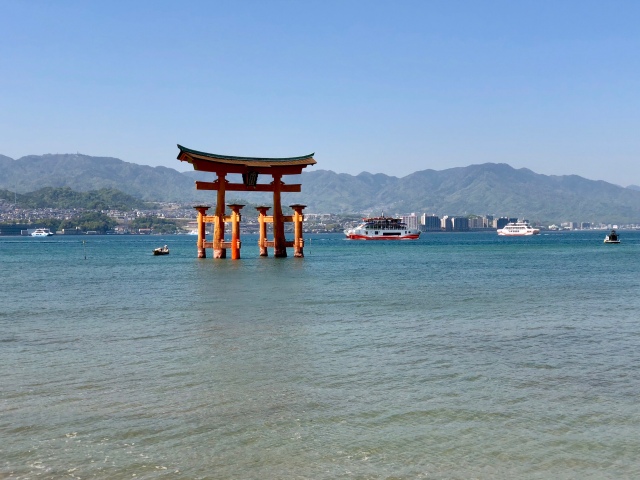 Next to the Itsukushima Shrine, up a flight of stairs, is the Toyokuni-jinja Shrine, home of the Senjō-kaku, the “Pavilion of 1,000 Tatami Mats,” originally intended to be a Buddhist library. The Senjō-kaku was never finished, due to the death of its sponsor, and during the Meiji Restoration it was converted into a Shinto Shrine. It’s also built on pilings, but on land, and there’s a path that goes underneath it to the pagoda at its rear.

The Goju-no-To 5-story pagoda makes up the balance of the Toyokuni-jinja Shrine. From here, we returned to the ferry landing, then made our way to the train station and back to Hiroshima.

First, in Hiroshima, we stayed at the APA Hotel Hiroshima-Ekimae Ohashi. While this hotel may be great for traveling Japanese businessmen, I do not recommend it for Americans. It has the smallest rooms I have ever seen in a hotel: the bed extends from wall to wall; and the bathroom is so small you can shower, shave and sh**, all at the same time.

Second, the food in Hiroshima is the best we had in Japan. In particular, the grilled oysters on Miyajima at Tori-I (left) and the Okonomiyaki at Yakunja in the Hiroshima Train Station (right), where they cook your food right in front of you – you can even eat off the griddle, if you want – were great!

Sunday we travel to Mishima on the bullet train. We’re almost at the end of our trip.