I’ve mentioned that gold was found near Dawson City at the confluence of the Yukon and Klondike Rivers in August 1896. But the world remained unaware of that discovery until a year later when groups of miners from the Klondike arrived in San Francisco and Seattle with over 2 tons of gold in the summer of 1897, kicking off the Klondike Gold Rush and the stampede to the North.

Many of the stampeders took steamers up the Inside Passage to Skagway and Dyea, the two small settlements at the end of the Lynn Canal. In 1897, there were only a handful of cabins here and recent arrivals set up tent camps. But within a year, towns had sprung up at both locations and two trails over the Coast Mountains were in full use by prospectors heading to the Klondike: the Chilkoot Trail from Dyea, a Tlingit Indian trading path; and, the White Pass Trail out of Skagway. The Chilkoot was the shorter route by 10 miles, but it was steeper and avalanche-prone.

By April of 1898, a couple of enterprising gentlemen had formed the White Pass & Yukon Railroad Company to build a narrow gauge railroad over White Pass from Skagway generally following the path of the White Pass Trail which their construction crews reached in the dead of winter, 1899. The railroad was completed on July 29, 1900, when the crew from Skagway met the crew from Whitehorse at Carcross in the Yukon Territory. But by then, the gold rush was over.

The railroad became a successful commercial venture, nevertheless, hauling ore and concentrates back to Skagway from the gold and copper mines to the north and during WWII, it was the chief supplier of the U.S. Army’s Alaska Highway project. The railroad switched from steam to diesel locomotives in 1954 and continued in operation hauling ore until world metal prices collapsed in 1982, ultimately closing as a commercial venture in 1986.

But the White Pass & Yukon Railroad began its second life in 1988 as a tourist railroad running between Skagway and White Pass Summit, later extended to Carcross. On Wednesday, we took a day trip on the railroad up to the the summit. 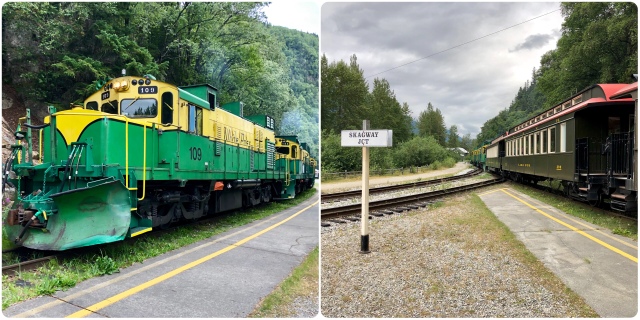 As we ascended, we could see the U.S. border station that we had driven through the day before across the Skagway River on the opposite slope.

As we rounded a bend further up the river valley, the conductor pointed out the rickety old bridge we were to cross, high up on the other side. You can just make it out in the center of the photo, below, about 1/3 of the way down from the top.

Some of the passengers were excited by the prospect. Others, not so much. 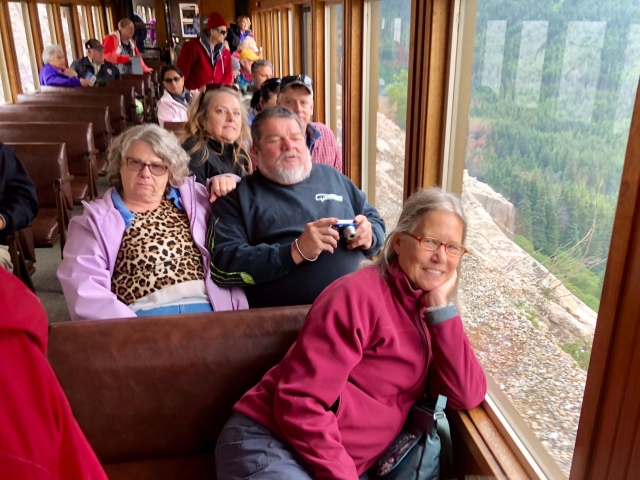 But everyone was paying attention as we rose higher and higher up the ascending grade.

At the far end of the bridge was the first tunnel.

The track had been cut into the mountainside and at times the drop off out the window was nearly vertical. I stepped out onto the platform between cars to take this picture, looking back at where we had been: 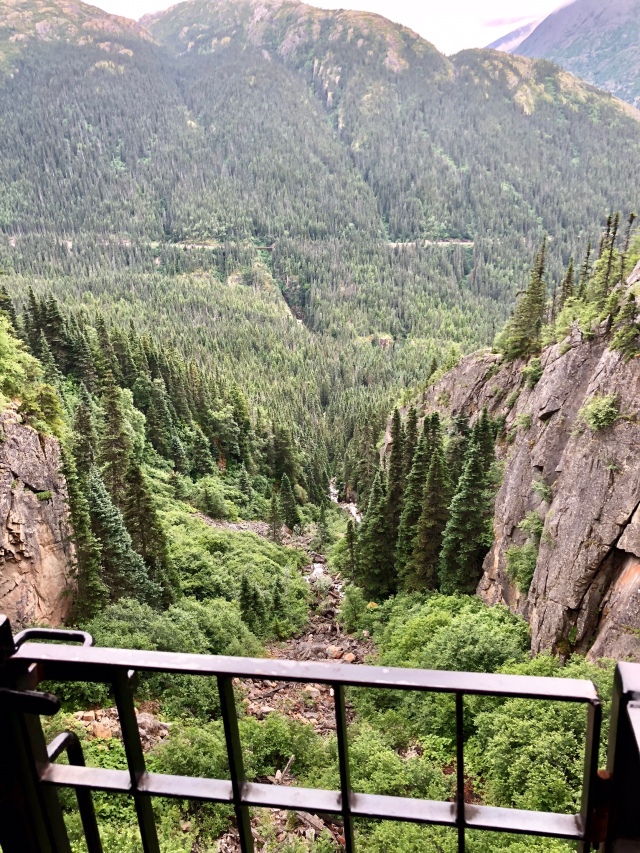 Then, nearing the top, we saw a crossing that left everyone breathless. What!? We’re going over THAT!!

Fortunately, no. It has been long out of use, closed in 1969, but when the “Steel Bridge” was built in 1901, it had been considered an engineering marvel, the tallest cantilever bridge in the world. 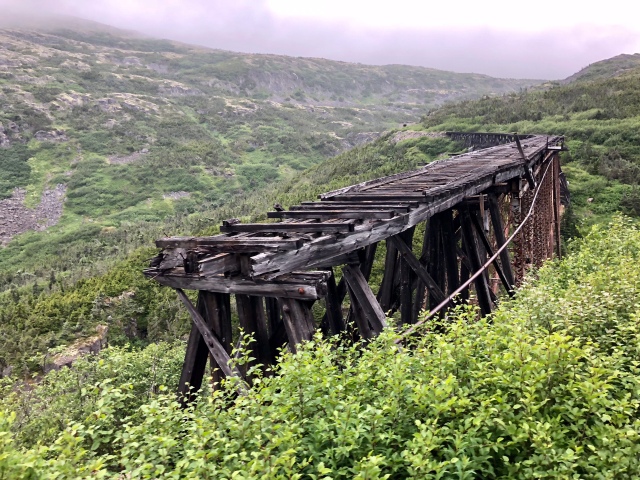 Here’s a view looking back at the Steel Bridge. You can see the track we had taken, just to the left. 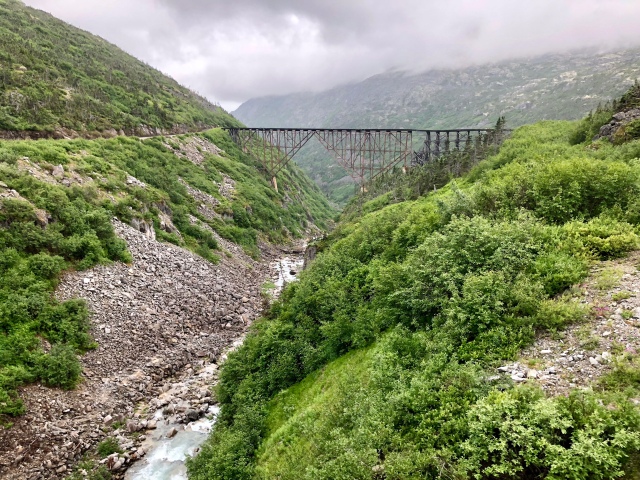 From the same place, I turned right and took this photo, showing the bridge we actually did cross, just before entering our second tunnel.

Finally, White Pass and Summit Lake, elevation 2,885 feet, a little over 20 miles from Skagway. Here the train stopped and the engines were uncoupled. They moved ahead onto a siding, as you can see below,… 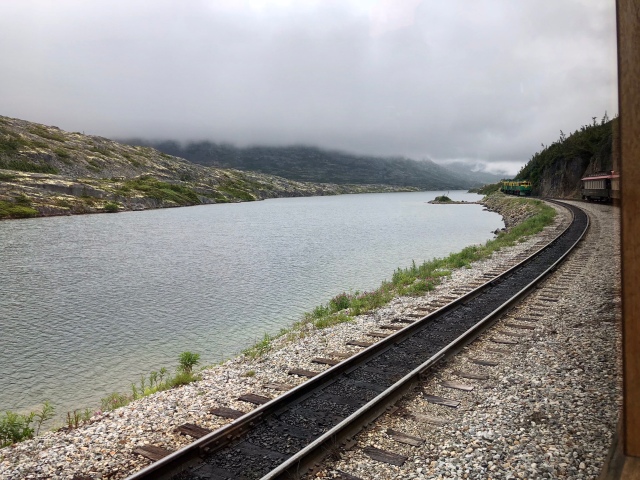 … then reversed course and hooked up to the rear of the train. We all flipped our bench backs around, switched sides and took our seats facing downhill for the journey back to Skagway.

Back in Gold Rush days, the Canadian government had set up a Royal Mounted Police post at Summit Lake to monitor the stampeders. It is still more or less intact, though unoccupied, but I turned my camera toward this scene at the summit, instead: the international boundary post and the countries’ flags. 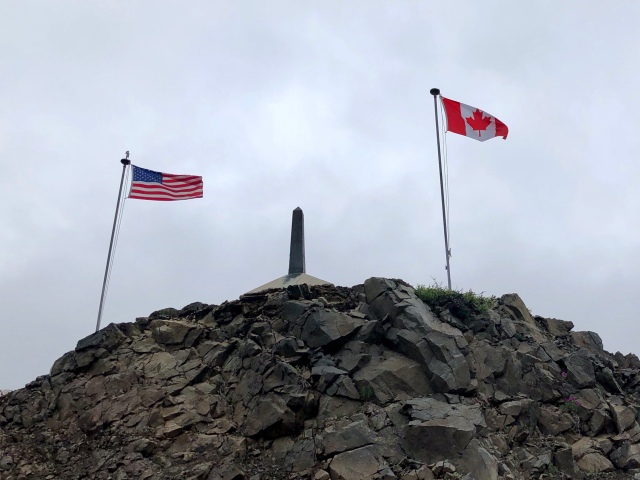 The train ride started out a little Disney-esque, but it was well worth the 4 hours up to the summit and back. I am apparently not alone in this view. It has recently been announced that Carnival Cruise Lines is buying the White Pass & Yukon Railroad this month for $290 million! Somebody finally struck gold in Skagway!