After lunch, we grabbed our daypacks and headed down to the ranger’s station to meet our guide for a hike out onto the Root Glacier, some 2.5 miles distant. The trail to the toe of the glacier proceeds first through the old Kennecott Mill, then makes its way along the lower slope of Bonanza Ridge, the location of the copper mines that used to feed the mill. About halfway to the glacier, we were adopted by an adventurous Golden/Lab Retriever that stayed with us all the way to the ice.

While Dale made friends with the new addition to our hiking party, I took the photo below of the terminus of Kennicott Glacier, a now immobile, slowly-melting body of ice covered by a supraglacial surface moraine of boulders, rock, gravel, sand, silt and “rock flour” that many mistake for tailings from the Kennecott mine. In fact, below all that till is the same white and blue ice that we could see up ahead, but here overlain with a purely natural mantle.

After crossing Jumbo Creek, the trail descended down the lateral moraine formed by this river of ice to the toe of Root Glacier and its collision with the much larger Kennicott Glacier to its west, the two being separated by Donaho Peak (elev. 6,696 feet), the dark mountain on the right of the photo, below. 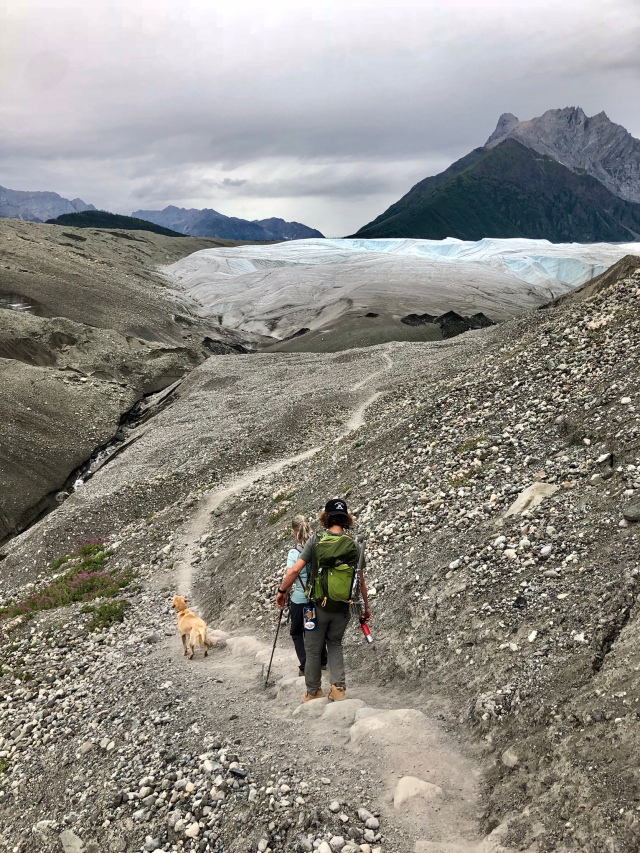 We stopped to put on our crampons and jackets where the moraine met the ice. Well, at least Dale and I did. Our guide, John, an engaging, recently relocated, young Texan who had just turned 20, didn’t wear any. He did, however, pack an ice axe (that remained unused) and bear spray that he carried all the way to the ice. An energetic young adventurer, still finding his way in this new and foreign terrain.

Before moving on to our trek on the glacier, let me clarify something you might have noticed in this and my prior post: the glacier and river were named in 1899 in honor of a prior explorer, Robert Kennicott, but everything relating to the mill and mining town is spelled “Kennecott” due to a clerical error in the early days of the mine when the Kennecott Mines Company was formed.

All suited up, we made our way up onto the ice. 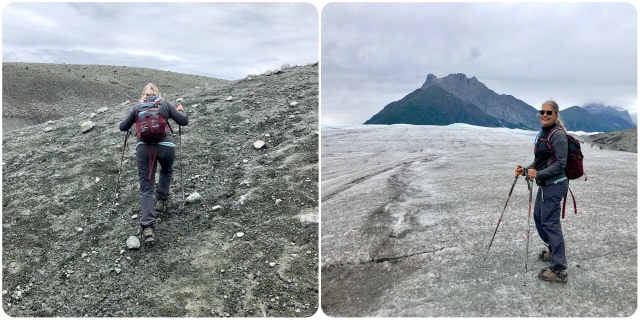 Here’s a Fun Fact for you: approximately 25% (5,000 square miles) of the surface of the Wrangell-St.Elias NP is glacier – nearly 60% of all the glacier ice in the state of Alaska!

As we trekked along the ice, it was difficult at times to tell liquid from solid:

We continued our hike upward.

Just out of the picture to the right in the photo, below, was a group practicing ice climbing.

John pointed out a moulin, a vertical shaft in the ice through which surface meltwater drains.

Here we are, intrepid ice explorers with Root Glacier’s Stairway Icefall in the background: 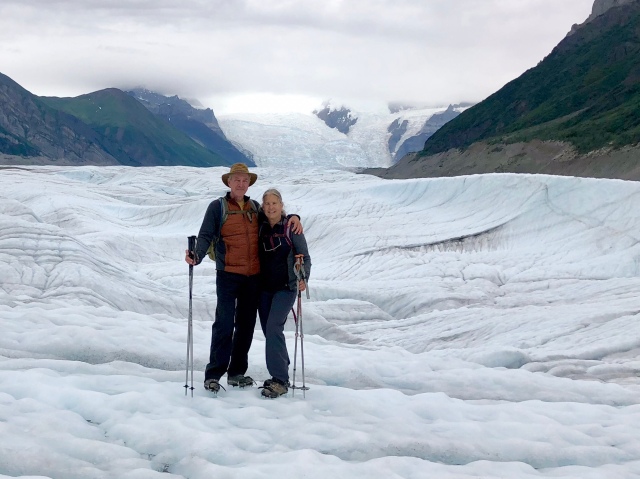 After wandering around on the ice for about an hour, we returned to the lodge for something warm to drink before dinner. It was considerably colder on the ice than it was on the ground.

Topping a rise marked by a trailside cairn, I stopped to take one last photo looking back at Root Glacier and Donaho Peak.

As we hiked back to Kennecott town, I saw before me what is so succinctly described by Cathy Connor in her book, Roadside Geology of Alaska:

Rivers of ice, or glaciers, form as snow is transformed into ice under pressure. The glacier ice moves downslope by sliding over the meltwater at its base, as well as moving along shear zones within the ice layers. Ice scouring, rock plucking, and mass wasting of debris onto the glacier surface erodes the former stream valley deeply, forming a distinctive U-shaped valley. Down valley, sediment and meltwater exit the glacier terminus. When there is an overabundance of sediment versus flowing meltwater, the down-glacier outwash river creates braided streams with many little islands that shift frequently with the changing flow of water. If the glacier ends in a lake, then the sediments are trapped in the lake basin, and the lake’s outlet river generally scours the lower valley, creating a meandering stream.

Tomorrow we will be kayaking in that glacial meltwater lake at the toe of the Kennicott Glacier, the blue circle I’ve drawn on the map, below (the blue line on the right is the route of our hike today). 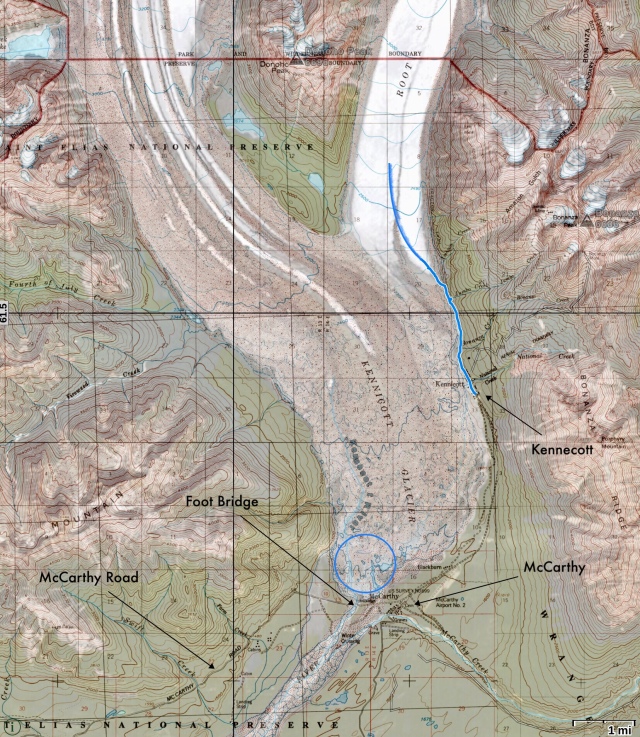