The morning of our second day in Kennecott, we went down to McCarthy to be fitted for drysuits we would wear kayaking in the meltwater lake at the toe of the Kennicott Glacier. Suited up, we climbed into the company van, then were shuttled to the launch site upstream of the pedestrian bridge over the headwaters of the Kennicott River. At the lake above the bridge, where Emily, our guide for the day, had already set up the kayaks, we were shown how to burp the air out of our dry suits once all the cuffs had been secured. Then off we went in our inflatable kayaks.

Dale and I each prefer the freedom of individual boats, so Emily took the double kayak. Paddling out from our launch site, we unexpectedly passed a Hobie catamaran tethered to shore. Unsurprisingly, it looked like it hadn’t been used in a while. I can’t think of a more inappropriate boat to have in a glacial lake.

Paddling from shore, we quickly reached the icebergs and growlers on the far side of the lake. The term “iceberg” refers to chunks of floating ice that are larger than 5 meters across, approximately 16 feet; floating ice smaller than that is called a “growler.” This one, by my count, is an iceberg:

The closer we paddled toward the toe of the glacier, the larger the bergs and growlers became. We nudged our kayaks against several of the smaller growlers, but they would not budge an inch, the visible surface being just a fraction of the growler’s entire mass, mostly hidden below the surface.

There were all sorts of nooks and crannies to explore. 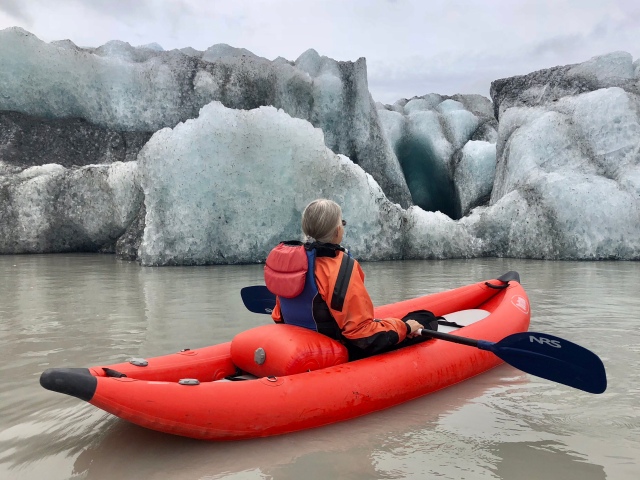 Glaciers form in areas of high winter snowfall and cold summers. This combination ensures that the snow that accumulates in winter is not lost in summer. When snow lasts through a summer melt season, it forms a denser layer called firn. The pressure of additional snowfalls compacts the underlying snow and firn, ultimately compressing them into a thickened mass of ice. As the years pass and the pressure of the additional snow increases, the ice crystals grow, compressing the air that is captured between crystals into bubbles in the ice.

Icebergs and growlers are typically formed when glaciers calve, that is, when pieces along the toe or face of the glacier break off. Able to see a cross-section of the glacier in a calved growler (below, top left) helped me better understand the veneer of surface moraine that we could see from the lodge on top of the terminus of the glacier when we arrived.

Due to the air trapped in glacial ice, the density of calved bergs and growlers is about half that of pure ice, causing them to float. As bergs and growlers melt, they release heat which causes the ice to revert to firn. You can see the difference by comparing the photo of ice (below, top right) to that of firn in a growler that is melting (bottom).

We paddled into what looked like a small cove, only to find that it was actually a pond set on the top of an iceberg. We “beached” our kayaks and walked about on the berg. There was no movement underfoot; it felt like we were on land. I would have never guessed that we were on floating ice!

Back in our boats, we admired the varying striations in the till and ice in some of the bergs… 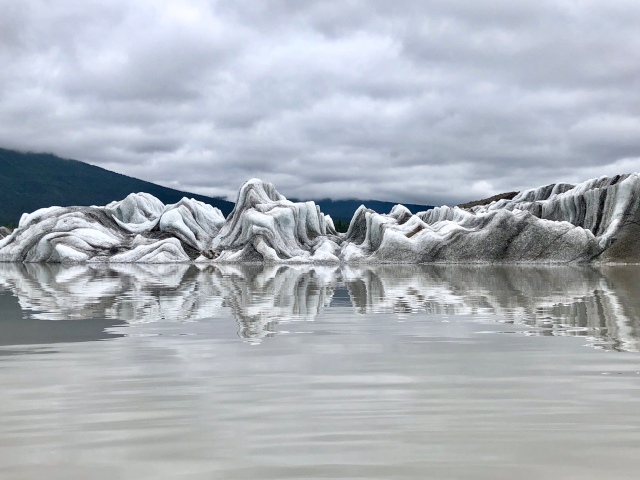 … and the incredibly deep blues in others.

This one looked like it had tumbled facedown off the toe of the glacier, but the more I studied it, the less sure I was of its original orientation. 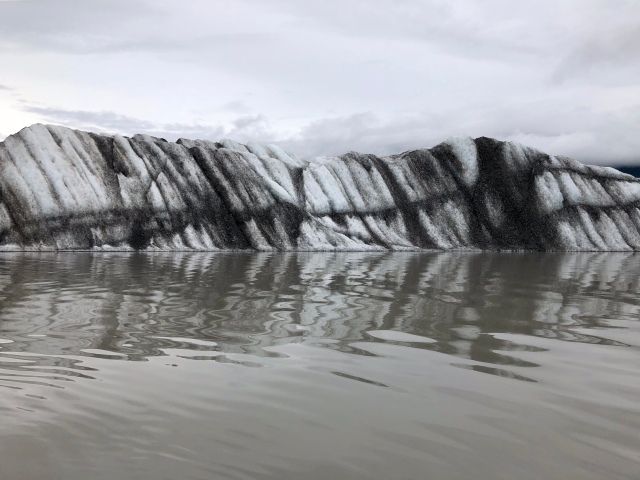 It was a truly amazing experience being the garnish floating in God’s cocktail.

2 thoughts on “Growlers and Icebergs”