Simultaneously with the construction of the Copper River & Northwestern Railroad, mines were being dug high up on Bonanza Ridge, together with a tramway to bring the excavated ore down from the mine openings at 6,600 feet to a more accessible 2,200 foot elevation where a bunkhouse, sawmill, blacksmith shop, storehouse and office had been built by 1908. This was a full 2 years before the railroad construction coming up from the port at Cordova had reached the major obstacle of the Kuskulana River.

All of this had been the doing of Stephen Birch, a young mining engineer, who realized early on the significance of the claims staked on the ridge in 1900 by the original prospectors and had acquired them, litigated their validity, and found financiers in New York to exploit the magnificent copper ore deposits high above the Kennicott Glacier.

Over the next couple years, and just in time to become a major supplier of copper to the war effort then underway in America, Birch’s Kennecott Mines Company had joined up with the Alaska Syndicate of JP Morgan and the Guggenheims and added a concentrating mill and experimental leaching facility, more bunkhouses at the mill and at the mines, a hospital, a water- and steam-driven power plant and an assay office. In 1915, the venture incorporated as the Kennecott Copper Corporation.

As stated in the NPS’s 1986 application to designate the entire area as an Historic National Landmark,

During the two decade period divided by World War I, when the United States produced more than half the world’s copper, the mines at Kennecott, Alaska, were among the nation’s largest, and contained the last of the great high grade copper ore deposits discovered in the American West. Just as mining technology was gearing up to exploit the low-grade ores that remained in the West, the Kennecott mines exposed an ore body unequaled anywhere in the twentieth century.

Although much of the early ore was of such high grade (70% pure) that it could be pulverized, bagged and shipped directly to the Alaska Syndicate’s smelters in Tacoma, Washington, without otherwise being processed, Birch knew the real profits were to be made by maximizing the concentration of copper so that no money or effort was lost shipping the unusable waste rock from which the copper was extracted. To deal with this issue, a 14-story concentration mill was constructed at Kennecott up the mountainside so that gravity could be used to facilitate the milling processes.

Just up the road from the Kennicott Glacier Lodge where we’re staying sits the concentration mill. In the foreground, below, is the CR&NW Railroad depot that directed the train into the loading shed with the open door that sits below the mill.

After our glacial lake kayaking adventure, we hiked up to the top of the concentration mill for a tour of the facility (the mill is only accessible via the tour). We entered below the tram cable that brought ore buckets down from the Bonanza Mine, one of five feeder mines on Bonanza Ridge. In years past, the entire structure you see in the photo, below, was roofed.

We walked through the ore offloading zone back into the area where the initial, rough rock crushing took place. It felt like we were on top of the world, but we feared that the entire structure under our feet could collapse at any moment.

Looking down from the top at the railroad depot building sitting at the far end of the bridge, below, we could just make out the lake we kayaked in earlier in the day (top right of the photo, below). The big red building on the road is the company store with one of the bunkhouses behind it that housed 80 mill and rail workers (all of the buildings were painted red, with the exception of the hospital which was white). The pile of debris in front of the company store is the remains of the sawmill, the only building that had been built from spruce, the local timber, which being prone to twisting and splitting turned out to be an unsuitable building material; all the other buildings were built of Douglas Fir shipped in from Washington State. 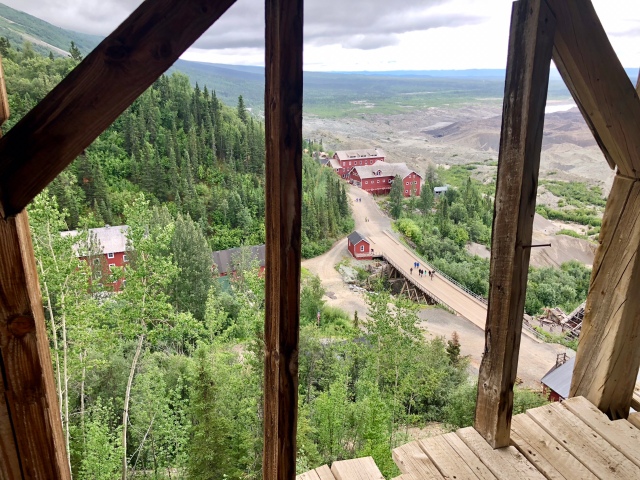 Looking out the other side to the northwest with Kennicott Glacier as a backdrop, we could see the shop and maintenance building in the foreground and the power plant with its smokestacks next to it. Various cottages and outbuildings were scattered up the road which, back in the day, wound its way as a wagon trail all the way up past Root Glacier to the Erie Mine.

Entering the ore processing part of the concentration mill, I felt as if I had been transported onto the game-board of Chutes & Ladders, or possibly, Mousetrap! 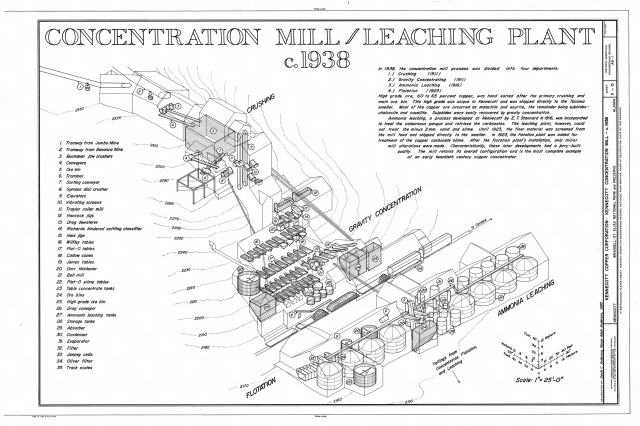 There were conveyor belts, ore chutes, ladders and elevators going in every direction. The noise, clatter and vibration must have been nearly unbearable when this facility was in operation, which was essentially 24 hours a day, 7 days a week and 363 days a year, closing only for Christmas Day and the Fourth of July.

This is the first rock crushing machine the ore is dropped into, a Buchanan Jaw Crusher. Great name. 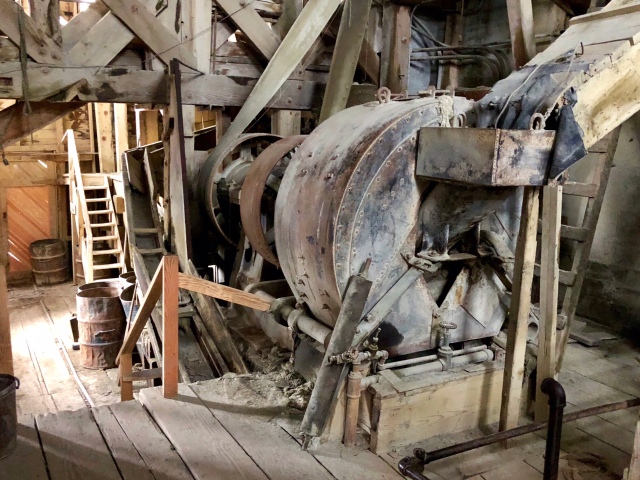 All of the machinery was powered by giant belts attached to just a handful of powerful electric motors, all but one of which have since disappeared, taken by scavengers.

We walked down a long stairway, adjacent to an elevator that lifts stored ore up to the top level to be crushed and sifted, before it ultimately finds its way back down to the various shaking tables that concentrate and separate the copper from other rock, pebbles and fines before it is scooped up, bagged, and slid down yet another chute to be loaded onto train cars, bound for the coast. 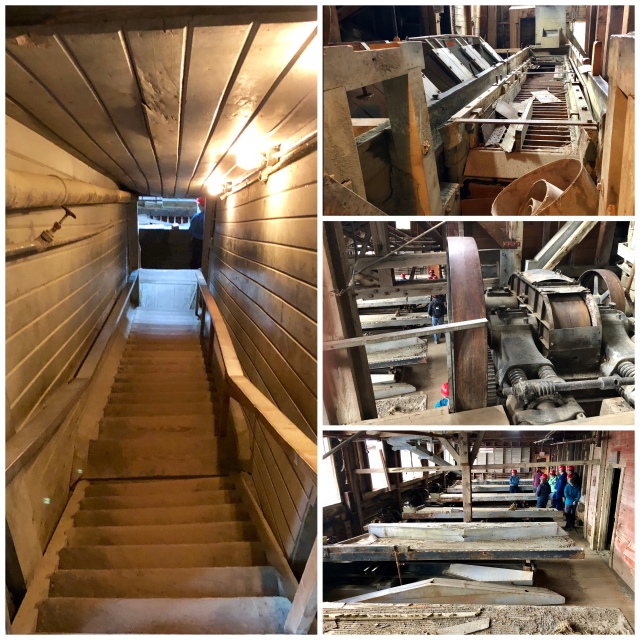 Looking back up at the mill from the road adjacent to the train loading area felt like being an extra in a horror movie. I expected the Ghostbuster crew to appear at any moment.

Across the road from the concentration mill is the leaching plant, used in later years of operation to further concentrate the copper ore by dissolving the crushed fine ore with ammonia and boiling it, thereby distilling the raw copper out of the solution (photo, below, top left).

From the leaching plant, we were shown the original water turbine electric generator that powered the first operations in 1908 (below, top right), then we walked through the boiler room in the power plant to see the original steam heat generating equipment (bottom). The diesel generators have been removed.

It was a real Rube Goldberg operation, growing and evolving as the needs and conditions required. But it all worked and was enormously profitable, employing in a typical year as many as 600 men in the mines and the mill (the miners lived in barracks at the mine heads). Ultimately, the ore ran out and in 1938, the last train left Kennecott, supposedly with only 24-hour notice to the workers there, and the mines and mill closed.

The NPS acquired the property in 1998 and made it part of the Wrangell-St.Elias National Park. I, for one, am glad they did.

Oh, I almost forgot: I solved the mystery of the Nabesna Gold Mine. A park ranger here at Kennecott said she thought Nabesna was never developed for tourism because it is still in private ownership. I checked, starting with the 1978 application for Historic Designation filed by the NPS. It did say that the mine was in private ownership as of 1978, the Ptarmigan Company. A name search of Alaska case law disclosed an opinion adjudicating a dispute between the owner of the Nabesna Mine and an investor, the owner of the adjacent Rambler Mine, that apparently went on for years, into the late 1990s, thus discouraging development of the site.