Locals joke that the best thing about Anchorage is that it’s only 30 minutes from Alaska. My source: Tip of the Iceberg, by Mark Adams, a recently published Alaska travelogue I highly recommend, especially if you’re a fan of Bill Bryson, as I am.

Given that Chugach State Park is an easy half hour drive east out of Anchorage, this quip is literally true. But, the meaning it conveys is that Anchorage is as much typically Alaskan as New York City is typically American.

We left Homer on Thursday morning and drove north and east on the Stirling Highway, then north and west around Turnagain Arm on the Seward Highway, arriving in Anchorage in the late afternoon. We checked into the Golden Nugget RV Park, one of the few campground options in Anchorage, planning to stay for several days (blue dot on the map, below). But, as soon as we were set up in our “campsite,” we knew that one day would be enough because, as the saying goes: Anchorage is not Alaska.

Approaching Anchorage from the east on the Seward Highway, I had the feeling that I could have been driving into any moderately large city anywhere in the continental United States, say, Orlando or Tacoma. We were immediately aware of having crossed over into the domain of tailgaters and congestion; of fast food restaurants and chain stores and big box retailers; and of suburbs running off toward the horizon in all directions.

Don’t get me wrong. I’m not saying Anchorage is a bad place; it’s not. In fact, for a city of its size, I’d rank it near the top. It’s just not what we came to Alaska to experience.

Anchorage came into being in 1914 when the mouth of Ship Creek was chosen as the construction port and headquarters for the new federal railroad that was to be constructed from where the private railroad had gone bust down on the Kenai Peninsula, north to the gold rush town of Fairbanks. A tent city soon formed at the anchorage in Knik Arm near Ship Creek while the town site was mapped out to the south where downtown is now located, essentially where the word “Anchorage” shows on the map, below:

Nearly every other Alaskan settlement was founded by people coming to the land to take things out: extraction industries, like mining or fishing. Not so for Anchorage which, since its founding, has served as an administrative and transit hub: first, for the railroad, as mentioned, above; then, in the 1940s, as a U.S. Army staging area for the Aleutian Campaign (Fort Richardson), and in the 1950s and ’60s as the Air Force command center (Elmendorf AFB) for forward air bases deployed during the Cold War with Russia, just 53 miles from Alaska across the Bering Strait.

Elmendorf Field was the second airfield of note to be constructed in Anchorage. The first airport in Anchorage was Merrill Field, built in 1929 and superceded in 1951 by Anchorage International Airport, currently the fifth busiest airport in the world for cargo traffic, after Hong Kong, Memphis, Shanghai and Incheon, in that order.

At a latitude of 61°N, Anchorage sits just north of Stockholm, Oslo, Helsinki and St. Petersburg, all places we’ve visited, and I can attest to their similar climate. Unlike those cities, however, Anchorage is blessed with a location that is almost equidistant from New York, Frankfurt, and Tokyo. Consequently, according to Wikipedia,

Anchorage is within 9.5 hours by air of nearly 90% of the industrialized world. For this reason, the Anchorage International Airport is a common refueling stop for many international cargo flights and is home to a major FedEx hub, which the company calls a “critical part” of its global network of services.

Just as importantly, Anchorage sits on the great circle air routes between Asia and the Continental United States.

On Friday, we drove around the north side of Anchorage International Airport and stopped along the waterfront where I took these photos (from the white arrow on the map, above) looking up the Knik Arm, then turning slightly to the right to zoom in on downtown Anchorage. 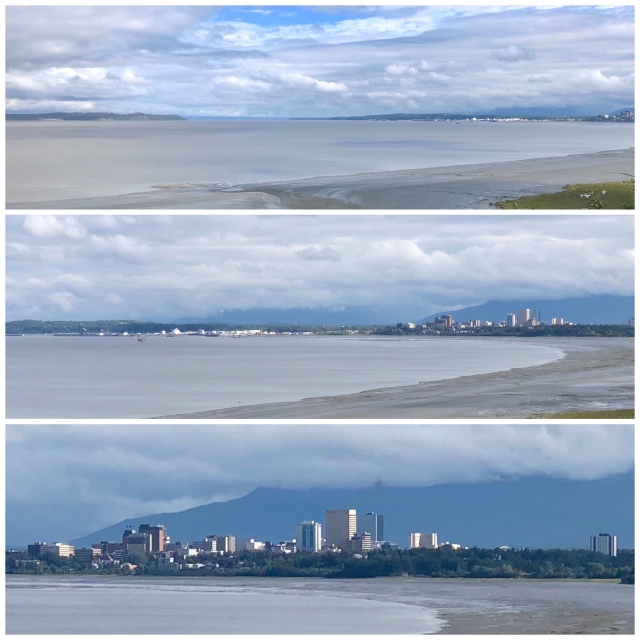 We spent a couple hours driving around town and doing “city” things: lunch at Taco Bell (a mistake), browsing in a book store and at REI, going to a movie at Regal Cinemas and grocery shopping, before returning to the RV.

To put into perspective just how big and dominant Anchorage is, take a look at the map, below. More than half of Alaska’s population lives in the Anchorage metro area! [Note: The city of Anchorage has a population of 300,000, the other 103,000 I’ve included live in the “Valley,” that is Mat-Su which is mainly the agricultural towns and suburbs of Palmer and Wasilla, but many people commute from there to Anchorage for work.]

While I was reading about Alaska’s population statistics and trends, I came upon the graph and map, below. I thought it was interesting to see graphically how Alaska’s population has been affected by the coming and going of the military and oil, as well as where Alaska’s inward migration from the Lower 48 has come from in recent years. I was not surprised to see Washington as #1 and the bulk of migrants coming from west of the Rockies, but I was surprised to see Texas as #3 and Florida as #5.

Back at the RV Park, I took this photo through the front window of our RV where our neighbors are mostly Alaskans (they do love their guns). Quite a contrast to the windshield vista we had on Homer Spit.

We left Anchorage early Saturday morning and drove north on the Glenn Highway to Palmer where the Alaska State Fair is underway. We decided that Palmer would be a better base from which to explore South Central Alaska.