Palmer is the borough seat of Matanuska-Susitna, the third largest borough in Alaska by population count, after Anchorage and Fairbanks (Alaska has 20 boroughs, called counties in most states).

We arrived in Palmer early Saturday morning, August 25, after calling ahead to the Alaska Paradise RV Park, a brand new campground in Palmer’s farm country, to make sure there was space available since the Alaska State Fair had just started less than two miles away.

Saturday was a beautiful day, so we got the RV set up quickly and then decided to walk to the Fair. We headed north out of the campground, the Talkeetna Mountains off in the distance (top photo, below), then turned west, stopping just past the corner so I could take a picture looking back south at our campground, this time, the Chugach Mountains in the background (you can see the RVs to the right in the bottom photo):

Palmer has a very interesting history. It is one of the few places in Alaska that was settled (in 1935) as an agricultural community, one of over 100 “rehabilitation colonies” established by the federal government as part of the New Deal during the Great Depression. I will tell this story in my next post. I briefly mention it here because the “Matanuska Colony” established at Palmer organized and hosted the first state-wide fair in Alaska in early September 1936 at what is today the borough building, originally Palmer’s first schoolhouse and community center.

With the exception of a 5-year hiatus during WWII (1942 to 1946), the fair has been held every year since its inaugural and in 1956 the Alaska legislature designated the fair at Palmer as the official Alaska State Fair. It was moved to its present location, a 300-acre site on the Glenn Highway in Palmer, in 1967.

We made it over to the Fair just as it was opening on its first weekend day and it was very similar to the Northwest Washington State Fair held every year in Lynden, just north of our home in Bellingham, Washington.

We had fun wandering around watching kids be kids and, as always, we had to go into the main exhibition hall to see the farm animals. I thought it was interesting to see how the rabbits were all lined up in their cages as far as possible from the passing humans. The face painting and “Fair hair” artisans were great at this fair.

The reason that Palmer was selected by the federal government as one of its New Deal rehabilitation colonies was the belief that the Matanuska-Susitna Valley was prime agricultural land – and, for the most part it was and still is. The Valley is blessed with “young soil” rich in nutrients, mild temperatures that rarely reach 80°F, and summers with very long days, as many as 19 hours of sunlight.

The result of these factors is that cold weather root and leafy crops, like potatoes, carrots, rutabaga, lettuce, kale, cabbage, broccoli and peas, do very well here. Record setting well. In fact, one of the main events at the Alaska State Fair is the Giant Vegetable competition which in years past has exhibited a 138 pound cabbage, a 72 pound carrot, a 63 pound celery and a 20 pound cucumber!

The main Giant Vegetable competition is on September 3 and we will have already left Palmer, but on display the day we went to the Fair were 35 and 32 pound cabbages, a 22 pound turnip, a 34 pound rutabaga, and the biggest zucchinis I have ever seen (including a nearly 50 pound marrow).

After walking around the Fair and eating various Fair fare (like elephant ears and kettle corn), we made our way into the bleachers at the rodeo. We stayed for the whole thing, starting with the synchronized horseback riders and the barrel races, followed by the steer roping (the steer got the better of these cowboys)…

… and ending with the bull riding and this poor cowboy’s attempt to fly! 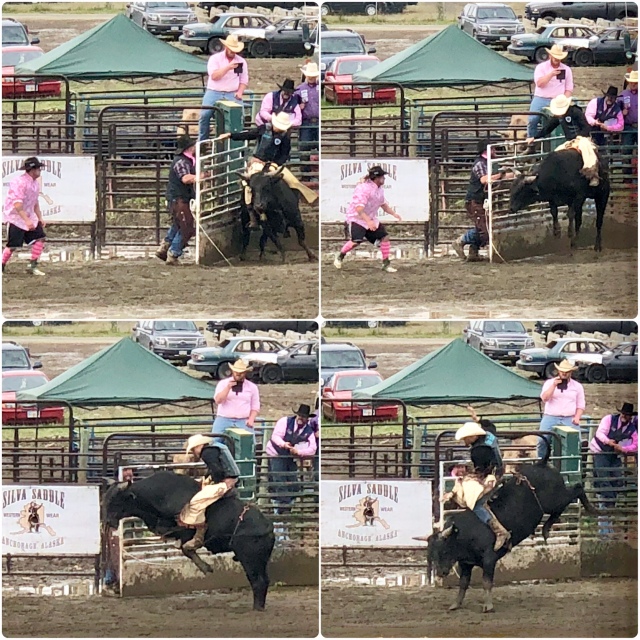 It was nearing dinner time – or at least Happy Hour – as the rodeo wound down, so we walked back to the RV and then went a little further down the road to the Bleeding Heart Brewery, a micro-brewery owned and operated out of the barn of a dairy farm by our campground owners’ son and his partner, Zack something-or-other, who was at the brewery when we arrived. It turned out that Zack is a local celebrity of sorts, one of the lead actors in a B-movie-made-for-TV comedy called Sudsy Slim Rides Again. 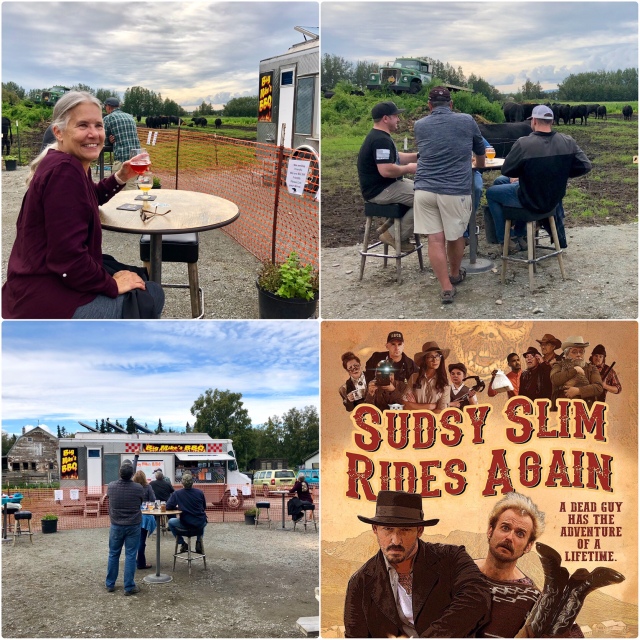 The movie was filmed locally, so I bought a copy and asked Zack to autograph it for me. He did, writing, “Drink More Beer!” I did, though not enough to make me fall off my horse. Or my barstool.

One thought on “Fair Weather in Palmer”