We stayed in Palmer for four nights, not as tourists, just taking time to be stationary for awhile. Palmer reminds me of our later-in-life home town, Bellingham, Washington – on the water, surrounded on three sides by mountains, with a functional, historic downtown and nearby farmsteads and micro-breweries. Though the Fair continued the entire time we were in town, we avoided the fairgrounds after spending all day Saturday there, but we did get out to see the rest of the Mat-Su Valley over the course of the next several days.

One day we drove up Palmer-Fishhook Road to the Independence Mine State Historical Park where we spent a couple hours exploring the old gold mine before driving the scenic Hatcher Pass Road to Willow, then returning to Palmer via Wasilla on AK-3, the Parks Highway, a total trip of about 75 miles. Both Willow and Wasilla are famous – or infamous – depending on which team you cheer for.

Willow was selected by referendum in 1976 to be the new capital city of Alaska in order to prevent the capital from otherwise being moved to Anchorage. But funding from the legislature never materialized, the program was ultimately scrapped and the capital remains in Juneau. Willow is also the start of the annual Iditarod Trail Sled Dog Race to Nome.

Wasilla’s claim to fame is that it is home to two celebrities. One is Sarah Palin, former mayor of Wasilla (1996-2002), governor of Alaska (2003, resigned 2004) and Republican Vice-Presidential running mate of Sen. John McCain in 2008. The other is Larry Csonka, former Miami Dolphins NFL Hall-of-Fame running back and a major reason the Dolphins had a perfect season (14-0) in 1972 and won back-to-back Super Bowls in 1972 and 1973. I was never much impressed by Sarah Palin as a public official. Like her, and at the same time (1999-2001), I was mayor of a small (but slightly larger) town, Miami Shores, Florida, but unlike her, I never abandoned my post to seek higher office, nor can I see Russia from Alaska. Larry Csonka, on the other hand, can run over 250-pound linebackers. Now, that is something way beyond my capabilities.

Another day, I drove east out of Palmer over the Matanuska River, then followed the Old Glenn Highway south and west in a loop along the edge of Chugach State Park, returning to Palmer on the (new) Glenn Highway, AK-1. It was a very scenic drive.

Before making that drive, I visited old downtown Palmer and stopped at the Colony House Museum, a relocated and restored Matanuska Colonist’s home, where I had a long talk with the resident docent and saw hanging on the wall the 1910 Map of Willow Creek Mining District, below, which covers pretty much the same area as the modern map, above.

In 1900, the only people in the Mat-Su Valley were the native Ahtna in the valley, the Dena’ina (or Tanaina) Indians living along the Chikaloon branch of the Matanuska River, and a handful of prospectors panning and digging for gold up in the adjacent Talkeetna Mountains, including one George W. Palmer who built a small trading post on the banks of the Matanuska where the town that now bears his name is located.

Also in those early years, explorers and homesteaders moved into the Valley, one of whom, a geologist, discovered a large seam of coal on the Chikaloon that was brought to the attention of the builders of the railroad then heading north the length of the Kenai Peninsula from Seward. Coal being the principal fuel powering its locomotives, the railroad made plans for a rail spur up the Matanuska to reach the coal field. Although the railroad went bankrupt, in 1914 it was taken over by the United States federal government which completed the project and set up a coal mining camp on the Chikaloon to extract the coal which was also the fuel used by the Navy’s warships; the rail spur to the coal was completed and in operation two years later.

By 1917, there was a rail depot and a small community of farmers and miners at Palmer and, encouraged by the success of the homesteaders’ farms, the federal government opened an experimental agricultural station nearby to explore the potential for further agricultural development of the Valley. Meanwhile, up in the Talkeetna Mountains, the prospectors had hit it big along Willow Creek near Hatcher Pass (the map, below, shows the prospectors’ claims in red).

We drove the Palmer-Fishhook Road, which climbs uphill alongside the Little Susitna River, on our way to see the remains of the largest and most productive gold mine of the Willow Creek Mining District, the Independence Mine, now a State Historical Park. 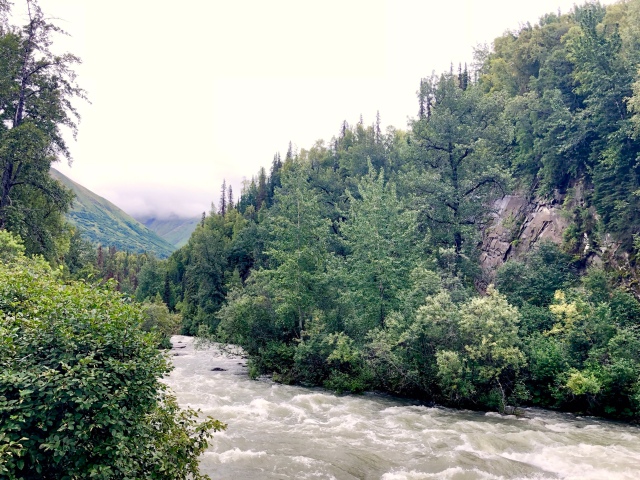 On the way up, we pulled over to admire the view of the Valley off in the distance. The Fireweed blossoms are all but gone now, announcing the coming of winter within six weeks.

The original prospectors here had panned for gold in Willow Creek, a process called placer mining, reclaiming small amounts of the precious metal. But, the real money was to be made by finding the “mother lode” from which those flecks of gold found in the stream beds had originated, deep in the quartz veins running through the solid-rock of the Talkeetna Mountains.

Underground mining commenced in 1908 and by 1936 operations had expanded at the Independence mine to include a mill, camp and mine that employed about 200 workers. The mine was temporarily shut down during WWII (1943-1946), then reopened for a few more years before permanently closing in 1951. It produced 181,000 ounces of gold in those 11 years which, at the $35 per ounce government-mandated price then in effect, was worth slightly more than $6 million (at today’s price of $1,200 per ounce, it would be worth about $215 million).

From the parking area, we could see the tailings from one of the mine tunnels running down the face of the peak behind the camp (top left in the photo, below). The State of Alaska has been restoring some of the buildings as funds to do so have been available, like the bunkhouse in the top right photo. Other buildings, like those in the two photos on the bottom, are beyond repair. 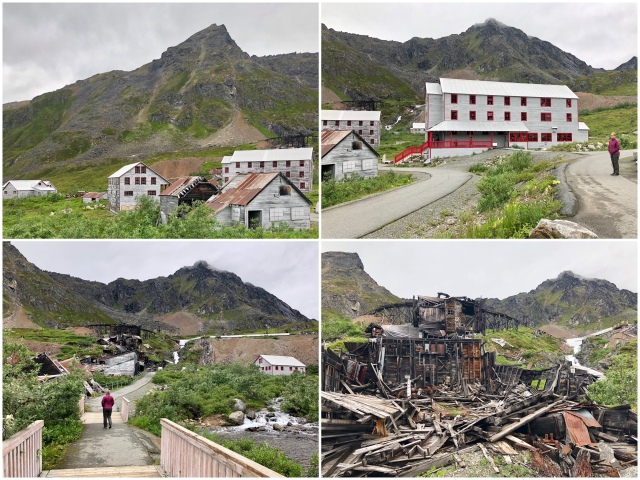 We realized as we hiked up and around the crumbling mill that the movie, Sudsy Slim Rides Again, starring Zack the beer-tender, was filmed here at Independence Mine. 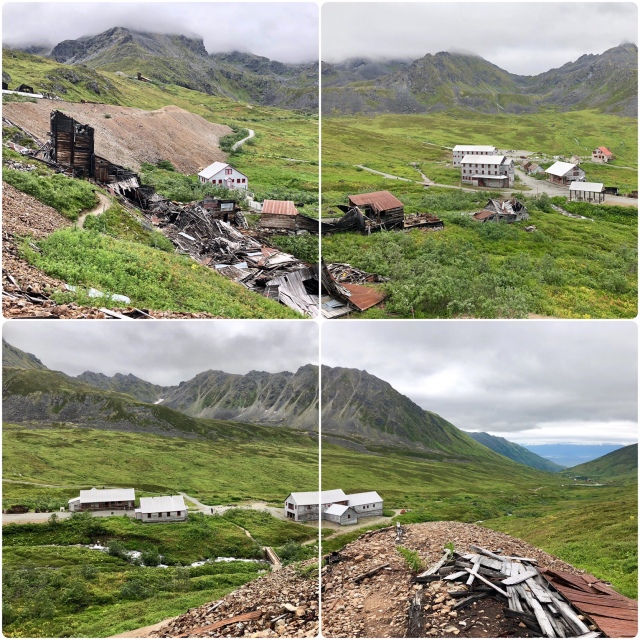 One of the scenes of that movie was shot in this restored mine entrance (photo, below, top left). When this was a working mine, down below the earth’s surface the miners would drill holes and fill them with dynamite charges that would be exploded to break the rock; an above-ground example appears in the top right photo, below. The mine carts would then be loaded by the “muckers,” who used electric-motor driven front-end-loaders (bottom left) to fill the cars that would then be transported out of the mine to the mill for crushing and processing. 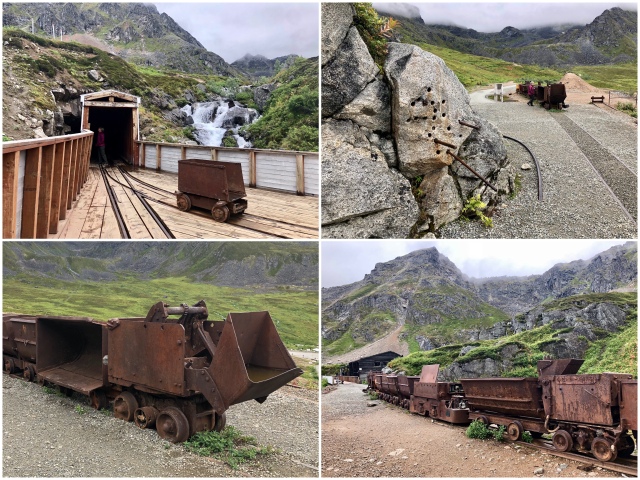 No mine cars will be running on these tracks any time soon, though. 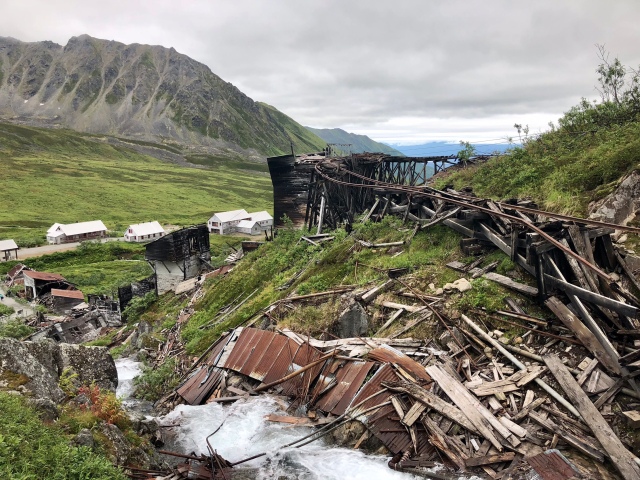 After leaving Independence Mine, we headed east on the Hatcher Pass Road, the first 15 miles of which is a winding, gravel road through the mountains. We stopped at Hatcher Pass (elev. 3,886 feet) for a little hike and to admire the views up the Willow Creek Valley… 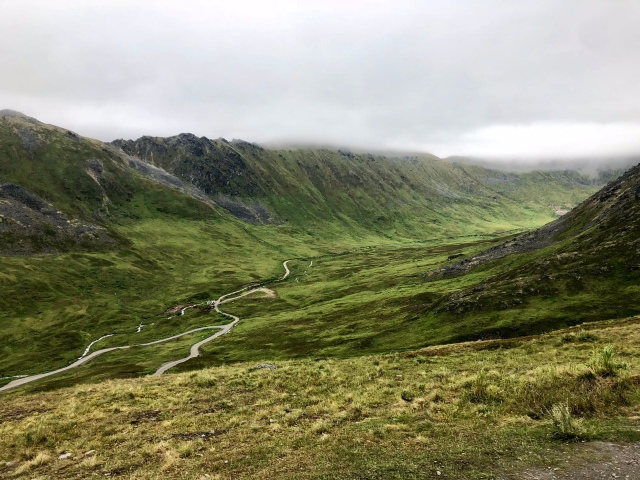 … and down into the Mat-Su Valley where we could see where our drive continued.

On October 29, 1929, the New York stock market crashed, ushering in the Great Depression of the 1930s. That didn’t phase mining here in Alaska, but it did put many people on the unemployment rolls down in the Lower 48.

One of the attempts made by the U.S. government to address the situation in the early 1930s was the New Deal Community Program by which the federal government ultimately relocated nearly 11,000 people into newly federally built industrial or agricultural communities scattered around the United States in over 100 different locations, one of which was Palmer in Alaska (others were in Madison and Okaloosa County, Florida, and in Longview, Washington, but that’s a story for another day). By the time it was over, the Program had cost the government $108 million, nearly $10,000 per family.

As I mentioned, Palmer had already been identified by the federal government as having agricultural potential, so in January 1935 the government offered down-and-out families in Michigan, Minnesota and Wisconsin free transportation to Alaska and 40 acres of land, a house, a barn, a well and an out-building for the bargain price of $3,000, to be paid off over 30 years, interest-free. What a deal! Sign right here! Better act fast, this offer won’t last long! Ultimately, slightly more than 200 families of cold-tolerant Scandinavian descent were selected and in April 1935 the first families were on their way. All of the colonists were to join up in San Francisco where they would be loaded onto a ship to steam to Seward, then on to Palmer by rail.

Unfortunately, like most attempts at central planning, things went wrong almost immediately: the land had not yet been surveyed, the local spruce turned out to not be a good building material, and some of the crews that were to construct the houses and barns – transient laborers under a different New Deal project – had not even reached Palmer. The colonists arrived to a wilderness and a tent city to find that most of the best farmland had already been occupied by the earlier homesteaders. Some of the colonists gave up immediately and went home.

The bureaucrats in charge of the project did finally get things sorted out and by October 1935 the crews had completed 140 houses and all of the remaining colonists had shelter, just as winter set in, the individual farm locations being determined by lot.

By 1940, the government had turned over all aspects of the project to the colonists, although by that time, half of them had left the Valley, and within another 8 years, less than 1/3 of the original Matanuska Colonists remained in Palmer. In 1965, there were only 20 of the original families left, an attrition rate of over 90%. Those colonists that endured proved to be an energetic group, forming electric, telephone and marketing cooperatives that continue to exist today.

The undertaking had originally been budgeted at $982,000, but the final cost to the federal government was over $5,000,000. Maybe, instead of loaning each family $3,000 to buy a non-existent farm from the government, it would have made more sense to have just given each family its share of the money the government spent on the Matanuska Colony, $24,630 per family (and those are 1935 dollars, the equivalent of $450,000 today).

Then, again, maybe there’s another way to look at this. Those 20 Matanuska Colonists that endured have profited both themselves and the Palmer community far beyond what the original homesteaders had accomplished. And had the 20 successful colonist families not been sponsored and subsidized by the federal government, would agriculture ever have flourished in this part of the world, even as de minimus as it is today?

Although I neglected to confirm it with our campground hosts, I read in the tourism brochure published by the Palmer Museum and Visitor Center that the farm surrounding and including the Paradise Alaska RV Park we’ve been staying at is still in the ownership of the descendants of one of those original colonists as a working dairy farm.

As the Fair wound down, the campground emptied and we soon had the place almost entirely to ourselves. Just us and the cows.

One thought on “Palmer and the Mat-Su Valley”