Known as Mt. McKinley until it was renamed by the Obama administration in 2015, “Denali” is the highest peak in North America with a summit elevation of 20,310 feet. The mountain is so tall that we were easily able to see it through our windshield more than 100 miles distant, even before we reached Willow as we drove north from Palmer on the Parks Highway, AK-3 (top photo, below).

Denali is the centerpiece of Denali National Park and Preserve and we had views of that great mountain throughout our 215 mile drive to Denali RV Park & Motel (the “Motel” part is a misnomer), our campsite for the next few days, although Denali disappeared as we neared our destination, hidden by the rest of the Alaskan Range due to the height of those mountains (bottom photo). 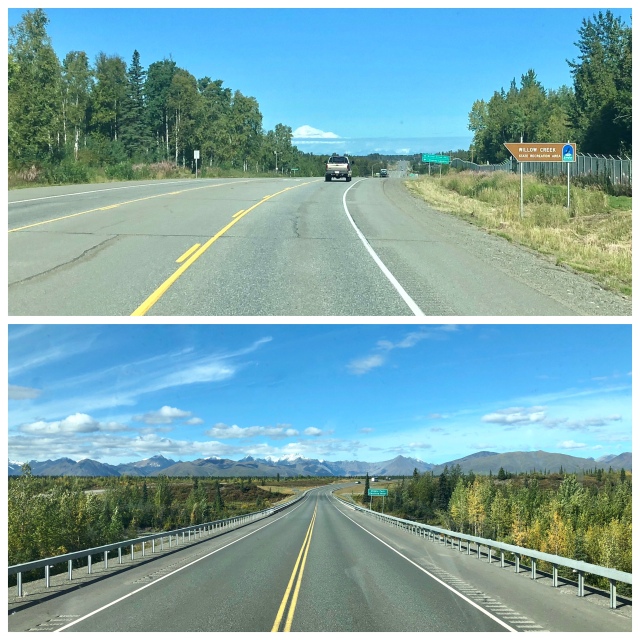 We arrived in Denali late in the day Wednesday, August 29, got the RV set up, ate dinner and went to sleep. The next morning, we awoke to rain. After stopping briefly Thursday morning at the Park’s Visitor Center to register for next week’s campsite and to pick up Park bus passes, we decided to drive the 115 miles further north on the Parks Highway to see Fairbanks.

Fairbanks – a gold mining town that grew into a city to support first the military, and then the oil industry – had not originally been on our itinerary for the simple reason that, in spite of it being Alaska’s second largest city, it didn’t appear to us that there was much there for a non-resident to see or do. Visiting the place has not changed my mind about that. We stayed just long enough to have a meal, then turned around and drove the 115 miles back to Denali. Nothing to see here, move along, move along.

Fairbanks did, however, mark the northern-most point of our trip. From Denali, we will retrace our steps to Whittier where we will catch the Alaska Marine Highway Ferry home to Bellingham. Here’s a map of our journey in Alaska; a map of our trip prior to reaching Haines, Alaska, can be found here:

When the rain stopped for a few hours on Friday, we drove into Denali NP to the main Visitors’ Center to get maps and trail information and to sign up for a ranger-guided hike on Saturday. As we were leaving the building, Dale noticed a handful of visitors pointing into the bushes at the edge of the patio. I walked over and pulled back some branches and nearly jumped out of my skin when I found myself staring straight into the face of a full-grown moose!

We backed up and walked around to the walkway to get a better and safer view and discovered that the moose was a mother and her calf was right next to her. Mother moose continued foraging in the bushes while her calf wandered out onto the walkway. Soon a crowd gathered and the pair of mooses (meese?) made their way over to a planter area and started munching away as the rangers finally woke up and started moving people back. Having their fill of the plants on display, cow and calf ambled over to the nearby wooded area to see what else they could find. Besides our sea lion surprise while kayaking in Glacier Bay, this was the next most incredible wildlife encounter of the trip. 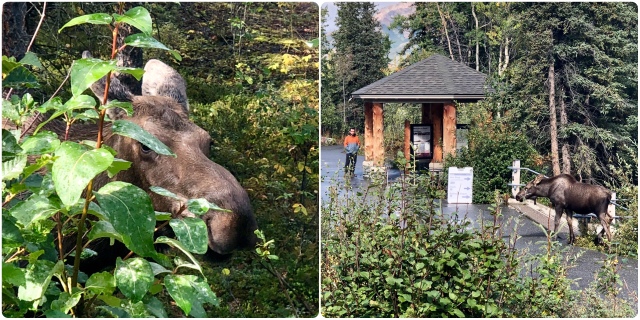 Leaving the main Visitor Center, we drove a couple miles further into the Park to see the huskies, actual working dogs that pull dog sleds for the rangers who monitor the Park during winter. We enjoyed the dog sled mushing demonstration and were amazed at how much these dogs are self-motivated to pull the sled. It gave credence to Jack London’s depiction of mushing in Call of the Wild which I read earlier on the trip.

The only way to access the interior of Denali National Park is the 92-mile long Denali Park Road. Although the first 15 miles are open to vehicular traffic to Savage River, beyond that the only way to continue on the Park Road is as a passenger in one of the concessionaire-operated park buses.

There are two exceptions to the “no cars past Savage River” rule. One is that for each of the last couple days before the road is closed in mid-September, the Park Service permits 400 cars, selected by lottery, to drive the length of the road. Those days must be total chaos. The other exception is for people who have registered to camp at one of the 53 campsites at Teklanika River Campground, the only campground of the four beyond Savage River that accommodates RVs.

We are registered to camp for a few days at Teklanika River Campground at mile 29, so to see what’s ahead, we drove into the Park as far as we were allowed. The views from the Park Road were amazing: 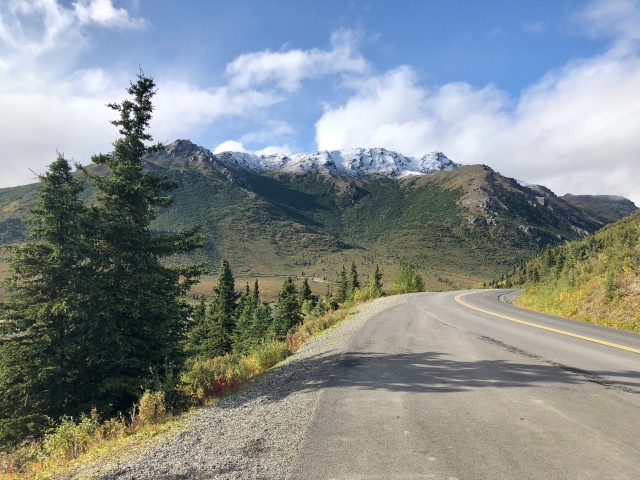 But for now, we have to return to our campground outside the Park where we will be staying until Monday, the last day of the 3-day Labor Day weekend. Hopefully, the crowds will have gone by then and we’ll have good weather for our time inside the Park.