Our day started relatively early Saturday, leaving the Denali National Park “Wilderness Access Center” (the politically correct way to say “bus depot”) on one of the green park buses at 8:00 a.m. We were going on a ranger-guided “Disco Hike” (short for “Discovery Hike”) and our bus driver introduced himself as “Disco Dale,” a 25-year veteran of Denali bus driving and a friendly and informative fellow so in love with this place that when he got married a few years ago, he and his wife chose Polychrome Overlook on the Park Road as the place to exchange their wedding vows.

We were headed for mile 59 of the Park Road, Stoney Creek, but first we had to stop at the Toklat River Rest Stop (mile 53) to pick up our guide, Ranger Tandy. On the way to Toklat River, Disco Dale vigilantly scanned the surrounding terrain for wildlife, stopping once before Sable Pass (mile 38) to point out a large herd of Dall sheep up on the hillside to the north. Two other times, he spotted Grizzly Bears foraging on berries, one of which is the blackish figure, lower center in the photo, below.

By the time we went over Sable Pass we had climbed above the tree-line; the scenery was beautiful, nonetheless. 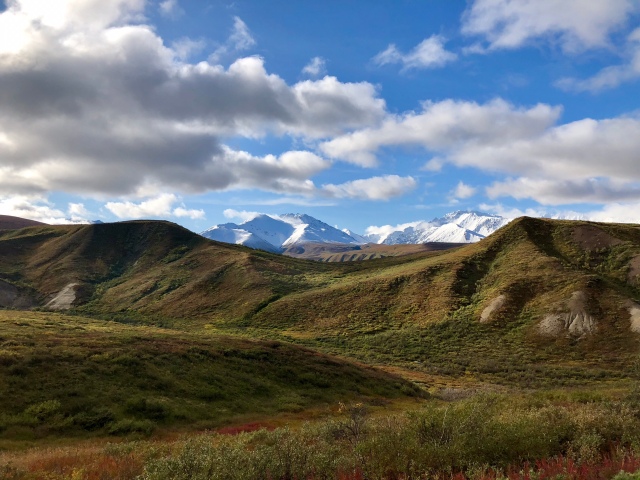 Beyond the check point back at Savage River (mile 15), the road changed from pavement to gravel. Disco Dale pointed out that the Park Service road crews spray the gravel periodically with a chemical solution to harden the surface and to keep the dust down.

As we climbed ever higher on our approach to Polychrome Pass, a Golden Eagle appeared, gliding alongside us, then dipping out of sight only to soar straight up in front of us, catching an updraft that lifted him over and above the bus as we motored by. 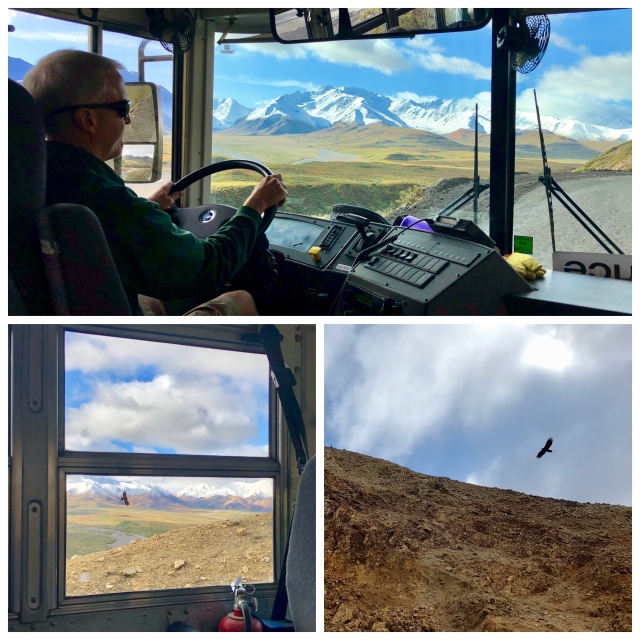 The drive to get up to the Polychrome Overlook was hair-raising, to say the least. I was following our route on a topographic map on my iPhone and at one point the drop-off along this unprotected stretch of one-lane road was 275 feet straight down. I can’t imagine what it will be like in a couple days when the buses stop running and 400 lucky lotto winners are unleashed onto the Park Road in their personal vehicles.

There’s a great view of the Polychrome Glacier’s drainage into the Toklat River along this stretch, assuming you can make yourself look out the window. The Toklat, like all of the rivers on this northern side of the Alaska Range, flows to the north, ultimately into the Yukon, thence into the Bering Sea.

We stopped on the road for a few minutes at Polychrome Overlook (mile 46) where Disco Dale and his bride said their nuptials a few years ago. Ancient volcanoes created the rocks that give the distant hills their polychrome appearance.

With Ranger Tandy on board a few miles further on, we made our way to Stoney Creek, but just before we arrived at our drop-off point, mile 59, Tandy’s radio crackled with news that the road might soon be closed due to a “bear kill” at mile 58.

Bear kill? What!?! What do you mean, “bear kill?” Did somebody get killed by a bear?

No. As it turned out, an adult male Grizzly had killed a cub, either for food or to preempt future competition – the rationale for these infanticides remains uncertain – as its mother helplessly looked on.

We stopped and watched the action through binoculars from the bus until the voice on the radio said that another ranger was now on site monitoring the situation and it was safe for us to go on to the site of our nearby hike. We drove a mile down the road and disembarked, a dozen not-so-excited-to-be-hiking-near-a-bear-kill hikers. Dale managed a smile as we started our hike near the Park Road bridge over Stoney Creek, a little after noon.

This part of the Park is mostly discontinuous permafrost overlain with tundra, found in this area generally above tree-line at about 3,500 feet. We started our hike 100 feet higher than that with a crossing of an expanse of flat tundra, followed by a climb to 4,100 feet.

Tundra, typically in the form of a rolling, treeless plain, covers 10% of the surface of the earth’s land mass. It is found in places with frozen subsoils (permafrost), poorly drained soil (if any) having few nutrients, strong winds and extremely cold climate with short, slightly warm growing seasons.

According to Alaska Science Nuggets, by Neil Davis (2008):

In the tundra of arctic and alpine climates there are relatively few species of plants. Plants there undergo great mechanical stress through rupture of [their] roots as the soil freezes and thaws and as the wind abrades any part of the plant sticking up above the rocks or snow.

Consequently, the plants that make up the tundra in this part of Denali are low-lying mosses, lichens, grasses and dwarf shrubs like the willow, blueberry, bearberry and crowberry we hiked through.

Since early September is the end of the “warm growing season,” the upper, active layer of the permafrost here has melted, making the ground boggy and spongy underfoot, like walking on memory-foam. We feasted on low-lying blueberries as we picked our way across the tundra, careful not to turn an ankle or soak our hiking shoes. As we began our ascent, through binoculars we kept a watchful eye on the male and female Grizzlies back at the “kill zone” across the valley. 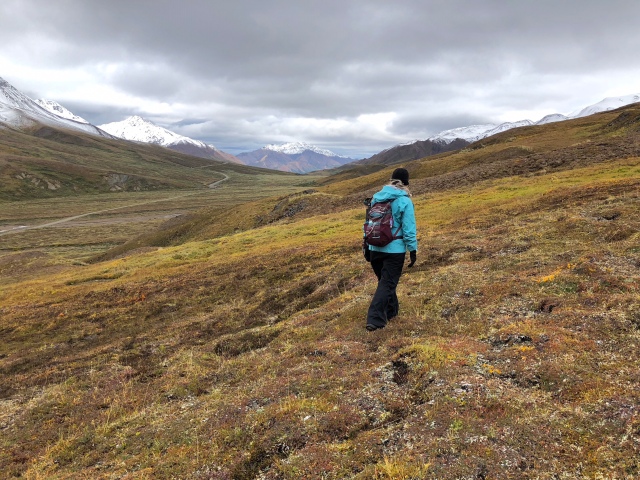 After an hour or so, in view of Stoney Dome (Stoney Hill on some maps), we stopped for a lunch break.

Unfortunately, while we ate, the bears disappeared from view. Out of caution, Ranger Tandy decided to modify our route to return via the stream bed of Stoney Creek, rather than continuing east toward the bears’ last known location. We headed down.

No thanks. It’s 40°F and we have a 3-hour bus ride back to our car at the bus depot; not doing that in wet socks, shoes and pants. Nope, count these explorers out, but thanks, all the same. Besides, we already know how to do river crossings (we spent an entire day hiking in rivers in Vietnam just a couple months ago). 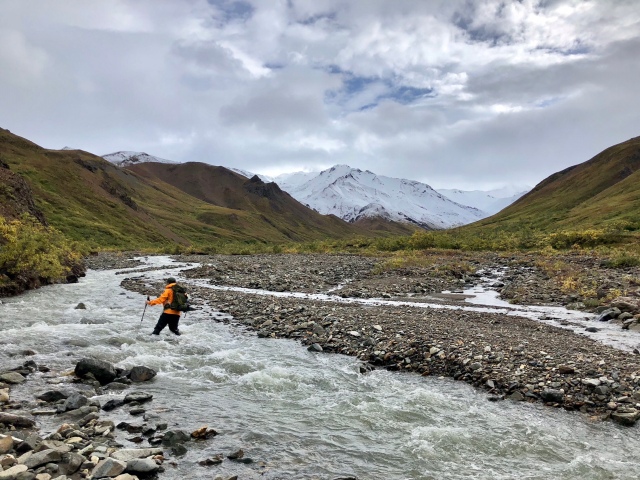 Tandy did have a couple takers, but, like us, most opted out. Afterward, we straggled back to the road where we caught a “sweeper” bus, sent out on the Park Road to collect us and anyone else hiking along the road this late in the day. It was 3:30 p.m.

The next day, we took another park bus past Stoney Creek and I was able to take a photo of the area from a distance. The bridge you see in the photo, below, just left of center, is where we finished after hiking to the top of the hill beyond it.

It was a very enjoyable day, but I have to say that I prefer alpine trail hiking over treking through tundra. Unfortunately, we’re discovering that most of the hiking in Denali NP north of the Alaska Range is off-trail through tundra at the end of a lengthy bus ride. Perhaps we’ll shorten our stay here by a day or two.