The road from Tok to Glennallen is the worst we’ve traveled so far and I suspect it may prove to be the most damaged pavement we will encounter on this trip. Most of the length of this segment of highway is one frost heave or subsidence after another, making the ride more of a rollercoaster than a drive. Below are a few examples of the roadbed we encountered. I was unable to photograph the really bad sections, including many where several feet of pavement along the edges had eroded, because I had to keep both hands on the wheel.

Frost heaves and subsidence are prevalent along this length of roadway because the entire Tok Cut-Off traverses permafrost, that is, perennially frozen ground where the mean temperature of the soil has remained below freezing for at least 2 years. In summer, the upper “active layer” of soil thaws and becomes boggy but the underlying frozen soil, often hundreds of feet deep, remains frozen year-round and does not drain. Consequently, when winter arrives, the wet active layer and trapped water freeze again, lifting and often cracking and splitting the pavement.

According to a study done at the University of Alaska in 2008, permafrost zones underlie 80% of Alaska in the following proportions: continuous (32%), discontinuous (31%), sporadic (8%), and isolated (10%); glaciers and ice sheets occupy 4% of the state. Canada is similarly underlain with permafrost (55%).

Continuous permafrost – where permafrost covers 90% or more of a contiguous area – is found in the very cold regions of the earth such as above the Arctic Circle (latitude 66°30’N) and at elevations above timberline. The frigid conditions there result in trees being unable to grow, most of the landscape consisting instead of tundra: large stretches of bare ground or rock covered with moss, lichen and low growing shrubs. In the northern hemisphere, tundra is only found above latitude 60°N; it covers around 10% of the earth’s land mass. We will likely hike in tundra when we visit Denali NP later on this trip.

South of the northern tundra is the taiga, more commonly referred to as the boreal – or northern – forest. The boreal forest is adapted to areas of moderate to high precipitation with long, very cold winters, followed by short growing seasons of long days, and is populated by conifers such as spruce, pine, fir and larch and deciduous trees like poplar and birch. The boreal forest covers 17% of the earth’s land surface and can thrive in discontinuous (50-90% surface area coverage), sporadic (10-50%) and isolated (<10%) permafrost.

On the map, below, I’ve outlined our route in red. The most northern point of our journey so far has been Tok, after which we headed south along the western edge of Wrangell-St.Elias NP, ultimately to Valdez on the Gulf of Alaska where we are now. You can see that our travel through British Columbia (to the 60th parallel) was not in heavy permafrost and only the northern half of BC was in boreal forest. From Haines, going north, we drove briefly through discontinuous permafrost in the Yukon along the eastern edge of Kluane NP, mostly through boreal forests of white spruce, quaking aspen and cottonwood. But heading south from Tok on the Tok Cut-Off, we finally drove across a pocket of continuous permafrost, hence the bad road. 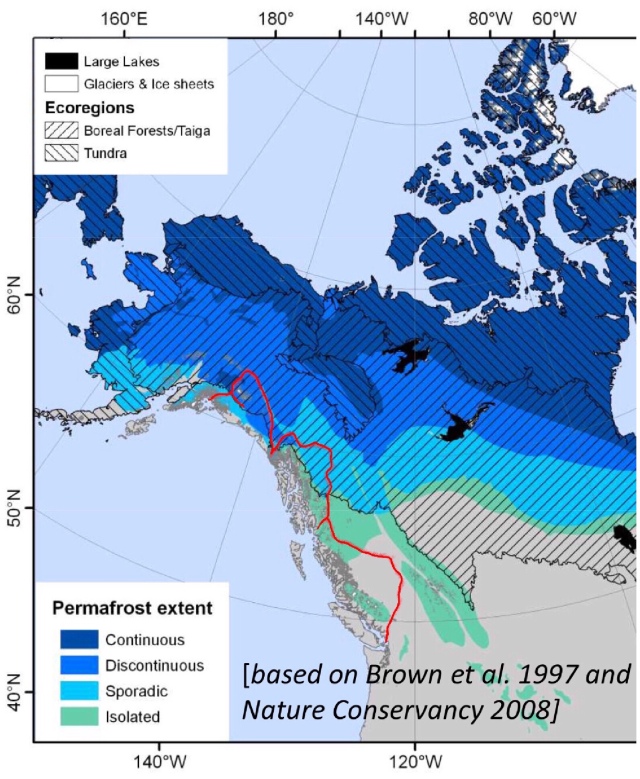 As we followed the Copper River south from the Nabesna Road junction with the Tok Cut-Off, we could clearly see Mt. Drum (elev. 12,010 feet) off to the east.

After getting the RV set up at Northern Nights Campground in Glennallen, a settlement at the junction of the Tok Cut-Off and the Glenn and Richardson Highways, we drove the Jeep south on the Richardson Highway toward Copper Center, stopping enroute at a scenic overlook. From atop the bluff looking north, we could see how the Copper River has eroded its western bank. Turning slightly to the the right to look southeast and downstream, we surveyed a huge boreal forest dominated by black spruce that has grown on top an ancient lake bed.

Our destination, however, lay 20 miles further south, a turn off just before the “funny mailboxes,” to see the Trans-Alaska Pipeline: 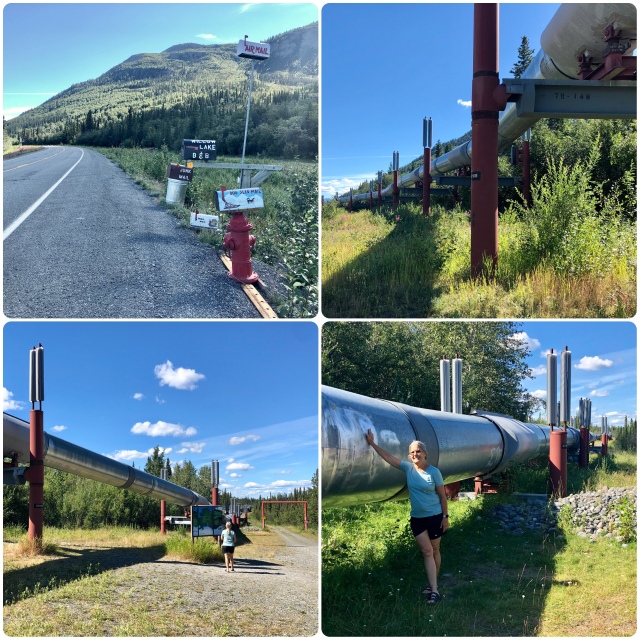 Oil was discovered in Prudhoe Bay on the North Slope between the Brooks Range and the Bering Sea in 1968. It was determined that the best way to extract and deliver the oil to the lower 48 states was via a 4-foot diameter, 800-mile long pipeline running south to the port at Valdez on the Gulf of Alaska, the northernmost ice-free port in the United States, then by tanker south.

Design work began in 1970 and the engineers had several unique problems to contend with. First, because the oil that flows through the pipeline has to be heated to keep flowing, the permafrost was a problem. In some places the pipeline could be insulated and buried, but where the active layer was shallow, the pipe had to be elevated. Otherwise, it would melt the permafrost, making the ground unstable, threatening the integrity of the pipe (highway engineers have to deal with the same problem when roads are paved as the asphalt absorbs heat from the sun). The solution is shown in the photos, above. The fins you see on the pilings vent heat from below, keeping the pilings and permafrost stable. The second problem was earthquakes. The engineers handled this problem by designing the route in a zig-zag manner so the pipeline could flex without breaking. This design proved itself during a 7.9 quake in November 2002 along the Denali Fault that extended roughly along the path of the Nabesna Road, the pipe able to shift 18′ horizontally and 2.5′ feet vertically without breaking or leaking.

After examining the pipeline, we headed back to Glennallen to change for dinner to celebrate our 36th anniversary at the Copper River Princess Wilderness Lodge, a surprising outpost of civilization in this otherwise remote part of the world:

From the lodge, we were treated to a wonderful view of Mt. Drum (left) and Mt. Wrangell (right), a shield volcano, the only one currently active in the National Park at the present time.

On our way back to Glennallen at the Golden Hour, I couldn’t resist stopping for one more look at Mt. Drum before returning to our RV home for the night. 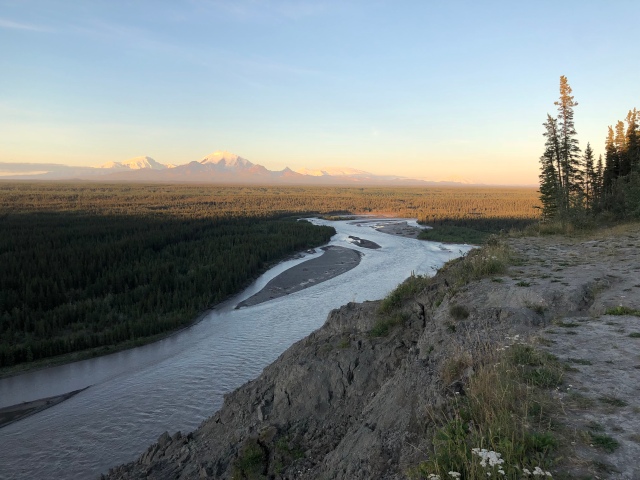