The morning after our Disco Hike at Stoney Creek we drove the RV into Denali on the Park Road, stopping briefly at the ranger checkpoint just past the bridge over Savage River. That green bus to the right in the photo, below, is one of the park buses that run the length of Park Road about every half hour, delivering and picking up sightseers and hikers. The round-trip from the bus depot to the end of the road at Kantishna, mile 92, takes 12 hours and costs $60. There are tan buses, too, but those are the guided tour buses, mostly filled with cruise ship passengers on excursions from Seward or elsewhere in Alaska.

The Park Road is gravel beyond the checkpoint and rises for about a mile up the Primrose Ridge, above the tree-line. We merrily bumped along talking about how great it was to be on the Park Road in our own vehicle, rather than in one of those green park buses. Cresting the ridge we were surprised by an adult caribou plodding toward us on the road. We stopped and turned off the engine. Unfazed by our presence, this solitary ungulate walked on by, head-faking our way at one point, making me think he was going to walk over to the RV (upper middle in photo, below).

Ungulates are mammals with hooves; they are nearly all herbivores with 360° vision due to their eyes being on the sides of their heads. There are about 450 species of ungulate, divided into two groups: those with an even number of toes, like goats, pigs, sheep, cattle, hippos, camels and deer – which includes the subspecies of caribou, moose and elk; and those with an odd number of toes, such as horses and rhinos.

The Denali Herd of Barren-ground Caribou is estimated to fluctuate around 2,500 members. Alaska has about 700,000 caribou, divided into 32 recognized herds. Europeans call these animals “reindeer” and we saw the domesticated Nordic subspecies herded by the native Sámi when we visited northern Sweden two years ago; they appear to be considerably smaller than the caribou here in Denali.

Based on the size of its body and antlers and the lack of a white rump, I suspect that the caribou in the photos, below, is a young bull, but I can’t be sure because both males and females have antlers, unlike other deer.

We drove on for about 45 minutes, pulling into Teklanika Campground at mile 29. “Tek,” as the rangers call it, is a dry campground, that is, there are no utility hookups of any kind. Consequently, the only thing required for us to set up camp was to find a vacant campsite and park. Having done so, we grabbed our day-packs and raced back out to the Park Road to wave down the 1:25 p.m. bus to Eielson Visitor Center to get a view of Denali on this clear day. Aboard the bus, we got our first glimpse an hour later as we passed Toklat River at mile 53 (if you’re not doing the math, the speed limit on most of the Park Road is 25 mph).

There are more than 65 mountains higher than an elevation of 10,000 feet in Alaska, but greatest of all is Denali (native Athabaskan for “the High One”), over twice as big. Not only is Denali the tallest mountain in North America, it is also the tallest in the world when measured by vertical rise: 18,000 feet from base to summit. The first man to set foot on that summit was, appropriately, a native Athabaskan, Walter Harper, in 1913. With modern equipment and a well-worn route up the mountain, thousands have reached the top since then, including more than 495 in 2017 alone.

Here’s the view of Denali from Stony Hill Overlook at mile 62 – Denali is still 24 miles away. Although we were 4 miles closer to the mountain when we reached Eielson Visitor Center at mile 66, this was the better view. 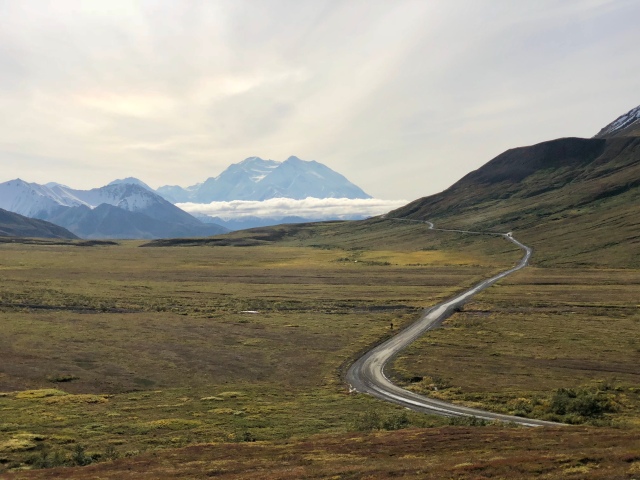 Denali NP is bisected by both the mountains of the Alaska Range and the Denali Fault. Earthquakes are not uncommon here. In fact, when we visited the Park 18 years ago with our kids, we experienced a minor tremor while staying in the Park at the Denali Backcountry Lodge near Wonder Lake. The Park Service website has this to say about the geography of the Park:

Because the Pacific Plate continues to collide with and slide beneath Alaska, the buckling and uplift continues, creating a seismically active area around Denali. Generally following the Alaska Range, the Denali fault system extends for about 750 miles (1200 km). In November of 2002, the magnitude 7.9 earthquake centered on the Denali fault east of the park ruptured the surface with up to 30 feet (9 m) of strike-slip offset.

Our bus only stayed at Eielson for a half hour, not enough time to hike very far from the Visitor Center. The drive back around Polychrome Pass wasn’t any less sweat-inducing than going the other way: 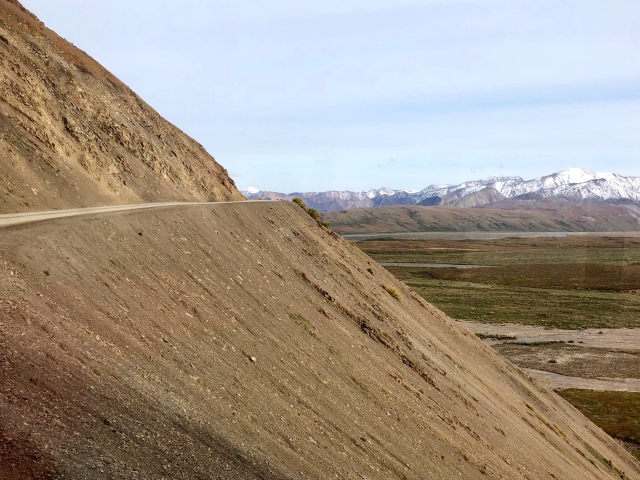 To divert our attention from glancing down at the drop-off along the edge of the roadway, we talked about the distant scene, trying to find an explanation for the consistent snow-line we could see. I’m guessing that’s the elevation at which the temperature is at the freezing point, 32°F, 0°C. This is new snow, by the way. They say it can snow any time of year in Denali NP.

Back at Tek Campground around dinner time, we turned on the gas heater and had a bite to eat before calling it an early night. Tek Campground is located at an elevation of 2,500 feet, right at the tree-line. As I mentioned in my last post, tundra starts around elevation 3,500. The boreal forest lies below 2,500 feet. We are camped in the transitional zone between the two, a subalpine zone of scrub vegetation including alder and willow and open spruce woodland.

The next morning, we decided that we had seen and done everything we had wanted to in the Park during the six days we had already been in Denali, so we decided to shorten our time at Tek, opting to use the extra two days to drive the scenic parts of the Richardson and Glenn Highways between Delta Junction and Palmer. We stayed in the Park until 11:00 a.m., then started the drive back toward the Park entrance.

Leaving Tek, the Park Road descends into the boreal forest, the well-drained parts along the rivers and on the slopes having a southern exposure are populated by white spruce and paper birch and some balsam poplar and trembling aspen. Where there is permafrost, the trees are mostly spindly black spruce. You can see the black spruce to the right in the photo, below; the trees on the left are mostly white spruce.

As we drove along, we noticed that the road had been graded since we came in the day before. We soon passed the road crew and one of the more unusual grading machines I have seen.

Descending from Primrose Ridge, we could see the checkpoint at Savage River up ahead. We also noticed, for the first time, the odd rocky feature just beyond it, an outcropping of schist, a metamorphic, crystalline rock, that supposedly looks like a man’s face, turned skyward. I don’t see it, maybe you do.

A couple miles further up the road, we came upon one of the tan tour buses, stopped in the middle of the road, so we slowed down, stopped and turned off the engine. Then, off to the right we saw a young male moose. He leisurely wandered across the road directly in front of us.

Then we realized that he was not alone! There was another moose, slightly more mature, also over to the right, and he, too, eventually, bounded across the road directly in front of us. I was able photograph them through the open side windows…

… as they sauntered slowly away.

They say that Denali has two seasons: summer and winter. Down near the Park entrance, it looks like they also get about 24 hours of autumn where the leaves on the few deciduous trees are turning. Winter is right around the corner.

What better time to visit the North Pole!

4 thoughts on “Ungulates of Denali”