Thursday, September 6th, found us back for a few nights at Alaska Paradise RV Park in Palmer to prepare for our upcoming ferry ride back to the Lower 48: cleaning the RV and Jeep, doing laundry, packing carry-ons for the boat, clearing out the refrigerator, getting everything stowed and going out for a bon voyage dinner in nearby Wasilla.

But we had one more hiking excursion to go on before leaving Alaska, the one I mentioned in my last post, a hike on Matanuska Glacier, clearly a safer option than tromping through the nearby Talkeetna or Chugach Mountains in light of the fact that the first 2 weeks of September are the height of hunting season.

We drove east Friday morning on the Glenn Highway, following the Matanuska River up to its headwater at the glacier. It’s a very scenic drive in either direction. 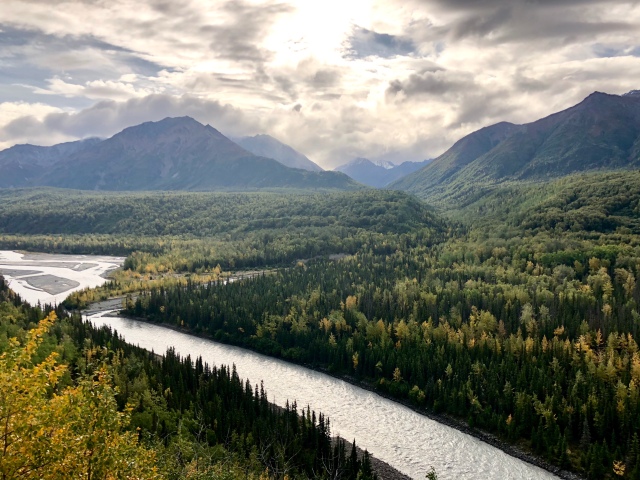 The Matanuska Glacier is 60 miles east of Palmer and just over 100 miles from Anchorage. I pulled off at the scenic overlook at mile marker 101 to take a picture of the glacier’s terminus. To physically get to the glacier on foot, you have to turn off the Glenn Highway onto an access road at mile 102 that winds steeply down to the valley below, then crosses the river over a rickety wooden bridge. The access road runs across private property and the owner charges $30 per person for passage over the final 2 miles to the glacier.

The glacier itself is 27 miles long and averages 4 miles wide. It has been stable for many years, as evidenced by the supraglacial moraine now well established on its surface, that is, the rocks, gravel and sediment that cover the front and sides of its low-lying ice, as you can see in the photos, below.

Most people hire a local guide to hike out onto the ice, but since we had our own trekking poles and micro-spikes (and having hiked on glaciers with guides several times now), we felt comfortable going on our own. The trail out to the clear ice is marked with orange cones and it’s important not to stray from the well-traveled and marked path. 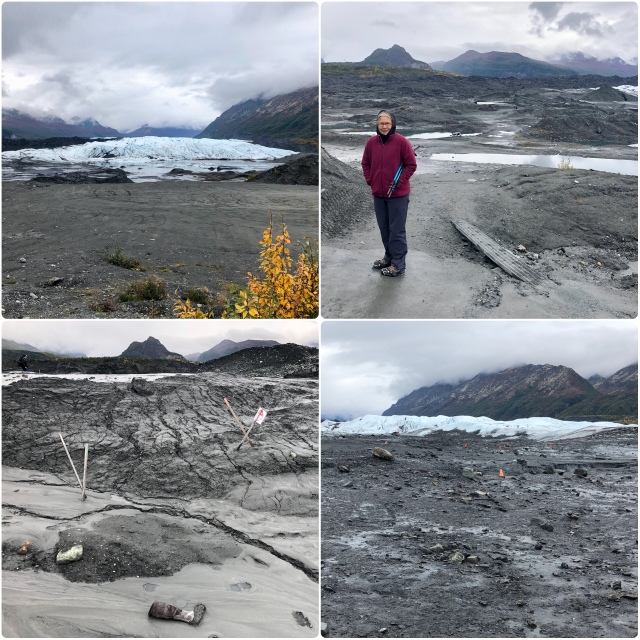 That boot above is stuck in quicksand-like muck, but the photo below, although it looks like water and mud, is actually black ice – very slippery if you’re not wearing crampons or micro-spikes. We walked on across it, then followed the cones around to the left. Beyond that pile of debris we could see the toe of the glacier.

We were not alone on the ice. There were a number of guided groups up ahead, some making their way up and over the higher sections.

We walked about a mile out on the ice to where the crevasses became deeper and more numerous, where we turned around and headed back…

… following rivulets that turned into streams that yielded to surface moraines of glacial flour and the occasional erratic boulder. Along the perimeter of the glacier, vegetation was creeping onto the ice, trying to find a foothold in the till.

On the drive back to Palmer, we passed Chikaloon, nowadays just a single building, the post office (top left, below). We didn’t stop, continuing instead down the road a few miles to Sutton where the Chikaloon coal works and railroad depot used to be in the 1920s..

The local historical society has renovated and moved several old buildings and pieces of mining equipment to Sutton next to the foundation of the abandoned Chikaloon coal dryer and loading facility (I wrote briefly about Chikaloon and its coal in a prior post that you can read here). I found several things here that were quite interesting: the native Indian winter cabin (top right); the walled-tent similar to those that housed the original Matanuska Colonists in Palmer (bottom left); and the chain-driven, tracked digging machine, a technological wonder in the 1920s (bottom right): 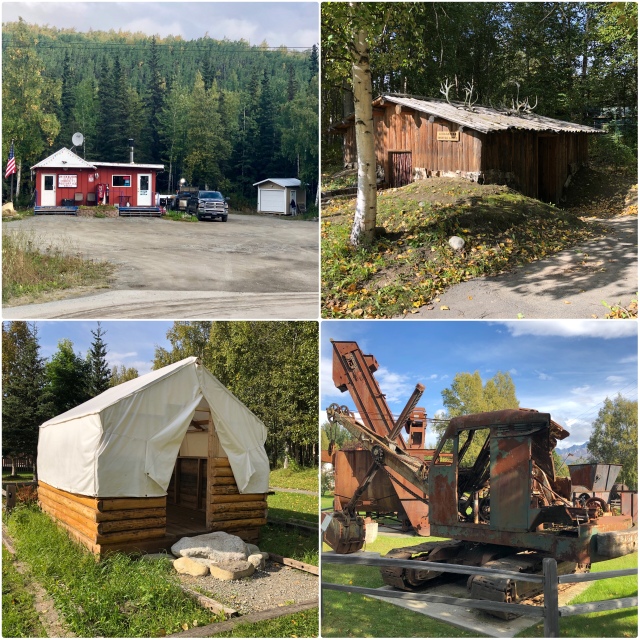 We continued down the Glenn Highway to Palmer, once again parallel to the Matanuska River. This photo was taken from the same location as the photo at the top of this post, but this time looking west:

It was a nice way to end our days in Alaska. Now on to Whittier!