Today is the final day of our kayaking adventure, a Wednesday. And as much as I would prefer not to, it’s time to begin thinking again in those terms: Wednesday, a working day, back in the “real” world.

I have spent longer stretches away from city life: six weeks at sea, crossing the Atlantic; a month on a boat in the Bahama Islands, exploring the Exumas; but that was years ago. I had forgotten what it was like to be away from modern luxuries for an extended period and the need to be always cognizant of time and date, rather than place (during the trip, I kept track of the days simply as Day 1, 2, … 10, adding dates after-the-fact).

Our days will no longer be guided by circadian rhythms. Now there will be a different tempo to life: work days and weekends, opening and closing hours, the pulse of modern civilization.

I have finished reading Mario’s favorite book, Pedro Páramo, and though it wouldn’t be on my Best Seller List, this passage (p. 58) moved me:

You’ll see why a person would want to live [here] forever. Dawn, morning, mid-day, night: always the same, except for the changes in the air. The air changes the color of things [here]. And life whirs by as quiet as a murmur . . . the pure murmuring of life….

Ironically, I will soon be putting away the watch I have been wearing during our time on the water, a Tissot T-Touch, bought nearly two decades ago before the price sky-rocketed. I wear this watch on outdoor excursions – not to tell time, but because of its other functions: compass, altimeter, barometer and thermometer.

That’s how I know that this, our last day, was also our hottest: 92°F. But the water was relatively cool, in addition to being clear and mesmerizing.

As we paddled south to Punta Coyote, we passed El Portugués, a settlement of Portuguese fishermen. I have no idea how they ended up here, but they did. Lino motored along with us, out in deeper waters.

We stayed close to shore where we could see down through the water to the bottom, watching for fish and other marine life, like skin diving without mask and fins.

I eventually paddled further out in order to be able to see the passing terrain. The sky was cloudless in every direction.

Finally, in sight of the finish line: “We made it!” 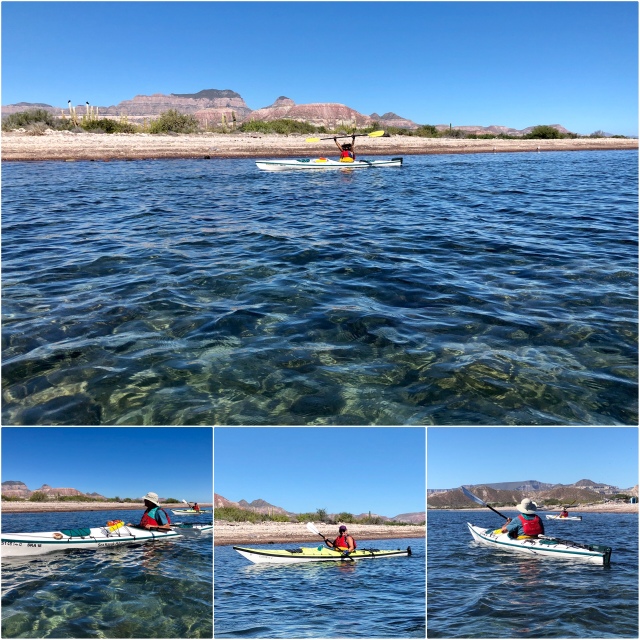 Approaching the takeout point we were greeted by a squadron of gulls and a flotilla of pelicans.

Mario’s and Lino’s boss was there to greet us and help with the kayaks. But, more importantly for some, he also had brought lunch: homemade tamales.

Landed, safe and sound, at Punta Coyote, 7 miles south of our launch this morning at Ensenada Verde.

Although Punta Coyote is 61 miles distant from Agua Verde “as the crow flies,” we had paddled 71.

From here, Lino would return home to Loreto with the panga and Mario would accompany us to La Paz in the van. We would leave these two just as we had encountered them: in Loreto and La Paz; start and finish; rural and urban; traditional and modern Baja California Sur. It struck me that two individuals could not be more different, yet get along so well. The romantic and the pragmatist.

I now understand why Pedro Páramo is Mario’s favorite book. On the back cover, Juan Rulfo’s style is called “magical realism” and his book is characterized as

“A masterpiece of the surreal, this stunning novel from Mexico depicts a man’s strange quest for his heritage.”

Lino was born a native of Baja California; Mario has become one.

We ate our tamales near the chapel at Punta Coyote, unattended on a weekday, then loaded up the van for our 2.5 hour drive to La Paz (a second van took the kayaks back to Loreto).

The road to La Paz hugged the shoreline for a while, the dirt road eventually giving way to pavement through the desert with its cactus, roadside shrines, burros tethered in the shade of mesquite trees, and a smattering of derelict shanties along the way, but no modern development to speak of.

I will miss this place. Post Script: We were eventually dropped off at our hotel in La Paz, the Seven Crown La Paz Centro. Our carry-ons had been transported there from Loreto 10 days earlier, so we showered and changed into clean clothes before going for a short walk down to the Malecón, the waterfront promenade (top left in photo, below), before having a farewell dinner at Rancho Viejo with Scott, Barb and Mario. On Friday morning, we caught our flight out of La Paz airport bound for Mexico City, with connections to Florida where we were going to be with our son and daughter-in-law, Kyle and Hannah, for the birth of their firstborn, our first grandchild, one of the few things better than kayaking in Baja California Sur.